The Art of Ice-Hockey Goaltending. The Oracle of Ice Hockey. I. 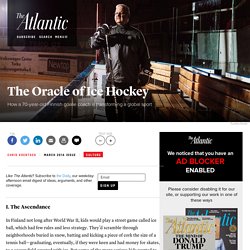 The Ascendance In Finland not long after World War II, kids would play a street game called ice ball, which had few rules and less strategy. They’d scramble through neighborhoods buried in snow, batting and kicking a piece of cork the size of a tennis ball—graduating, eventually, if they were keen and had money for skates, to a soccer field covered with ice. But some of the more serious kids wanted to play hockey. 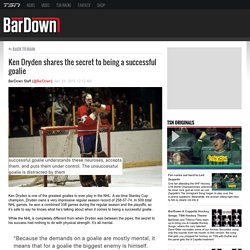 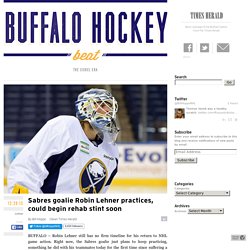 Capitals’ odd couple of Braden Holtby and Mitch Korn is getting high ratings. Save Percentage And The Lies We Tell Ourselves - The Goalie Magazine - InGoalMag.com. Save Percentage — in all of its forms — is currently indispensable to goaltender evaluation. 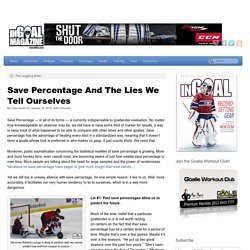 Jonathan Bernier, as is his custom, didn’t make us wait long. The man formerly known as the Toronto Maple Leafs No. 1 goaltender hardly even waved at the second puck sent his way while it went knuckling by at 3:43 of the first period. Reimer's Head Trajectory Use Featured On HNIC - The Goalie Magazine - InGoalMag.com. During this weekend’s Hockey Night in Canada broadcast, former NHLer Kelly Hrudey dedicated a segment during intermission to Lyle Mast’s head trajectory technique. 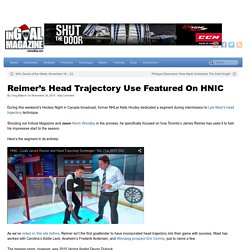 Shouting out InGoal Magazine and Jason Kevin Woodley in the process, he specifically focused on how Toronto’s James Reimer has used it to fuel his impressive start to the season. Closing Holes for fewer Goals! An In depth look at hip, groin and adductor movements. More than ever, athletes of all sports are focusing on muscular mobility rather than sheer strength, power, and agility in order to better perform their duties. 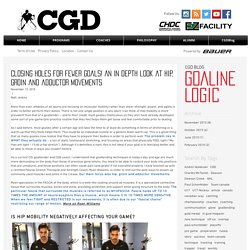 There is not one single position in any sport I can think of that mobility is more prevalent than that of a goaltender – and to their credit, most goalies (meticulous as they are) have already developed some sort of pre-game/pre-practice routine that they feel helps them get loose and feel comfortable prior to skating. As I said before, most goalies after a certain age will take the time to at least do something in terms of stretching or a warm-up that they think helps them. Biron voices frustration with bad-angle goals. If he could do it over and over again, Braden Holtby says he would stop Andreas Athanasiou’s bad-angle, game-winning shot Tuesday night 999 straight times. 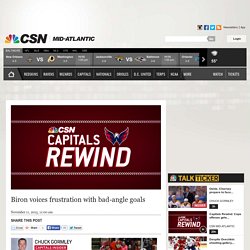 Practice[edit] Mantra[edit] Selection[edit] A Guide to VO2 Max. VO2 max has been defined as: "the highest rate of oxygen consumption attainable during maximal or exhaustive exercise" (3). 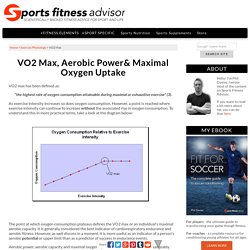 As exercise intensity increases so does oxygen consumption. However, a point is reached where exercise intensity can continue to increase without the associated rise in oxygen consumption. Flexibility Training... Stretching For Sport And Athletes. Ice Hockey Training & Conditioning. An ice hockey training plan should develop a combination of aerobic power, strength and muscle bulk, explosive speed and power as well as good anaerobic endurance. 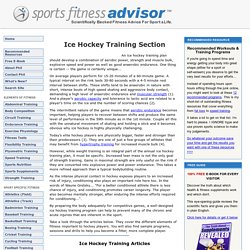 One thing is certain -- the game is certainly unique... On average players perform for 15-20 minutes of a 60-minute game. STRENGTH SENSEI. MIT Sloan Sports Analytics Conference. Encouraged by fans’ desire to cheer passionately for their favorite teams every game of the season, I respectfully propose that draft order should be determined by performance after mathematical elimination. Analysis of historical data suggests optimistic statistical methods based on functions of winning can end tanking in sports.

I hypothesize that when the incentive for teams to intentionally handicap themselves is removed, the expected elimination draft order is highly correlated with the expected reverse standings. The risk of allowing a poorly performing team to lose the top draft pick is outweighed by the benefit of eliciting intense competition, inspiring fans’ interest, and preserving sports’ integrity. Matt Rognlie. Goalie Yoga Designed Specifically for Reverse VH - The Goalie Magazine - InGoalMag.com.