7 Tips & Tricks To Get The Most Out Of Google Drive 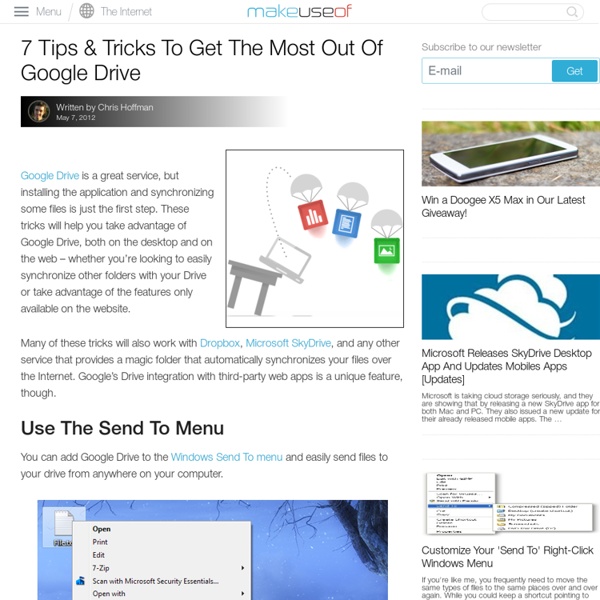 Google Drive is a great service, but installing the application and synchronizing some files is just the first step. These tricks will help you take advantage of Google Drive, both on the desktop and on the web – whether you’re looking to easily synchronize other folders with your Drive or take advantage of the features only available on the website. Many of these tricks will also work with Dropbox, Microsoft SkyDrive, and any other service that provides a magic folder that automatically synchronizes your files over the Internet. Google’s Drive integration with third-party web apps is a unique feature, though. Use The Send To Menu You can add Google Drive to the Windows Send To menu and easily send files to your drive from anywhere on your computer. The Send To menu actually shows the contents of a special folder, and you can add your own shortcuts. %APPDATA%/Microsoft/Windows/SendTo Encrypt Sensitive Files BoxCryptor also supports Google Drive. Move User Folders Customize Windows Libraries

Google Drive vs. Dropbox vs. SkyDrive vs. Amazon Cloud Drive vs. iCloud Cloud services aren’t necessarily a new technology, as IT companies and businesses have been using forms of cloud services in some respects for years now. Even personal cloud storage services for consumers have been around for a few years, but with most of the top technology companies now offering their own versions of cloud storage deployments, more everyday computer users have now made the jump. In today’s post, we will review the most popular cloud services and help you to determine which one may suit you best. When deciding on a quality cloud service, there is a good possibility that you will ultimately go with Dropbox, Apple iCloud, Google Drive (Gdrive), Amazon Cloud Drive or Microsoft Windows SkyDrive, as these are the mainstream offerings of the technology industry’s most influential corporations. UI (User Interface) Using Dropbox Dropbox is a bit different than other cloud offerings in that it is nearly 100% application deployed. Using Google Drive Using Amazon Cloud Drive Android

Hands-on with Google Docs's new research tool Google Docs has unveiled a new research tool meant to help writers streamline their browser-based research, making it easier for them to find and cite the information they need while composing text. The feature, announced Tuesday, appears as an in-page vertical pane on the right side of your Google Doc. (You can see an example of the pane at left.) It can be accessed either through the page’s Tools menu, or with a Command-Option-R keyboard shortcut on your Mac. The tool offers three types of searches: A basic “everything” search, another just for images, and a third featuring quotes about—or by—the subject of your search. In “everything” mode, a search for GOP presidential candidate Mitt Romney brought up a column of images and information. The top Web links for a topic are displayed underneath that roster of information. There is one other search option in research, though it isn’t featured in the menu: A “places” search.

Acceptable Internet Use Policy Your browser does not support JavaScript! This site uses JavaScript but is fully functional without it. Internet Safety in Schools Virginia K-12 educators and students use instructional resources via LAN, WAN, the Internet, wireless and other electronic devices. Schools and divisions are required to establish guidelines for appropriate technology use. Legislation approved by the 2006 General Assembly and signed by Governor Kaine requires that each division's policy include an Internet safety component. Components An AUP must address (1) access to and transmission of data and information within the K-12 environment and (2) any technology-based device in the school or personal device brought into the school. Outside Resources A regularly updated list of resources is available at delicious.com/vdoeinternetsafety Filtering Various laws mandate Internet filtering on school and library computers. The following links provide additional information about filtering options: Top of Page

Self-Publisher Lulu Announces Google Drive Integration While Google's Drive's feature list is making headlines, one feature many may not be aware of is Drive's integration with self-publisher Lulu. Lulu announced integration between the Lulu One-Click Publishing app and the newly released Google Drive on Tuesday — a combination that will allow you to create and collaborate on a project in Google Drive and then publish that project through Lulu with a single click. “Integrating the Lulu One-Click Publishing app with Google Drive is just another way Lulu is working to remove limitations for creators and making publishing easier than ever before,” says Bob Young, CEO and founder of Lulu.com. “Now people can edit content or collaborate on a project with a friend or colleague, then seamlessly publish it so we can all benefit from their remarkable works.” Documents on Google Drive can be published as PDF e-books, or be converted into print books on Lulu.com that can then be sold on the site. What do you think about Lulu's Google Drive integration?

GrowingWithGoogle - home Google Apps for Education and the New Google Drive The long-awaited Google Drive is finally here. The new product, launching today and available at drive.google.com, offers users 5 GB of file storage and syncing and effectively replaces Google Docs (which has offered file storage for a couple of years.) Google Drive also replaces the editing, file-creation and file-sharing features of Google Docs. There’s been plenty of ink spilled already on the news, and lots of coverage about how Google Docs stacks up against some of the other cloud storage options available. But for schools that are Google Apps for Education (and Chromebooks) customers, it’s likely they’ll take advantage of this tool as opposed to one of the alternatives. How Will Google Drive Work for Apps for Education Users? In a nutshell: it’ll work the same as Google Docs. What’s New for Edu? With the launch today, there’s just one app today, from what I can tell, that’s specifically educational: the free graphing calculator Desmos.

Technology for the Community / Google Apps Permission Form Northern Bedford County School District has created email accounts for all students in grades 6‐12 to allow for collaborative sharing using Google Apps for Education. These accounts will be used for school related projects both in school and outside of school to allow students to have direct contact with their teachers as well as their classmates. These accounts, through the Google Apps for Education, provide each student with email, online document access, a calendar, and Google sites (which allow students to create websites both independently and collaboratively). The National Educational Technology Standards for all students in grades K-12 stress the importance of collaboration and communication among students locally as well as on a global level. These accounts will allow students to demonstrate mastery of those standards as well as providing collaborative tools to students and teachers once these accounts are assigned. Google Drive Google Online Calendar Google Sites Google Apps. 1.

The Google Drive FAQ | Internet & Media Got questions about Google's new cloud storage product, Google Drive? Here are some answers. Got more questions? Add them in the comments or e-mail the author; we'll add to the story as needed. What is Google Drive?Google Drive is a way to store your files on Google's servers, or "in the cloud." Google Drive is also the new name for Google Docs, which is Google's suite of Web-based productivity tools -- its word processor, spreadsheet, and presentation app. What do you mean, "sort of?" Files that you drag into your Drive from your hard disk are actually copied to the cloud. What is synchronization? There is a potential danger when using synchronization: If you update a file before your cloud service has sent you the latest version, you can end up with collisions or version conflicts. Just to be clear: I can store any file? You can also move entire folders in your Google Drive. I keep hearing about Dropbox. Google Drive is a big threat to Dropbox, but if you like both, use both . New!

Google Drive - Store Files, Share Files, and Talk About Them Today, Google introduced a new service for saving, sharing, and discussing files online. The new service is called Google Drive and it combines some of the best elements of Google Docs and Google Plus into one package. In fact, Google Docs is now a part of Google Drive. When you upload a file to your Google Drive account you can share it with anyone just like you can share any document in your Google Docs account. You can share files publicly or privately. Watch the video below to learn more about Google Drive. Applications for Education Just like Google Docs, Dropbox, and other online files storage services, Google Drive eliminates the need for flashdrives/ USB drives and eliminates the need to send email attachments in order to share files. Google Drive provides 5GB of free storage which should be more than enough for the vast majority of students. And now I need to go make some updates to Google Docs for Teachers to include information about Google Drive.

google-just-keeps-killing-it by Deirdre Bailey, I work at an innovative and creative institution. Perhaps it is because of the freedom we have to explore possibilities that we are often unaware of the depth to many of the simplest resources that are available. It is also without a doubt hard to be constantly adapting one's practice to ever-updating technology applications. As I continue to stumble upon features in google docs that make my job incredibly easier, I thought it might be valuable to share the simple features I have discovered and am so thankful for. For our most recent science lab data collection. ...which we linked to our google site and shared these with student groups who edited in their own colours, uploaded photos, and separated their qualitative data from their quantitative data by inserting additional sheets Qualitative Sample Quantitative Sample Students used the functions feature in google spreadsheets to verify their calculations: They were able to graph various data using the insert chart function

As The End Of Google Docs Draws Near, Google Asks Stragglers To Transition To Google Drive Google always pitched Google Drive, which launched in April after a considerable period of hype, as a replacement for Google Docs. What many users didn’t realize, it seems, is that Google will indeed completely replace Google Docs with Drive later this year. While Drive is still opt-in at this time, it looks like the forced transition is coming soon, as Google has started to alert users that their Google Docs account will soon be “upgraded to Google Drive.” What’s coming next, according to Google’s official transition documents, is an opt-out phase similar to what the company has done when it transitioned to the new Gmail interface recently. Judging from the messages that many users are now seeing in Google Docs, this phase is going to start soon. Finally, Google says, “users will be fully transitioned to Google Drive, with no ability to opt out.”