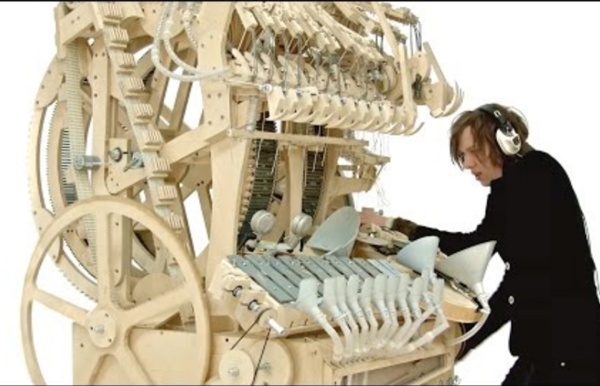 rollingstone William Seward Burroughs is not a talkative man. Once at a dinner he gazed down into a pair of stereo microphones trained to pick up his every munch and said, "I don't like talk and I don't like talkers. Like Ma Barker. You remember Ma Barker? DIY Pulley for the loungeroom stairs – Go Science Girls How we made our first DIY loungeroom pulley – and learning about physics and simple machines through play. We’ve been wanting to make a pulley for a while now. I’m not quite sure when exactly the fascination started, but it’s been going for a few months at least. Every time my daughter Jewel asked if we could make one, I couldn’t help but think “Yes, we should to get onto that. We’ll need to look up what to do, and make a trip to the hardware store to gather some supplies, including one of those fancy pulley wheel thingies.

Urban Furniture Smart Ideas for Smarter Cities Did you ever need a ramp for your luggage (or bike), or a shelter from a sudden downpour, or a place to sit down and tie your shoe? IBM believes that city life can be awfully inconvenient–and that cities should be designed with the needs of ordinary citizens in mind. Many brands talk about making their communications output useful, but they’re usually talking about apps or other digital or social programs. IBM has taken the idea of utility and applied it to the traditional outdoor ad.

Learning Through the Arts View the videos below and don't forget to download the viewer's guide for more information and support. Music Overview Boston Dynamics CEO Marc Raibert demos the Spot at Disrupt The audience at Disrupt got a surprise visit from Boston Dynamics’ Spot robot. While the company’s YouTube channel is quite popular, it’s even more impressive to see one of Boston Robotics’ robots in action. Boston Dynamics founder and CEO Marc Raibert got interviewed by TechCrunch’s Brian Heater. The two of them spent some time commenting on a video of the company’s various robots over the years, from the BigDog to the anthropomorphic Petman. The Spot in particular is optimized for home delivery. It looks like a dog, and it can climb stairs, open doors and more.

Snog Pure Frozen Yogurt, London Like this? Snog Pure Frozen Yogurt was founded in London, 2008 by Rob Baines and Pablo Uribe. They offer high quality frozen yogurt in well designed spaces with site specific light installations created by London based design studio, Cinimod Studio who were responsible for all of the permanent UK store’s designs, including all architectural and lighting design. With 7 locations now open, and a further dozen currently being rolled out across South America, Europe and the Middle East, Cinimod Studio relishes the challenge to keep pushing the store design as far as possible. Here's how playing a musical instrument can improve a child's brain We know that the complex colonies of microbes that live in our guts affect our physical health - imagine trying to digest things without them - but new research now suggests that they also have a positive influence on the way we think. Previous studies have revealed that in mice, changes in gut microbe colonies appear to ease feelings of anxiousness, and can help control the levels of cortisol - a potent stress hormone - coursing through the body. And now a new study on humans by researchers in the UK suggests a positive link between our gut microbes and our mental health. By feeding volunteers packages of gut-friendly prebiotics - non-digestible carbohydrates that act as food for ‘good bacteria’ called probiotics - the team was able to change the way they process emotional information, making it easier for them to ward off anxious or depressed feelings. This could be because the people who took the prebiotics were also found to have lower levels of cortisol in their saliva.

Sisyphus – The Kinetic Art Table by Bruce Shapiro Risks and challenges My experience building and installing large permanent Sisyphus istallations in museums around the world has taught me much about deadlines, budgets, working with others and above all, Murphy's law. The main risks are in underestimating costs and time to deliver a large number of high-quality pieces. The major factor here is quantity, which is hard to predict. We are trying to produce everything, except the electronics, in America. Our pricing reflects this, as we feel this is the best way to ensure our work is of the highest quality and on schedule.