Marco Tempest: The magic of truth and lies (and iPods) 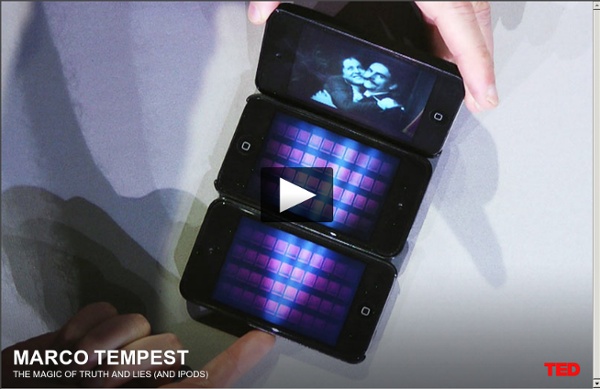 Top 6 Sites that Inspire and Educate If you’re a professional who likes to be intellectually stimulated and you enjoy keeping up with the latest news and breaking trends, the internet provides you with an endless choice of carefully curated sites to visit. Today, we bring you six of them that we believe are leaps and bounds above the rest. These sites will not only educate you on topics ranging from business and technology to art and design, they’ll motivate you to find your own, original ideas and see them through.

6 Socially Conscious Actions That Only Look Like They Help There are those who want to improve the world around us and who do so in intelligent, well-thought-out ways. Then there are those of us whose desire to help the environment is mostly based on being bored or shallow or wanting to fit in after we get lost in Whole Foods. Unfortunately, most of humanity is made up of the latter type. Also unfortunately, a lot of the half-assed stuff we do not only doesn't help but actually ends up making things worse for everyone.

Government 2.0 (August 16, 2011) Thanks to Todd Park, a federal agency has discovered that health care organizations can think more like nimble startups than like lumbering giants. (Illustration by Keith Negley) The great irony of the transformative health care reform legislation passed in 2010 is that although the law promises access to care for 30 million Americans, it relies on an outdated structure woefully ill prepared to serve them. Constrained resources, flawed economics, rising costs—how can a health care system under so much strain survive such an expansion? The answer will be found in creativity. Over time, the most dynamic health care institutions have boosted their creative metabolisms, so to speak, with promising methods for vetting new ideas and technologies.

Are You Ready for Mobile Learning? (EDUCAUSE Quarterly Are You Ready for Mobile Learning? Frequent use of mobile devices does not mean that students or instructors are ready for mobile learning and teaching By Joseph Rene Corbeil and Maria Elena Valdes-Corbeil Jason, a 19-year-old college freshman, woke up early Friday morning to download this week's U.S. History podcast to his iPod. 47 Mind-Blowing Psychology-Proven Facts You Should Know About Yourself I’ve decided to start a series called 100 Things You Should Know about People. As in: 100 things you should know if you are going to design an effective and persuasive website, web application or software application. Or maybe just 100 things that everyone should know about humans! The order that I’ll present these 100 things is going to be pretty random.

5 Terrible Situations for the Socially Awkward Man You probably know how to function in society. You know how to talk to new people, how to order food in restaurants, and you know exactly what time you're supposed to show up at parties. I'm here to let you know that there's an entirely separate class of people that doesn't know all of those things. Reinventing Health Care Services (August 16, 2011) A doctor describes his groundbreaking, transdisciplinary effort to design more cost-effective care models for conditions that drive a large proportion of US health spending. (Illustration by Keith Negley) My professional life has revolved around a single question: How can doctors and other health professionals catalyze big leaps in the quality and affordability of health care? In keeping with the Physician Charter, a modern version of the Hippocratic oath, many physicians are beginning to realize that they have an ethical imperative to promote “the wise and cost-effective management of limited clinical resources”—in addition to the health of patients. This ethical imperative has now become a fiscal imperative if the United States is to avoid what has been described in The New England Journal of Medicine as the “specter of financial Armageddon” for federal and state governments.

One Year or Less: Mobiles « 2011 Horizon Report Time-to-Adoption Horizon: One Year or Less According to a recent report from mobile manufacturer Ericsson, studies show that by 2015, 80% of people accessing the Internet will be doing so from mobile devices. Perhaps more important for education, Internetcapable mobile devices will outnumber computers within the next year. In Japan, over 75% of Internet users already use a mobile as their first choice for access. This shift in the means of connecting to the Internet is being enabled by the convergence of three trends: the growing number of Internet-capable mobile devices, increasingly flexible web content, and continued development of the networks that support connectivity.

This Awesome Urn Will Turn You into a Tree After You Die You don't find many designers working in the funeral business thinking about more creative ways for you to leave this world (and maybe they should be). However, the product designer Gerard Moline has combined the romantic notion of life after death with an eco solution to the dirty business of the actual, you know, transition. His Bios Urn is a biodegradable urn made from coconut shell, compacted peat and cellulose and inside it contains the seed of a tree. 6 Books Everyone (Including Your English Teacher) Got Wrong #3. Lewis Carroll's Alice's Adventures in Wonderland Anybody who grew up in the 1960s (and still remembers anything about it) can tell you what Lewis Carroll's classic children's book was really all about: A girl takes a "trip" down the rabbit hole and finds herself in a surreal world where animals start talking to her. After she eats some "mushrooms," everything starts to change sizes before her eyes.

Plasmonics intensifies a novel nanoscale light source, Stanford engineers find Mark Brongersma The EFISH device greatly increases the power of light passing through it. Not long after the development of the first laser in 1960, scientists discovered that shining a beam through certain crystals produced light of a different color; more specifically, it produced light of exactly twice the frequency of the original. The phenomenon was dubbed second harmonic generation. The Top Educational iPad Apps Every Teacher and Student should Know about ( 100+) When it comes to searching for educational apps to install on your iPad it feels like you get drowned in an avalanche of apps and resources from which you emerge empty-handed. Everyday new apps go viral and to keep up with the updates in this field is really a daunting challenge. Thankfully, there are many trusted educational resources ( this blog is one of them ) where educators and teachers can get to discover and learn about new useful apps to use in education. Another trusted resource is Langwitches whose images I am sharing with you below. Langwitches has done a great job in coming up with a list of great educational iPad apps organized into categories with different headings.

Project Avalon - Klaus Dona: The Hidden History of the Human Race Click here for the PDF version of this interview (20 pages) Click here for the video presentation March 2010 **Ed note: Some transcripts contain words or phrases that are inaudible or difficult to hear and are, therefore, designated in square brackets.** BILL RYAN (BR): This is Bill Ryan here from Project Camelot and Project Avalon.