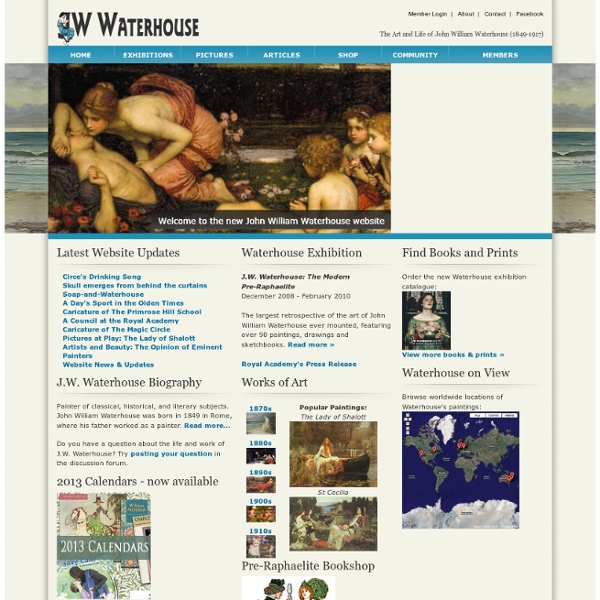 John William Waterhouse: Comprehensive Painting Gallery of Artwo Gustave Doré Art Images John William Waterhouse John William Waterhouse (born between January and April 1849; died 10 February 1917) was an English painter known for working in the Pre-Raphaelite style. He worked several decades after the breakup of the Pre-Raphaelite Brotherhood, which had seen its heyday in the mid-nineteenth century, leading him to have gained the moniker of "the modern Pre-Raphaelite".[1] Borrowing stylistic influences not only from the earlier Pre-Raphaelites but also from his contemporaries, the Impressionists,[1] his artworks were known for their depictions of women from both ancient Greek mythology and Arthurian legend. Born in Italy to English parents who were both painters, he later moved to London, where he enrolled in the Royal Academy of Art. He soon began exhibiting at their annual summer exhibitions, focusing on the creation of large canvas works depicting scenes from the daily life and mythology of ancient Greece. Biography[edit] Early life[edit] Waterhouse working on Lamia, circa 1908-09. Gallery[edit]

ART BY JANE WALKER: How to Make Glass Marbles--Introduction Click on image to see photos of a marble being made in "Make a Ribbon Core Marble". These instructions are free of charge for personal use only (see copyright below). PLEASE NOTE: I do not give lessons or demonstrations. I put together these instructions for making marbles using a Hot Head torch at the request of another marble-maker, Dee Snell. I want to point out that I am entirely self-taught, and some of my methods are the result of "figuring out a way to make it work" and may not be the methods used by other marble makers. I learned the basics of glass working from the book MAKING GLASS BEADS by Cindy Jenkins. The following instructions are my methods, requiring the tools I use, to make marbles with a Hot Head torch. Make a Ribbon Core Marble has images! These instructions may be copied free of charge for personal use only ~ The techniques and themes described in these instructions are not copyrighted or patented.

Helena Nelson Reed IKENAGA YASUNARI Artists Turn Their Palettes into Paintings for the Exhibition “Point of Origin” Denis Sarazhin After completing a series of miniature paintings two years ago, Dina Brodsky (previously) turned to her palette, experimenting with the tool of the series’ creation until it became a work of its own. During a studio visit with a friend she noticed he too had created a work on an old palette, however the work was far different than her own. This discovery led Brodsky to investigate other artists’ palettes and how they might manipulate them into works, inviting both friends and strangers to experiment with their palettes. “Everyone I asked made a phenomenal painting, and because they were sharing the images on social media, a few other artists asked if they could participate,” said Brodsky to Colossal. “It grew from there, almost like a conversation that was happening via palette paintings and social media amongst artists all over the globe.” James Adelman Alonsa Guevara Dina Brodsky in progress Christian Fagerlund Joshua Henderson Amber Lia-Kloppel Tim Lowly