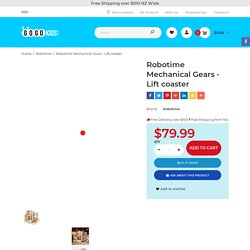 The interlocking mechanisms are pretty ingenious. Details are already cut and ready to assemble. The wood is beautiful and smooth. With Laser Cutting Technology, the pieces are easy to remove from the sheet of plywood, the laser cutting is precise and clean (no residue smoke burns). Assembled Size: 252*227*203mmPackage Size: 317*233*46mmWood Pieces: 219 pcs Ages 14+ We offer FREE delivery for all orders above $100.00 in New Zealand. We use Courier Post for all New Zealand deliveries.

Could a discarded shampoo bottle save thousands of babies lives? - BBC News. DIY Pulley for the loungeroom stairs – Go Science Girls. How we made our first DIY loungeroom pulley – and learning about physics and simple machines through play. 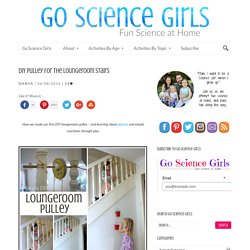 We’ve been wanting to make a pulley for a while now. I’m not quite sure when exactly the fascination started, but it’s been going for a few months at least. Every time my daughter Jewel asked if we could make one, I couldn’t help but think “Yes, we should to get onto that. We’ll need to look up what to do, and make a trip to the hardware store to gather some supplies, including one of those fancy pulley wheel thingies. But right now we have abc and xyz going on.

To be honest, I’d turned it into something that felt a bit daunting. I’m not necessarily afraid of daunting. But then I realised… it really doesn’t have to be that complicated. I realised that we don’t have to make the world’s best pulley on our first attempt. So anyway, that’s the back story behind our pulley design. And, wouldn’t you know, it actually works! Suitable for Try this for preschoolers and up. Hello Ruby. 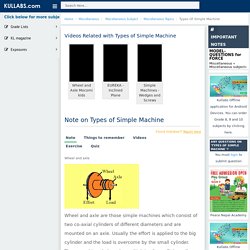 Usually the effort is applied to the big cylinder and the load is overcome by the small cylinder. These machines help us by multiplying force. String roller, madani, spanner, etc are some examples of it. In wheel and axle, we have: η = Inclined plane Slanted surface is called inclined plane. In inclined plane, we have: Screw A screw is defined as a simple machine having thread along its cylindrical surface. In screw, we have: Wedge The simple machine which is made up of two incline planes is called wedge. 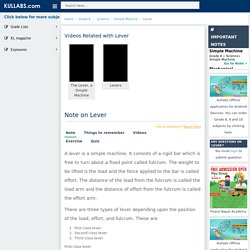