Delightful robots for children to program 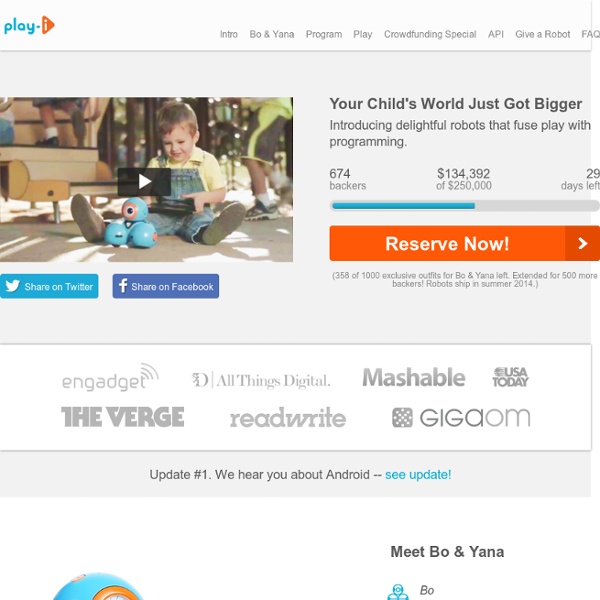 Dear Friends, We founded Play-i almost a year ago with one mission: to make programming fun and accessible for every child. It has been an exciting journey as Bo & Yana came to life, thanks to the input and help from hundreds of children and parents who played with our robots at different stages of development. We truly believe that Bo & Yana make a child's world bigger. We have been touched by your support in helping us meet, and exceed, our goal. Thanks for believing in us, and we are now working hard on getting Bo & Yana to you!

Dino Pet – BioPop The lifespan of the dinoflagellates will vary based on their exposure to sunshine, external temperature and how quickly they require new nutrients to be supplemented. Typically, a Dino Pet will live for approximately 1 month to 3 months on nothing but a little indirect sunlight. If you want to extend the life of your pet, simply add a little bit of BioPop Dino Food to the mix and you can extend their life, forever… Seriously, by regularly adding Dino Food, the dinos can potentially reproduce indefinitely.

How Fiverr.com is changing the creative economy $5 at a time Fiverr.com co-founder Micha Kaufman The website Fiverr poses two immediate questions for its community of users: What would you do for $5 and what would you pay someone else to do for $5? And with a rapidly growing base of 600,000 service gigs, the answers to both appear nearly limitless. "When we looked at what was out there, we realized that there were options for people that were willing to work for as little as one cent," Fiverr co-founder Micha Kaufman told Yahoo News in a phone interview from Israel. "Or if you are a very professional freelancer, you probably have some options. But in between, there is a huge gap."

S. Korean firm unveils robot playmate for kids South Korean telecoms operator KT on Wednesday rolled out a robot playmate for children in a move aimed at cashing in on the potentially lucrative industry. A child plays with a robot playmate entitled "Kibot" which has a monkey face and a display panel on its body during its launching event in Seoul. Parents can remotely control the robot by mobile phone and monitor children via a camera embedded in Kibot. The MaKey MaKey might change the game By Trevor ShawRead more by Contributor October 8th, 2014 A new tool opens up a variety of creative possibilities for students Tell me if this sounds familiar… You want to increase student buy-in on a project by designing a challenge with a connection to the “real world.”

Bilingualism in Young Children: Separating Fact from Fiction By Lauren Lowry Hanen Certified Speech-Language Pathologist Note: “bilingual” refers to someone who speaks two languages; “monolingual” refers to someone who speaks one language The Facts: What We Know About Bilingualism Our world is becoming increasingly multilingual.

Top 40 Platforms for Crowdfunding Social Change This post is a guest blog by Josef Davies-Coates and it originally appeared on the P2P Foundation blog. Crowdfunding is a new word for an old idea. The Oxford English dictionary defines it as “the practice of funding a project or venture by raising many small amounts of money from a large number of people, typically via the Internet”. Crowdfunding’s poster child, Kickstarter, launched in April 2009. It wasn’t the first online crowdfunding platform (ArtistShare launched in 2003), but it was the first to become widely known and scale. Robot Toys, Robot Kits, Lego, Knex, and Toy Robots Soda Can Robot Explore the world of robotic science with the Soda Can Robug science kit from Green Science. Kids age 8 and up can recycle a soda can and turn it into a working robotic bug.

LEGO Robotics - Applying STEM in the Classroom Halliburton and the Texas Tech University T-STEM Center in collaboration with the Whitacre College of Engineering, Electrical and Computer Engineering Department provided the opportunity for teachers to participate in a project-based learning curriculum centered on the 2012 Get Excited About Robotics (GEAR) competition challenge. During this five-day workshop, teachers began to build a solid foundation for moving robotics into more mainstreamed science, technology, engineering and mathematics curriculums. This website includes the curriculum used during the teacher workshop as well as serves as a basis for teachers to create their own LEGO Robotics programs. Throughout this curriculum, students investigate the components of LEGO robotics: LEGO Mindstorms NXT brick, LEGO Mindstorms Education software, design journaling, robot construction, programming and problem solving.

Finland’s Formula for School Success (Education Everywhere Series) Pasi: If you look at the 15-year-olds, or 16-year-old Finns who are leaving the basic school, most of them have been in special education throughout their schooling. Which means that special education is actually nothing special. So it's you are a special child or student if you haven't been, if you haven't ever used special services. The 4 fatal flaws of failed Kickstarter campaigns Crowdfunding is having monumental impacts upon all across all areas of entrepreneurship. Founders who would once require tens if not hundreds of thousands of dollars in seed rounds or bank financing are skipping altogether the cumbersome and costly route of equity and debt based funding and instead coming to Kickstarter. This is changing the face of business as we know it. With just Kickstarter campaigns raising over $112 million in the first quarter of 2014 and $144 million in the second quarter; it’s clear crowdfunding is becoming a prolific player in the power struggle for startup growth. But launching a crowdfunding campaign is no guarantee of success. I want to focus on the common failure points for Kickstarter campaigns, examine why promising startups fail and learn how to avoid these hurdles all together.

Flow and Adolescence The flow experience is a state of complete involvement in an activity that requires complete concentration (Csikszentmihalyi, 1999). Flow is characterised by the matching of high environmental challenges with equally high levels of personal skills, the merging of action and awareness, the loss of reflexive self-consciousness, a sense of control and a distortion of temporal experiences (Nakamura & Csikszentmihalyi, 2005). Activities that produce flow experiences are intrinsically motivating and as a result they are valuable in that they produce a state of being that is an end to itself. Furthermore they are also hypothesised to allow an individual to flourish and function at their best (Larson, 1988). Due to the rewarding nature of flow experiences, the activities that result in flow tend to be preferentially replicated (Csikszentmihalyi & Massimini, 1985) which impacts upon an individual’s life theme. References and Further Reading

3 Internet of Things Security Nuances You May Not Have Considered Over the past 18 months, I’ve been in a variety of situations where I had the opportunity to discuss the Internet of Things (IoT) with various industry professionals, developers and journalists. It intrigued me to realize that many of my viewpoints often differed from others discussing the topic in articles or event presentations. With that in mind, I wanted to share three topics that I find are discussed less frequently. Regardless, these topics should be an important aspect of the conversations we need to be having on this rapidly growing subject.