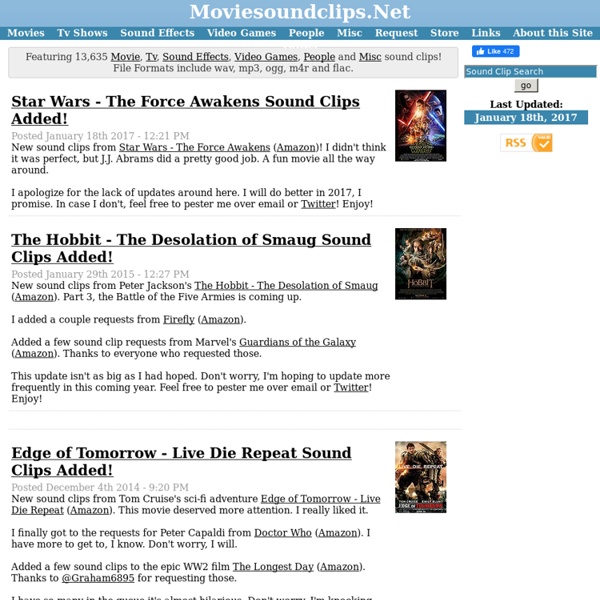 Movie Sounds Central - Movie Wavs Sounds Movie Quotes Sound Clips Free Sound Clips | SoundBible.com 500 Storyboard Tutorials & Resources Once the script is written – how do you effective communicate the visual direction of your film? The answer is storyboards – essentially a scene-by-scene visual guide to the screenplay of the film. Storyboards are a vital part of the pre-visualization process, as well as being an important tool for preproduction and on the set. Developed in the 1930s by Walt Disney company for their animated cartoons, they grew in popularity during the early 40s. Here are over 500 storyboarding tutorials, resources and tools to help you better communicate your vision. Celtx Celtx is the world’s first all-in-one media pre-production system. 110 Celtx Tutorials FrameForge 3D The software creates virtual cameras, actors and objects in photo-accurate 3D scaled sets for previsualization. Toon Boom: Storyboard Pro This software is used to create storyboards. PowerProduction: StoryBoard Artist Productivity merged with creativity. PowerProduction: StoryBoard Quick

The Art of Storyboarding with Ridley Scott, Sam Mendes, and Conrad L. Hall Previsualization and storyboarding will vary production to production, but it's important to have some sort of idea about what you're shooting before you shoot it. Often there are stories about famous directors coming on set and making it up as they go along, but this isn't the most ideal way to work, especially when your budget can't afford 50 crew members to move set pieces and lights to compensate for your on-the-fly planning. Below are two videos, the first is a conversation with Ridley Scott about his own storyboarding work, and the second is a commentary with Sam Mendes and the late Conrad L. Hall comparing storyboards versus screenshots of American Beauty. Ridley Scott on Storyboarding: The next one is a bit long, but it's absolutely fascinating to see masters of their craft talk about the storyboards and final shots. Sam Mendes and Conrad L. [via Filmmaker IQ]

Free Sample Packs The Hacker Playbook 2: Practical Guide To Penetration Testing - pdf - Free IT eBooks Download Book Description: Just as a professional athlete doesn’t show up without a solid game plan, ethical hackers, IT professionals, and security researchers should not be unprepared, either. The Hacker Playbook provides them their own game plans. Written by a longtime security professional and CEO of Secure Planet, LLC, this step-by-step guide to the “game” of penetration hacking features hands-on examples and helpful advice from the top of the field. Through a series of football-style “plays,” this straightforward guide gets to the root of many of the roadblocks people may face while penetration testing—including attacking different types of networks, pivoting through security controls, privilege escalation, and evading antivirus software. From “Pregame” research to “The Drive” and “The Lateral Pass,” the practical plays listed can be read in order or referenced as needed.

Markus Hakala's Kicks All In One: 500 Free Kicks In Total! Hi guys, Thanks for the feedback. The kicks are made on scratch. And when I am saying that they are made on scratch, I mean they are synthesized. Simple sine wave, which is pitched to some key. And the last, there is huge amount of FX prosessing, testing, tuning, testing, tuning and even more trial and error. And about my gear? Of course, the FL Studio is heart of my “studio”. But seriously, my kicks are made fully on software based processing, and there is nothing special or “risky” about them. Sorry for my bad english!