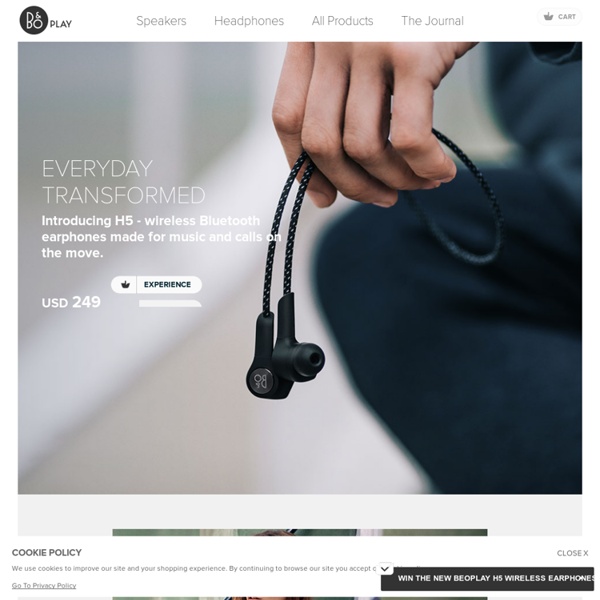 BeoPlay A9 Black EditionBack by popular demand H3 € 199 H3 in a bold black Powerful and authentic sound experience from robust yet ultra-light in-ears. Add to cart FORM 2i € 129 The design classic – now featuring mic and remote Ultra-light on-ear headphone with an impressive and honest stereo sound – and an improved comfort design that ensures a comfortable listening experience. Add to cart A8 € 1.149 Classic design with a modern twist Stunning one-piece stereo that makes your music look and sound beautiful.

Audio Interface Buying Guide How to Choose an Audio Interface Choosing the right audio interface may seem a little overwhelming. There are all kinds of different input and output configurations, connection types, formats and many other options to consider. So, how do you find the right one for you? Der erste Lernstift, der vibriert, wenn man sich verschreibt! Exchangeable writing tips: pencil, fountain pen, ballpoint With its exhangeable writing system the pen can be easily turned into a pencil, fountain pen or ballpoint. Color variants for girls and boys, mothers and fathers Boys will be boys and most girls do have a feminine style most of the time; that's why Lernstift will be available in respective colors.

zu: Zu Audio Speakers The Neoteric Listener... Zu Audio's Soul Superfly Loudspeakers by Dean Seislove Standing on the harbor dock, taking in the wreckage of an unbroken film of dead sardines is one of those lessons in perspective that, to quote rock icon, David St. Hubbins, is "Too much, there's too much [effing] perspective now." Hammered by stormy ocean waters, a few million sardines broke one way to a safe ocean channel while another group swam to what appeared to be a tranquil harbor basin, only to use up all the oxygen and die. Was it fate, or bad decision making?

Charge All Your Devices With a Solar-Powered Bonsai Tree - Hot Penguin If you’ve got a lot of gadgets–and who doesn’t these days?–you know that it can be difficult to keep track of all of their different chargers, not to mention hard to find outlet space to plug them in. One stylish former Kickstarter project aims to solve that problem while also beautifying your space. The electree+ is billed as “part sculpture, part appliance” because it mixes form and function, offering a practical product–a multi-unit solar charger–with a beautiful form. The product was inspired by bonsai trees and nature’s fractal patterns, with 27 square silicon solar panels on each tree and a 14,000mAh internal battery that stores enough power to recharge an iPhone nine times or an iPad2 twice. Power is provided through two USB ports and a Qi wireless charging zone that works with most smart phones and can be adapted to work with iPhones.

Our projects · Dogstudio That rug really tied the room together The Big Lebowski ( 1998 ) Dragone View project Waterloo View project Why Your MP3s Sound Bad: High-Resolution Audio Explained Neil Young made waves this week with some comments about digital music files—first at the Sundance Film Festival, and then later in an All Things D interview. But lost in the media frenzy is his real point. Young wasn't putting down all digital music. Instead, he was referring specifically to the compressed MP3 and AAC files most people listen to today. Truth is, they just don't sound all that good.

CES Roundup: 16 Cool Gadgets from Sunday at the Vegas Tech Show It’s tough to numerically pinpoint which days of CES are which. If you’re in the tech media, Monday’s really the first full day of CES, but you show up on Sunday (or earlier) because there are a few things on Sunday; if you’re a tradesperson, Tuesday’s really the first full day of CES. Actually, Tuesday is the first official day of CES, seeing that the show this year runs from January 7 to January 10. January 7 is the first day the show floor is open. Which Wireless Speaker System Should You Buy? click to enlarge The Beats Pill may be your most obvious choice for a wireless speaker, but it probably isn't the best. If you've had even a cursory glance at the year's big pop music videos -- Miley Cyrus' "We Can't Stop" or Robin Thicke's "Blurred Lines," for instance -- you may have noticed the unabashed placement of one specific product: Beats Pill from Beats by Dr. Dre. It's tough to miss this rechargeable speaker, a device that allows you to stream music from any computer or smartphone with Bluetooth baked in (which is almost all of them at this point).

Yamaha RX-A730 Network AV Receiver Audio PerformanceVideo PerformanceFeaturesErgonomicsValue AT A GLANCEPlus Audiophile sound quality Outstanding build quality Successful YPAO room correction Minus Pedestrian power output Suboptimal video processing Crowded, hard-to-use remote THE VERDICT A $700 receiver that puts the audio first. The AVR is the Grand Central Station of our home entertainment systems. Everything runs into one box from our source components and then out to our speakers and displays for audio and video. In the process, we hope the video signal moves through the AVR without being harmed and that the amplifiers in the receiver mate well with our speakers, providing them plenty of juice without any distortion or clipping.