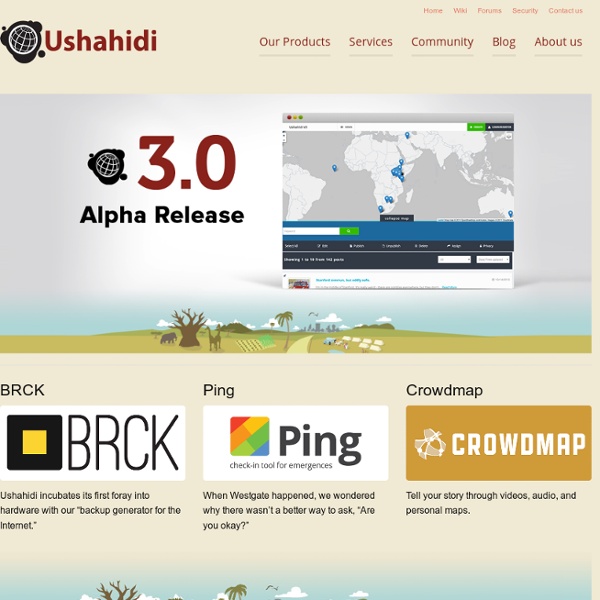 Turn Your iPhone into a Wi-Fi Hotspot Feel like hacking your phone today? If you've got about 10 minutes to spare, you can turn your iPhone into a Wi-Fi hotspot using a combination of the latest "jailbreaking" software and an app called MyWi. The app takes your iPhone's 3G data connection and shares it out so other computers can connect to it as if it's just another Wi-Fi network. You can even share your 3G connection with your iPad, if you'd like. Before You Get Started... Tools - Cool Infographics Adioma creates information graphics out of your textual data, using timelines, grids and icons. Create impressive charts from spreadsheets. Assemble into dashboards, embed in websites, or simply share a link. A Python interactive visualization library that targets modern web browsers for presentation Cacoo is a free online drawing tool that allows you to create a variety of diagrams such as site map, flowchart, mind map, wire frame, UML diagram and network diagram. Crowdsourced Analytics Solution Marketplace - Make Sense of Big Data Free interactive charts created online in seconds ChartGo is an online graph maker tool.

Light Touch projector makes any surface a touchscreen A previously little-known company from the UK called Light Blue Optics has demoed a projector at CES which allows users to interact with the light image as if it were a touchscreen. The Light Touch throws a 10-inch image at WVGA resolution at incredibly short distances thanks to the holographic projection technology involved. At the same time the infra-red touch sensitive system allows users to interact with social networks, multimedia sharing and any other applications that can use the Wi-Fi or Bluetooth support in the device to connect to the Internet. It comes with 2GB of onboard flash memory, a microSD card slot for expanding the storage and the battery life will last 2 hours.

Educational Discourse Recently I’ve been discussing with a number of educators different tools that teachers can use with students or on their own for learning, sharing, and collaboration. There are many websites that do a tremendous job of exploring different tools that teachers can access like TeachThought, freetech4teachers , edutopia, edudemics and many more. There are also many educators that have great resources for specific apps/tools like Evernote and EduClipper where you can get great information about how to use these tools in the classroom. With that being the case, I don’t usually write about tools too much. However, I have been using a specific tool for curating items from the web for a number of years now and thought it would be worth sharing.

A Useful Data Set on Political Violence that Almost No One Is Using For the past 10 years, the CIA has overtly funded the production of a publicly available data set on certain atrocities around the world that now covers the period from January 1995 to early 2014 and is still updated on a regular basis. If you work in a relevant field but didn’t know that, you’re not alone. The data set in question is the Political Instability Task Force’s Worldwide Atrocities Dataset, which records information from several international press sources about situations in which five or more civilians are deliberately killed in the context of some wider political conflict. Each record includes information about who did what to whom, where, and when, along with a brief text description of the event, a citation for the source article(s), and, where relevant, comments from the coder. The data are updated monthly, although those updates are posted on a four-month lag (e.g., data from January become available in May).

Google Maps API v3 Adds KML, Traffic, and Bike Routes Developers working with Google’s next generation of its popular mapping API (our Google Maps API Profile) will be pleased to learn that some new features have been added to the API. Since its initial release a little less than a year ago, v3 of the Google Maps API has steadily been growing in terms of new features like driving directions and new functionality access to elevation data. The latest addition of features are three new “layer classes” that make it dead simple to add KML (or GeoRSS), traffic, or bike routes as overlays on a Google Map. Thor Mitchell writes about the release of these new layer classes on the Google Geo Developer Blog:

cagnotte cadeau, cagnotte anniversaire, cagnotte en ligne Create a money pot (for free) Share your money pot and collect contributions Ask your friends to contribute and keep track of your money pot with your computer, smartphone or tablet. Buy exactly what you want Give the money directly to the lucky recipient and let them decide how to spend it. How can I schedule an event using online tools? When you are planning a meeting, conference call, training session, etc, one of the first things you might need to ask is: “What is the most suitable time and date to schedule this event?” Organizing an event with colleagues located in the same time zone is usually quite straightforward because you can check their availability and schedule the event by using the tools at your disposal, such as Microsoft Outlook. Things get a bit more complicated when you need to schedule an event with people located in different time zones. You might not know if they are available, unless you write to them and start what can turn into a long and inefficient email discussion. This can be due to several reasons, including the use of different and/or out-of-date calendar systems.

What is Web 2.0? Ideas, technologies and implications for education (TechWatch report) Within 15 years the Web has grown from a group work tool for scientists at CERN into a global information space with more than a billion users. Currently, it is both returning to its roots as a read/write tool and also entering a new, more social and participatory phase. These trends have led to a feeling that the Web is entering a ‘second phase’—a new, ‘improved’ Web version 2.0. But how justified is this perception? Executive summary This TechWatch report was commissioned to investigate the substance behind the hyperbole surrounding ‘Web 2.0’ and to report on the implications this may have for the UK Higher and Further Education sector, with a special focus on collection and preservation activities within libraries.