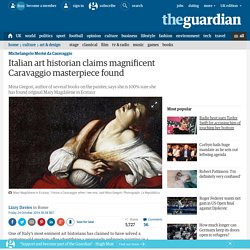 Mina Gregori, 90, president of the Roberto Longhi foundation of art history studies in Florence and author of several books on the baroque painter, said she was 100% sure she had found the original Mary Magdalene in Ecstasy. Who was the Marquis de Sade really? Abusing the Marquis de Sade. Edgar Degas “Scène de guerre au Moyen-âge” (1865), 83.5 x 148.5 cm Musée d’Orsay, Paris (image © RMN-Grand Palais, Musée d’Orsay / Gérard Blot) PARIS — Georges Bataille, in The Accursed Share, said that if the Marquis de Sade had not existed, he would have had to been invented. 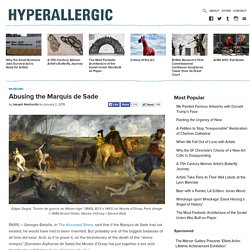 But probably one of the biggest badasses of all time did exist. Bernini: He Had the Touch by Ingrid D. Rowland. Portraits of the Soul an exhibition at the Museo Nacional del Prado, Madrid, November 6, 2014–February 8, 2015 Bernini: Roma y la Monarquía Hispánica [Bernini: Rome and the Spanish Monarchy] 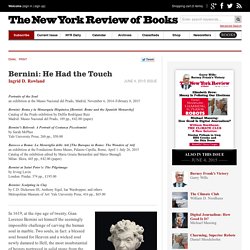 The Straw Manikin — Francisco Goya. Women Murdering Men In Western Art History. One of the greatest aspects of ancient Greek civilization was the persistent belief that there was nothing women liked better to do than assemble a gang, air their tits out, and roam the countryside beating men to death. 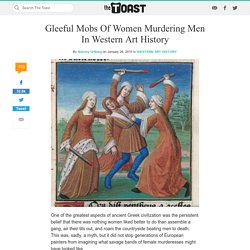 This was, sadly, a myth, but it did not stop generations of European painters from imagining what savage bands of female murderesses might have looked like. Rediscovering the Music of the Age of Caravaggio. Caravaggio (Michelangelo Merisi), “The Musicians” (1595), oil on canvas, 36 1/4 x 46 5/8 in. 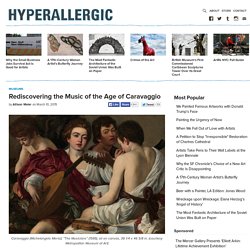 (courtesy Metropolitan Museum of Art) The aural history of the 16th to 17th century resonates through the Metropolitan Museum of Art’s Painting Music in the Age of Caravaggio. Lutes, a plague-surviving violin maker, and songbird charming flutes join three paintings that depict the musical instruments, one by Caravaggio and the others by contemporaries Valentin de Boulogne and Laurent de La Hyre. A Gigantic 3D-Printed Zoetrope Based on Ruben's Gruesome Painting, 'Massacre of the Innocents' British artist Mat Collishaw (previously) has built a huge 3D-printed zeotrope called All Things Fall. 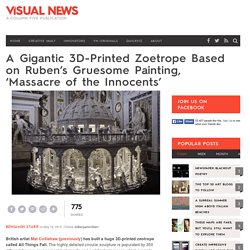 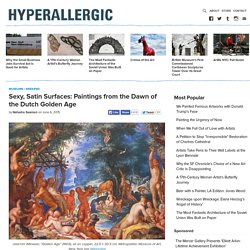 Metropolitan Museum of Art, New York (via Wikipedia) 52 Times Western Art History Was Hella Body Positive (NSFW) Rape Scenes Aren't Just Awful. They're Lazy Writing. By now it’s almost a ritual: A movie or TV show—probably Game of Thrones—depicts a woman getting raped, is greeted by furious criticism on the Internet, which slowly dies down until the next rape, when the cycle begins anew. 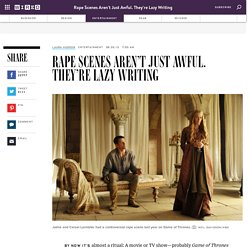 Over the last several decades, rape has evolved from a topic that was neither depicted in pop culture nor talked about publicly, to a frequent, even overused plot point in movies and TV shows. It’s also become the center of a fierce debate about when portraying rape in fiction is unnecessary, manipulative, and even harmful—especially when it feeds into real-life misconceptions about sexual assault that are often used to deprive rape survivors of legitimacy or justice.

Half the time, people can’t even seem to figure out how to define rape, let alone portray it in responsible ways. From reinforcing falsehoods about sexual violence to the objectification of women, here’s why that rape storyline is probably a bad idea, and a pretty uncreative one too. Rape Is Rape. Judith and Her Maidservant — Artemisia Gentileschi.

The Judith massacre: hang ye up this head upon our walls. In my last post we saw how God helped Judith cut off the head of Holofernes. 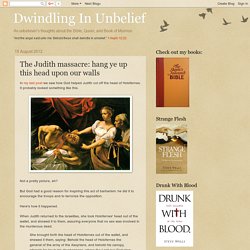 It probably looked something like this. Not a pretty picture, eh? Goya Was Right.

Something borrowed something new

When Women Wanted Sex Much More Than Men. In the 1600s, a man named James Mattock was expelled from the First Church of Boston. 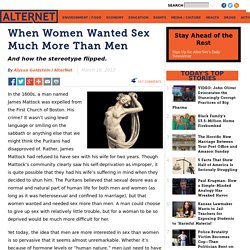 His crime? It wasn’t using lewd language or smiling on the sabbath or anything else that we might think the Puritans had disapproved of. Rather, James Mattock had refused to have sex with his wife for two years. Though Mattock’s community clearly saw his self-deprivation as improper, it is quite possible that they had his wife’s suffering in mind when they decided to shun him. The Puritans believed that sexual desire was a normal and natural part of human life for both men and women (as long as it was heterosexual and confined to marriage), but that women wanted and needed sex more than men. Yet today, the idea that men are more interested in sex than women is so pervasive that it seems almost unremarkable.

The idea that men are naturally more interested in sex than women is ubiquitous that it’s difficult to imagine that people ever believed differently. Yet the times were clearly changing. The First Sex Manual Published in North America, 1766. The first sex education text printed in North America may have come with a fake pedigree, but it went on to distinction as the go-to for thousands of sexually curious young people. Peter Paul Rubens, The Rape of the Daughtersof Leucippus. Body Deleuze Foucault.