Churches face corruption charges. Kohima, Feb. 13: There has been a cry for reformation in Naga churches as corruption has gradually crept into them. 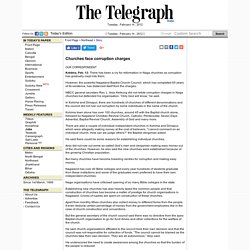 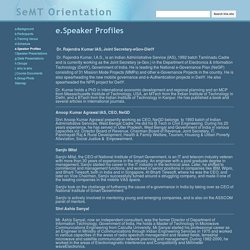 Nagaland becomes a state in constant limbo, unsure of its past, confused about its destiny : Special Report - India Today 31071989. Twenty-five years ago the Naga hills district in Assam was granted statehood. 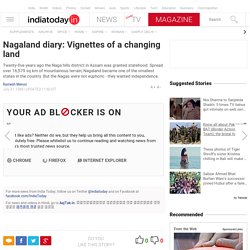 Spread over 16,579 sq km of mountainous terrain, Nagaland became one of the smallest states in the country. But the Nagas were not euphoric - they wanted independence. A day before India was declared an independent nation, a group of Naga leaders led by Zapu Phizo declared Nagaland independent. Phizo set up a parallel government and called for an armed struggle. With Kohima having been a battlefield during World War II there was no shortage of arms as the retreating army had left behind enough ammunition. A few decades ago, headhunting was an important ritual among the Konyak tribes but today with rapid westernisation, jeans and western music have become the new symbols. Nikita Narendra Pandya. SEPARATISM IN NORTH EAST INDIA: ROLE OF RELIGION LANGUAGE AND SCRIPT - Dr. Kunal Ghosh. 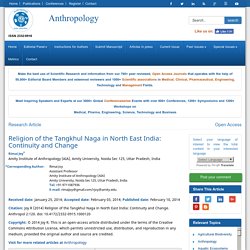 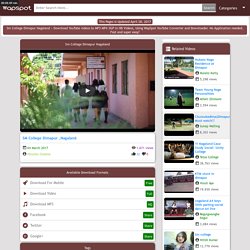 Untitled. Dubious rol. SEPARATISM IN NORTH EAST INDIA: ROLE OF RELIGION LANGUAGE AND SCRIPT - Dr. Kunal Ghosh. G Spot Healing - Releasing Sexual Trauma. One of the great mysteries of female ejaculation is why some women can do it – and some can’t… And even when they’re doing everything that experts say is “necessary” for a woman to squirt, they still can’t do it.

But maybe this isn’t such a mystery after all! You see, the G spot seems to be a point where sexual and emotional wounding is held in the body. If you haven’t heard of the idea of cellular memory before, look at it this way: every unexpressed emotional trauma has energy behind it – and if it’s not verbalized or given expression in some other way, it goes into the body. Even the smallest emotional wound, I believe, is held in the body – perhaps as a little bit of tension in muscle fibers, or a slight disturbance to the metabolism of the tissues. Rani Gaidinliu - the revolutionary, the revivalist and the reformist - News Bharati.

- Jagdamba Mall Introduction In the whole of Northeast region, though far away from the mainland of the country and inaccessible during olden days, there was a spontaneous revolt in most of the janjati communities of this region against British rule and the leaders of such revolutionary movements were spiritual leaders, religionists, revivalists, and reformists as well. 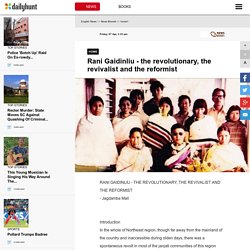 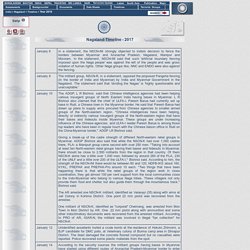 L R Bishnoi also claimed that the chief of ULFA-I, Paresh Barua had currently set up base in Ruili, a Chinese town in the Myanmar border. He said that Paresh Barua had drawn up plans to supply arms procured from Chinese agencies to smaller armed groups of the North-eastern region. "Chinese intelligences have been helping, directly or indirectly various insurgent groups of the North-eastern region that have their bases and hideouts inside Myanmar. AMERICA FUNDS CHRISTIAN TERRORISTS IN INDIA. Dwp 157 modem not working in windows 10? Answers for this question: First, make sure the drivers of your network adapter or wifi adapter is properly installed and updated to the latest version. 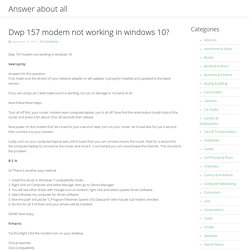 If you are using Lan Cable make sure it is working, no cut, no damage or no bend at all.. Now follow these steps.. Turn all off first, your router, modem even computer/laptop, turn it all off. Now find the reset button (small hole) of the router and press it for about 10 to 20 seconds then release. Now power on the modem first, let it load for just a second. Lastly, turn on your computer/laptop wait until it loads then you can connect now to the router.

Special Schemes - Air India. You are visiting a travel partner of www.airindia.in. 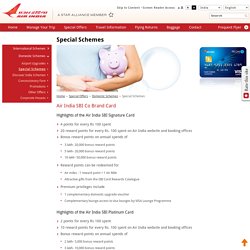 This website is owned and operated by a third party and not under the control of Air India. You will be entering an agreement directly with our partner. All further communication shall be directed to the email address and/or phone number provided by our partner. SEPS Project – Biomass Gasification in Nepal - WISIONS of Sustainability. WINROCK International is implementing this project to pilot biomass gasification for rural electrification by installing an 11 kW gasification unit. The use of at least 500 litres of kerosene and 1000 litres of diesel will be avoided annually by the installation of the new technology, resulting in enhanced livelihoods and energy for lighting and other productive end-use applications. As of June 2015, the transmission and distribution systems, including a power house accommodating the gasification system, have been successfully installed. On-site operators and managers have received intensive training on how to use and maintain the facilities.

However, a few adjustments had to be made to the scheduled project implementation. Index. Solar steam energy is approaching us very fast as blessing for distributed generation. There is bright scope of establishing 15 million solar thermal power plants up to 10 kw capacity in India. Liberalization of power generation has opened vast oportunities for small generation capacities in villages. Such tiny power plants will have the following eye catching advantages:- (1) Solar power plant will use parabolic reflectors and steam engine which is simple technology. Technical Services To Connect The Unconnected. Technical Services To Connect The Unconnected. The Doppelmayr family. Rahul Gandhi Version 2 : 5 Facts and Changes You Need to Know. So Rahul Gandhi is a changed man now. What's the difference between an EOI, RFP, RFT and RFQ? What’s the difference between an EOI, RFP, RFT and RFQ? If you’re confused by the plethora of terms around bid management, tender consulting, proposals and the equally confusing list of acronyms related to procurement you’re not alone.

The various acronyms used in the procurement process has a lot to do around the buyer’s readiness to purchase. For example, an EOI (Expression of Interest) – often done in the early stages of the procurement process – may be released if the buyer is just looking, or is seeking industry input into scoping requirements that will then go back out to market later on. An RFP (Request for Proposal) is often the next stage where the buyer goes to market for solutions-oriented approaches to service or product delivery. For simplicity I have summarised the key differences below: What could be possible solution for Nagaland problem & its development? - Quora. Untitled. Selection of Projects: The selection of the projects will be largely through a fully open competitive mode. The priority strategic areas identified through wide deliberations and discussions or those needing urgent solutions may however, also be addressed under this Fund if need be, in a sponsored mode or a combination of sponsored and competitive modes.

KARNATAKA ICT GROUP-KIG-2020. Rural BPO. Karnataka State, during the last decade, has emerged as the front-runner in IT / BPO / ITESsectors. Bangalore is the acknowledged leader in the global IT space. Welcome to Dr.Reddy's Foundation. Rural BPO. Spoken Web - IBM. Spoken Web (a.k.a World Wide Telecom Web or Telecom Web) is a technology to enable the illiterate and the underprivileged with the power of information by using mobile phones (since its well known that mobile phone penetration is much more than computer/internet penetration in developing countries and ~70% of the people of the world don't/can't access internet). Mastek: Contact Us. UTIITSL India: Financial & IT Service Provider, PAN Card Issuer. Software Company Chittoor. ‘Smart Village’ programme from on Jan. 5, says Naidu.