What Makes Caravaggio's The Taking of Christ a Timeless, Great Painting? Michelangelo Merisi da Caravaggio had many followers. 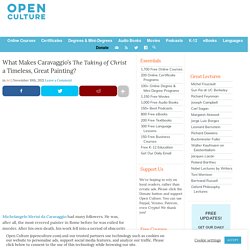 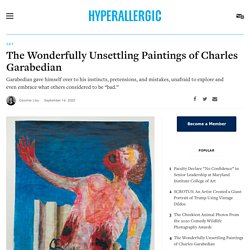 I’ve never imagined Prometheus surrounded by his own shit, for example, terrified and in unbearable agony from having his liver torn out on a daily basis. But Garabedian did, and did so with such inventive detail and visceral humor that he transports the classical to the present day, here. After hundreds of years of art history fetishizing classical aesthetics, Garabedian’s paintings remind the viewer that the world of Olympic gods and titans is one that is not perfect — instead, it is idyllic and savage and surreal all at once.

Charles Garabedian: Outside the Gates, an online exhibition jointly organized by L.A. The unrelenting vision of Lucian Freud. Sometimes when a painting was nearing completion, Freud would step back from the canvas and “as though taunting himself” would murmur “How far can you go?” 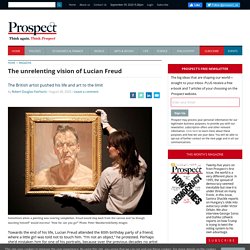 Photo: Peter Macdiarmid/Getty Images Towards the end of his life, Lucian Freud attended the 80th birthday party of a friend, where a little girl was told not to touch him. Edvard Munch: booze, bullets and breakdowns. Hidden away in the basement of Oslo’s Munch Museum lies a treasure trove. 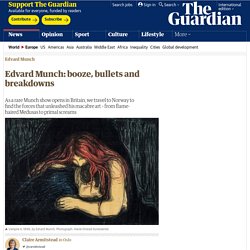 Here you’ll find madonnas and vampires, lions and tigers alongside the hefty white blocks from which they were printed, still blackened with printers’ ink. It feels like being conducted around the inside of Edvard Munch’s brain. You might also spot, resting on an easel, a stunning early colour version of The Scream, scribbled with a rough urgency in pastel on cardboard, and therefore too fragile to be subjected to daylight. The Lurchingly Uneven Portraits of Paul Cézanne. It's OK to Feel Ambivalent About Michelle Obama's Official Portrait. Critics on Obamas’ Official Portraits by Kehinde Wiley, Amy Sherald. Portrait of Michelle Obama by Amy Sherald and portrait of Barack Obama by Kehinde Wiley. 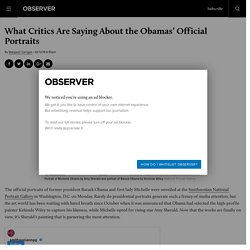 National Portrait Gallery The official portraits of former president Barack Obama and first lady Michelle were unveiled at the Smithsonian National Portrait Gallery in Washington, D.C. on Monday. Rarely do presidential portraits generate such a frenzy of media attention, but the art world has been waiting with bated breath since October when it was announced that Obama had selected the high-profile painter Kehinde Wiley to capture his likeness, while Michelle opted for rising star Amy Sherald. George W. Bush’s Painted Atonements. George W. 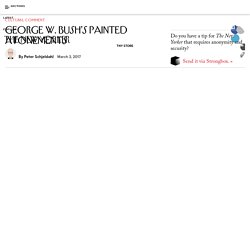 Bush looms small in memory. The Presidency fit him like grownup clothes on a toddler. He made, or haplessly fronted for, some execrable decisions, but hating him took conscious effort. Nothing is Hidden - September 24, 2014. Nothing is HiddenIn David Lynch's new exhibition at the Pennsylvania Academy of the Fine Arts, the mundane and macabre come together. 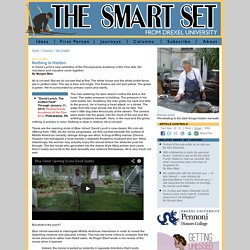 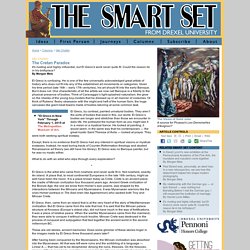 Could the reason lie in his birthplace? El Greco is confusing. He is one of the few universally acknowledged great artists of history who does not fit into any of the established art movements or categories. Given his time period (late 16th – early 17th centuries), his art should fit into the early Baroque. But it does not. El Greco, by contrast, painted unnatural bodies. Except, there is no evidence that El Greco had any interest in spiritual visions or mystical ecstasies. What to do with an artist who slips through every explanation? The Minor Miracle of John le Carré’s ‘A Most Wanted Man’ «

My favorite line from any John le Carré novel (at the moment, at least; it changes all the time) is from Little Drummer Girl: “Somewhere in every bomb explosion there is a miracle.” 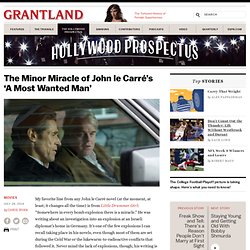 The Reviews Are in For Bush’s Paintings. On Friday, the George W. 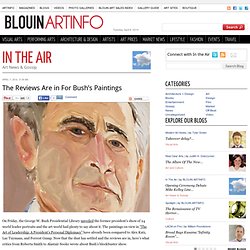 Bush Presidential Library unveiled the former president’s show of 24 world leader portraits and the art world had plenty to say about it. Portrait of a failed president: Inside the art of George W. Bush. Former President George W. Bush’s first public art exhibit, “The Art of Leadership: A President’s Personal Diplomacy,” opened at his presidential library in Dallas on Saturday. The left largely greeted his never-before-seen portraits of world leaders with a mix of derision and fascination. It would be easy to merely rag on these paintings. Of course they’re terrible; Bush is an amateur painter, and very literal-minded. Commentators have compared the works to coloring-book images and kitsch. No, George W. Bush’s paintings tell us nothing about Iraq. Correction: This article originally attributed a critique of the Bush paintings to Philip Kennicott which was actually made by Greg Allen “When I get to heaven I mean to spend a considerable portion of my first million years in painting, and so get to the bottom of the subject.” – Winston Churchill George W.

Bush’s art teacher believes in his passion. “His whole heart was in it,” said Bonnie Flood, a Georgia-based artist who reportedly spent one month — six hours a day — teaching the former president to paint.