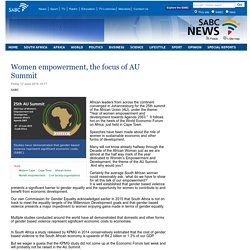 (SABC) African leaders from across the continent converged in Johannesburg for the 25th summit of the African Union (AU), under the theme: "Year of women empowerment and development towards Agenda 2063. " It follows hot on the heels of the World Economic Forum on Africa, just held in Cape Town. Speeches have been made about the role of women in sustainable economic and other forms of development. Many will not know already halfway through the Decade of the African Woman just as we are almost at the half way mark of the year dedicated to Women’s Empowerment and Development, the theme of the AU Summit. Certainly the average South African woman could reasonably ask, ‘what do we have to show for all this talk of our empowerment?’ Multiple studies conducted around the world have all demonstrated that domestic and other forms of gender based violence represent significant economic costs to economies.

Violence against women not an African issue: Angelina Jolie:Friday 12 June 2015. Angelina Jolie says its African women who have suffered most. 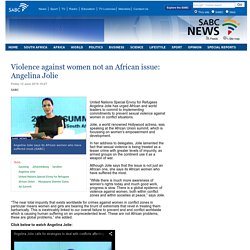 (SABC) United Nations Special Envoy for Refugees Angelina Jolie has urged African and world leaders to commit to implementing commitments to prevent sexual violence against women in conflict situations. Jolie, a world renowned Hollywood actress, was speaking at the African Union summit, which is focussing on women's empowerment and development. In her address to delegates, Jolie lamented the fact that sexual violence is being treated as a lesser crime with greater levels of impunity, as armed groups on the continent use it as a weapon of war. 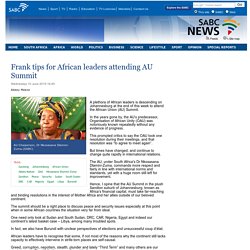 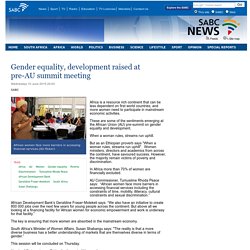 (AU flicker) Africa is a resource rich continent that can be less dependent on first world countries, and more women need to participate in mainstream economic activities. These are some of the sentiments emerging at the African Union (AU) pre-summit on gender equality and development. When a woman rules, streams run uphill. But as an Ethiopian proverb says "When a woman rules, streams run uphill".

In Africa more than 70% of women are financially excluded. AU Commissioner, Tumusiime Rhoda Peace says: “African women face more barriers in accessing financial services including the constraints of time, mobility, illiteracy, cultural constraints and sexual discrimination.” African Development Bank’s Geraldine Fraser-Moleketi says: “We also have an initiative to create 800 000 jobs over the next few years for young people across the continent. AU to discuss leaders’ tendencies to prolong stay in power:Monday 8 June 2015.

Burundi was plunged into a crisis after President Pierre Nkuruziza's announced a decision to run for third term. 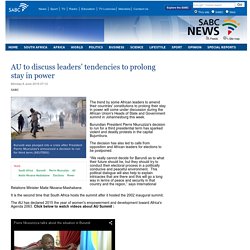 (REUTERS) The trend by some African leaders to amend their countries' constitutions to prolong their stay in power will come under discussion during the African Union's Heads of State and Government summit in Johannesburg this week. Burundian President Pierre Nkuruziza's decision to run for a third presidential term has sparked violent and deadly protests in the capital Bujumbura. The decision has also led to calls from opposition and African leaders for elections to be postponed. “We really cannot decide for Barundi as to what their future should be, but they should try to conduct their electoral process in a politically conducive and peaceful environment. 25th AU sitting faces many challenges:Tuesday 9 June 2015.

The AU says its concerned about the easy availability of weapons which it blames on criminal networks. 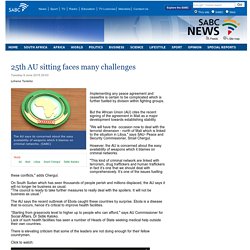 (SABC) Implementing any peace agreement and ceasefire is certain to be complicated which is further fuelled by division within fighting groups. But the African Union (AU) cites the recent signing of the agreement in Mali as a major development towards establishing stability. "We will have the occasion now to deal with the terrorist dimension - north of Mali which is linked to the situation in Libya," says SAU- Peace and Security Commissioner, Smail Chergul. However, the AU is concerned about the easy availability of weapons which it blames on criminal networks. "This kind of criminal network are linked with terrorism, drug traffickers and human traffickers in fact it’s one that we should deal with comprehensively.

On South Sudan which has seen thousands of people perish and millions displaced, the AU says it will no longer be business as usual. All systems go for AU summit:Sunday 7 June 2015. South Africa will play host to the 25th AU Summit in Sandton and Pretoria this week. 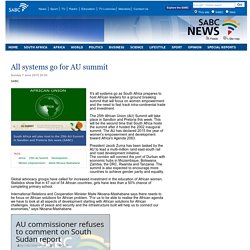 (SABC) It's all systems go as South Africa prepares to host African leaders for a ground breaking summit that will focus on women empowerment and the need to fast track intra-continental trade and investment. The 25th African Union (AU) Summit will take place in Sandton and Pretoria this week. This will be the second time that South Africa hosts the summit after it hosted the 2002 inaugural summit. The AU has declared 2015 the year of women's empowerment and development toward Africa's Agenda 2063.

President Jacob Zuma has been tasked by the AU to lead a multi-million rand east-south rail and road development initiative. Global advocacy groups have called for increased investment in the education of African women. International Relations and Cooperation Minister Maite Nkoana-Mashabane says there needs to be focus on African solutions for African problem.