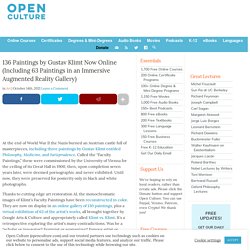 Called the “Faculty Paintings,” these were commissioned by the University of Vienna for the ceiling of its Great Hall in 1900, then, upon completion seven years later, were deemed pornographic and never exhibited. Until now, they were preserved for posterity only in black and white photographs. Riposte — Boris Taslitzky. Blast Furnaces — Elsie Driggs. Blast Furnaces, 1927 by Elsie Driggs (1898-1992) Like this: Like Loading... 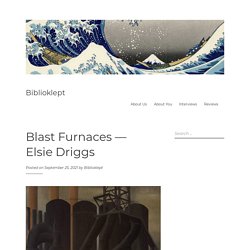 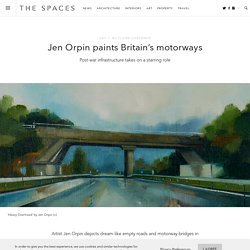 Orpin’s luminous paintings feature the monumental postwar infrastructure that lies on Britain’s arterial routes. These often-overlooked concrete structures sit between big skies and long tarmac roads and are part of a landscape in motion, appearing like they are about to vanish into the distance. ‘Forton Services’ by (c) Jen Orpin Orpin decided to paint these streamlined landmarks because they sparked memories of journeys she undertook after her late father suffered from a stroke in September 2015. 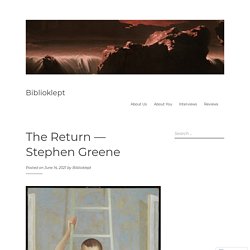 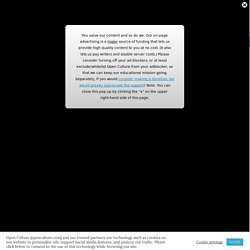 Filmmaker Michael Haneke takes a Hitchcockian approach in this regard, in nightmarish visions like Benny’s Video, The Piano Player, and Caché. “Haneke uses voyeurism to dismantle the space between the film and audience,” writes Popmatters,” and in doing so, he takes advantage of what might be thought of as Hitchcock’s voyeur apparatus and forces the audience to question its place within the narrative.”

Artist Explains His Motivation for Adding Pop Culture Characters and Objects to Old Thrift Store Paintings. A Harpooned Whale 1845 by Joseph Mallord William Turner 1775-1851. Paule and Rémi in the Dining Room — John Lessore. Waiting for Godot — Gordon Rayner. Hopper in Paris: The Birth of a Master. Edward Hopper, 24, realized one of his dreams when he moved to Paris in October 1906. 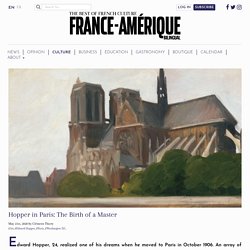 An array of works from his French years, which have had little public exposure, were set to be exhibited at the Phillips Collection in Washington D.C. from May 23. However, the current coronavirus pandemic and the subsequent closure of cultural institutions means this project has had to be postponed. Not to be outdone, France-Amérique has published the show’s paintings for you to admire in your living room! [Update: The Hopper in Paris exhibition will take place at the Phillips Collection in Washington D.C. from October 8, 2020, through January 3, 2021.] The painter was an innocent, serious young man when he arrived in the French capital. Interior Courtyard at 48 Rue de Lille, Paris, 1906. © Whitney Museum of American Art, New York Hopper was in heaven. 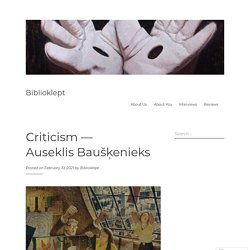 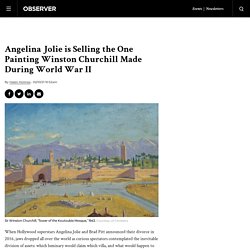 Courtesy of Christie's When Hollywood superstars Angelina Jolie and Brad Pitt announced their divorce in 2016, jaws dropped all over the world as curious spectators contemplated the inevitable division of assets: which luminary would claim which villa, and what would happen to the famous couple’s considerable art collection? According to a new report, next month, Angelina Jolie is angling to auction off a canvas in her possession that was painted by Winston Churchill; this sale is set to take place via Christie’s Auction House in London. According to the Associated Press, the painting is entitled Tower of the Koutoubia Mosque, and it’s expected to sell for between $2.1 million to $3.4 million.

According to Christie’s, this painting is the sole work created by Churchill during the Second World War, and it was completed after the conclusion of the Casablanca Conference in January 1943. Astounding 10 billion pixel panorama of vermeer’s girl with a pearl earring. Hip, Hip, Hoorah! — Karel Appel. Let’s Get out of Here — Victor Castillo. Painting “the Eternity of Time” “To make oil paint work on canvas the way ink works on paper.” 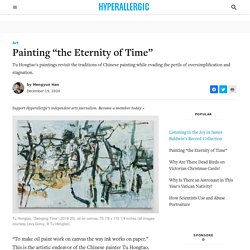 This is the artistic endeavor of the Chinese painter Tu Hongtao, who recently had his first European exhibition at Levy Gorvy in London (Tu Hongtao: Twisting and Turning, October 2–November 24, 2020). Such an attempt to bridge Eastern and Western painting traditions has informed works by Chinese painters since the start of the 20th century, during the Republican Era, accelerating debates over “traditional” culture and “Westernization.” At the same time, many Chinese painters who sought education in France were exposed to Impressionism, Cubism, and Art Informel, which led to various experiments combining European oil painting techniques and traditional Chinese ink painting upon their return to their homeland. 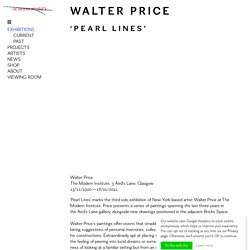 Price presents a series of paintings spanning the last three years in the Aird’s Lane gallery, alongside new drawings positioned in the adjacent Bricks Space. Walter Price’s paintings offer visions that straddle abstraction and representation, combining suggestions of personal memories, collective history and cultural ciphers within his constructions. Extraordinarily apt at placing the viewer, Price’s compositions invoke the feeling of peering into lucid dreams or surreal stage sets, bringing forth an awareness of looking at a familiar setting but from an unusual and disjointed view, as if a wall were removed to allow quiet observation from a specific perspective. The rich mercurial colours awash in Price’s paintings denote both atmosphere and the fractured spaces within the setting. Walter Price (b. Olivia Sterling paints nostalgia-filled pieces to deconstruct complex issues of othering.

A painter originally from the English town of Peterborough, Olivia Sterling’s works speak directly and poignantly to Britishness. Zooming in on references that display domestic scenes in reaction to the quiet countryside she grew up in, across her paintings viewers can expect to see references to Brownies and Rainbows through to party food, notably “scotch eggs, store-bought packs of cakes with cheap icing, panda pops, pink panthers and cocktail sausages”. Stylistically Olivia merges these references in a practice she brilliantly describes as “sugary”. Cézanne’s Hard Truths. If nothing else, the COVID-19 crisis has encouraged introspection. In my case, it’s been a chance to wander and weed through a library of several thousand volumes accumulated over half a century. As I was doing some routine fact-checking for this review, I opened a book on Cézanne and something fell out by surprise. What? Cauldron of the Sorceress — Odilon Redon. Untitled — Peter Busch. Saturday Night — George Petrovich Kichigin.

The title Hell is Empty comes from William Shakespeare’s play The Tempest, when the spirit Ariel recounts the events of those shipwrecked on Prospero’s island: ...All but mariners Plunged in the foaming brine and quit the vessel, Then all afire with me. The Apprehension of Ted Kaczynski (Lincoln, Montana – April 3, 1996) — Sandow Birk. The Sisters — Ralph Peacock.

The Sisters, 1900 by Ralph Peacock (1868–1946) Like this: Like Loading... Related. Speak! Speak! — John Everett Millais. Parson Weems’ Fable — Grant Wood. Japanese Illustrated Books. This collection includes over 650 eighteenth- and nineteenth-century Japanese illustrated books held in The Met's Department of Asian Art. Nearly four hundred of these are from an important acquisition in 2013 of the Arthur and Charlotte Vershbow collection of Japanese illustrated books, purchased with a gift from the Mary and James G. Wallach Family Foundation. Artists represented in the collection include Utamaro, Hokusai, and Hiroshige, who are best known today for their woodblock prints, but who also excelled at illustrations for deluxe poetry anthologies and popular literature. Browse All. Ennui — Walter Sickert. Seminar — Eric White. The Gallien Girl — Frantisek Kupka. Hunting — Xiao Guo Hui.

The Cruise — Mary Adshead. The Massacre of the Innocents — Mitchell Villa. World’s oldest hunting scene shows half-human, half-animal figures—and a sophisticated imagination. Some 44,000 years ago, an artist climbed high onto a cave ledge on an Indonesian island, paintbrush in hand. Perhaps inspired by spiritual visions, the artist sketched a dynamic scene featuring tiny, animal-headed hunters armed with spears cornering formidable wild hogs and small buffaloes. In a new study, researchers argue that the scene's visionary storytelling—which they claim represents the oldest known figurative art made by modern humans—shows that people already had imaginations much like our own at the time of the cave painting, and likely much earlier. Are we looking at a Madman's Doodles or Messages from another World? Hidden in Henry's Room: The Secret Life of a Janitor. St. Francis and the Birds — Stanley Spencer.

Big Mouth — James Rieck  Girl in a Red Dress Reading by a Swimming Pool — John Lavery. The Memory Room — Lola Gil. Victory Girls — Albert Tucker. Dada Is Dead — Adrian Ghenie. Fragments of incredible happiness. It has been a great success story for Neo Image Matloga since he pursued his Fine Arts studies at the University of Johannesburg and graduated in 2015, the same year he completed a residency at the Bag Factory. Neo Matloga is a young South African artist whose talent and hard work has already earned him a great reputation. His work has been showing at Turbine Art Fair since 2014 and since at FNB Joburg Art Fair since 2015. His list of selected group exhibitions is long and impressive and he now adds two solo exhibitions to his resume.