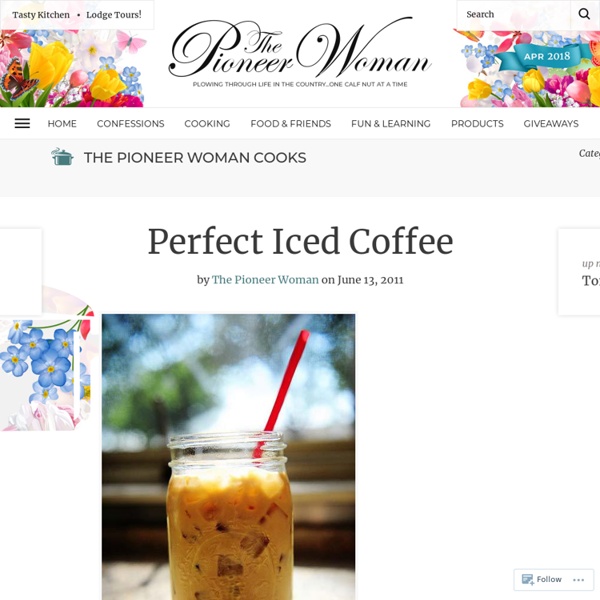 Iced coffee is my life. When I wake up, often around the time party animals on the west coast are just heading home, I start each day not with a cup of freshly brewed hot java, but with a tall, blessed glass of creamy iced coffee in a glass. I’ve been an iced coffee freakazoid for years and years. To say I couldn’t live without it is an understatement. It gives me the tools I need to cope. Iced coffee is a complicated thing, and there are many different approaches. 1. Given the previous set of facts, one would assume that the logical solution would be to brew hot coffee, then transfer the brew to the fridge, allow it to cool, and use it to make iced coffee from there. There are reasons this method results in a smoother, richer, more delicious concentrate than simply brewing strong coffee and refrigerating it. (Note: I’ve totally adapted/tweaked coffee/water amounts to suit my own tastes. I start with a big ol’ container. Rip open a pound of ground coffee. Pour in the coffee. Glorious.

Watermelonade Recipe at Epicurious photo by Roland Bello yield Makes 1 gallon (serves 16) active time 30 min iPads at center of local school study Nate Klein began using an iPad when summer school classes began last month at Chippewa Falls Middle School. At first, it took time to adjust to Apple’s version of a tablet computer. “It’s kind of hard to type,” he said, pointing out the device has a virtual keyboard instead of an actual one. But Klein, 14, who will be entering the eighth grade this fall, got used to using the device and now enjoys it.

The Most magical butterbeer Wingardium Leviosa! Quidditch! Stupefy! Riddikulus! Albus Dumbledore! Easy Homemade Oven Cleaner Recipes With the exception of one of the recipes below, you can make oven cleaners that are much safer for the environment than commercial products containing harsh chemicals. They’re also much more frugal! Baking Soda Water Dish Detergent Fill a spray bottle with water and spray surface generously.Generously sprinkle baking soda over the water. Leave overnight.The next day wipe out much of the baking soda and grime.Soak a sponge in hot water, squeeze out excess water and scrub away grime with liquid dish detergent first drizzled over the sponge. Ammonia Water Baking soda

Magic Sauce Recipe I call this the magic sauce recipe. In part, because it makes everything it touches shimmer with deliciousness. It's magic like that. Technically, it's a riff on a chimichurri sauce - one that veered off the rails in a big way. Much tweaking has rendered it a distant second cousin. Iced Coffee How-To - Imbibe Magazine Apparent simplicity is a precarious thing. Iced coffee seems like it should be a cinch—just throw some strong brew on the rocks and you’re good to go. But coffee is a fragile potion, sensitive to brewing techniques and extreme temperatures. As a result, iced coffee is often acrid, sour, flat or disappointingly weak. Mairi Beautyman: Four Organic Ways to Kill Ants It could happen to anyone. Maybe you leave some sticky black cherries out. A bit too long. And maybe you let one uninvited guest stay.

Getting Into the Green (sorry, it's not about money) Getting our kids to eat their veggies can be tough, even kids who like veggies can have a hard time eating the proper amount.They are always on the run and need lots of good energy foods.A few months ago I picked up a book called The Raw Detox Diet for myself. I was feeling a bit sluggish and needed a good inner scrubbing! One of the healthful things the author suggests to have every day is something that is brilliantly named Green Lemonade. She says in the book that it can become addicting, I thought ACK how could kale juice become addicting? I gave it the benefit of the doubt and I started juicing this green lemonade every morning. Handy Ingredient Substitute Recipes Ingredient substitutions are mainly used when baking or cooking dishes and you realize at the last minute you’re out of stock of the necessary food item. There may be a slight taste or texture change when using them but the results are generally acceptable and many won’t notice the difference at all. You can download a handy chart here (pdf). It’s nothing fancy but you’ll find a jam packed two pages with items sorted in alphabetical order.

Truffled Mac and Cheese Share this image Share It Pin It You'd think that after all of the rich food I ate over Thanksgiving that I'd be subsisting on carrots and celery through December. Instead, last night I decided that Mac and Cheese would be a more appropriate meal and Kraft just wasn't going to cut it. I used this recipe and substituted Horseradish Cheddar and added some truffle salt for a little bite and an indulgent touch.

What is Tea? lesson #01 Two leaves and a bud Plucking tea Tea garden Welcome to the Beginners course of TeaClass. The Book Thief Share Video Based on its title, you might think that The Book Thief is a spy thriller or a Holmes-style detective story. But really, this is the emotional story of a young girl living in Germany during the Holocaust. Yep, a ten-year-old girl is the title's thief. Jello Shots! This Post is ALL Mandi. I think she has had a few of these this morning so disregard her grammar and over excitement. See ya next week! - Dan Peach Upside Down Cake Login to rate this recipe. total ratings: 6 Average rating 5.0 from 6 reviews