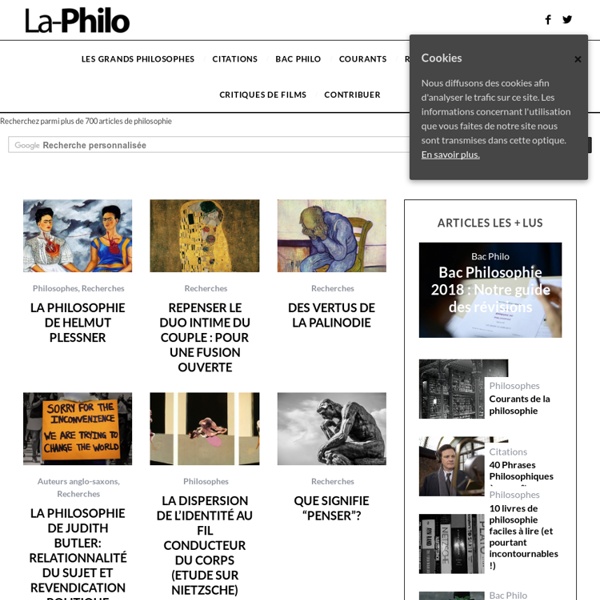 This free online encyclopedia has achieved what Wikipedia can only dream of The Stanford Encyclopedia of Philosophy may be the most interesting website on the internet. Not because of the content—which includes fascinating entries on everything from ambiguity to zombies—but because of the site itself. Its creators have solved one of the internet’s fundamental problems: How to provide authoritative, rigorously accurate knowledge, at no cost to readers. 40 Belief-Shaking Remarks From a Ruthless Nonconformist If there’s one thing Friedrich Nietzsche did well, it’s obliterate feel-good beliefs people have about themselves. He has been criticized for being a misanthrope, a subvert, a cynic and a pessimist, but I think these assessments are off the mark. I believe he only wanted human beings to be more honest with themselves.

Accueil CancelEditDeletePreviewrevert Text of the note (may include Wiki markup) Could not save your note (edit conflict or other problem). Portal:Philosophy Historically, philosophy encompassed all bodies of knowledge. From the time of Ancient Greek philosopher Aristotle to the 19th century, "natural philosophy" encompassed astronomy, medicine, and physics. For example, Newton's 1687 Mathematical Principles of Natural Philosophy later became classified as a book of physics. In the 19th century, the growth of modern research universities led academic philosophy and other disciplines to professionalize and specialize. In the modern era, some investigations that were traditionally part of philosophy became separate academic disciplines, including psychology, sociology, linguistics, and economics. Other investigations closely related to art, science, politics, or other pursuits remained part of philosophy.

Openclipart Log in | Sign Up Upload Clipart Popular All-Time This Week << Select a sorting option Most Popular Weekly learn to count by dkdlv 2013-04-17 Contents Andrew Chrucky e-mail: ditext@ditext.com Online Papers and Books Anarchism: The Unfinished RevolutionPhilosophy of Liberal Education Meta-Encyclopedia of Philosophy Links seven outstanding dictionaries and encyclopedias on the internet under one set of entries. Problems from Wilfrid Sellars Comprehensive bibliographies of works by and on Wilfrid Sellars, including many unpublished correspondences. Authors and Works Cited by Wilfrid Sellars A compiled bibliography of references cited by Sellars. Philosophical Alternatives from C. D.

Žižek on OOO The core of object-ori­ented-onto­logy (ooo) developed by Levi Bry­ant1 can be summed up by the for­mula from sub­ject back to sub­stance. And, in so far as sub­ject is cor­rel­at­ive with mod­ern­ity (recall Lacan’s thesis about the Cartesian sub­ject as the sub­ject of mod­ern sci­ence), we can also say that ooo fol­lows the premise rendered by the title of Bruno Latour’s fam­ous book, We Were Never Modern—it endeavors to bring back the pre­mod­ern enchant­ment of the world. The Lacanian answer to this should be a para­phrase of his cor­rec­tion of the for­mula “god is dead” (god was always already dead, he just didn’t know it): we were always already mod­ern (we just didn’t know it).

Is Google Making Us Stupid? - Nicholas Carr Illustration by Guy Billout "Dave, stop. Stop, will you? Stop, Dave. Philosophical Quotes, Thought-Provoking Sayings Related Quotes Hmmm Philosophy Truth Wise Words We are more often treacherous through weakness than through calculation. ~François VI de la Rochefoucault A man with one watch knows what time it is; a man with two watches is never quite sure. ~Lee Segall