Welcome to my Vlog. The Platform Abstraction Advantage of PaaS. When I talk to IT executives at various conferences, one question I always encounter is whether they should go with IaaS+ or PaaS. 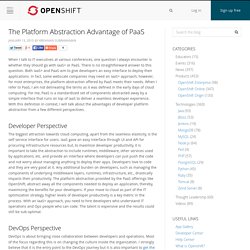 There is no straightforward answer to this question. Both IaaS+ and PaaS aim to give developers an easy interface to deploy their applications. In fact, some webscale companies may need an IaaS+ approach; however, for most enterprises, the platform abstraction offered by PaaS meets their needs. When I refer to PaaS, I am not delineating the terms as it was defined in the early days of cloud computing. For me, PaaS is a standardized set of components abstracted away by a simple interface that runs on top of IaaS to deliver a seamless developer experience. Developer Perspective. Now that .Net is open, Microsoft should finish the job. As you will have read elsewhere, Microsoft has announced that much of .Net will become open source, hosted at the .Net Foundation. 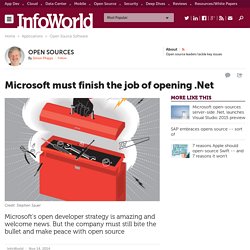 It has also announced it will support both Linux and Mac OS X. Since it is using the old and minimalist MIT license (which has no patent terms included), there is also a patent pledge. In addition, the company is introducing full-featured no-cost versions of its developer tools, though they remain proprietary; the Visual Studio Community license won’t even allow it to be used for enterprise application development. Securing Docker’s Future with SELinux and the Open Source Way. Docker has been in the news a lot lately with the first DockerCon event in San Francisco this past month and the release of Docker 1.0. 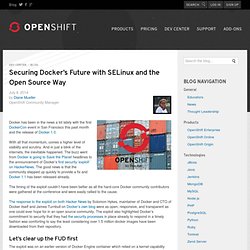 With all that momentum, comes a higher level of visibility and scrutiny. And in just a blink of the internets, the inevitable happened. The buzz went from Docker is going to Save the Planet headlines to the announcement of Docker’s first security ‘exploit’ on HackerNews. The good news is that the community stepped up quickly to provide a fix and Docker 1.1 has been released already. Sequencing the Open Source DNA of the Modern Enterprise Cloud. For Non-Profits, Open Source and Educational Institutions. For Non-Profits, Open Source and Educational Institutions. OpenStack: Five Things Every Executive Needs to Know. Which company contributes most to OpenStack? July 11, 2013 Follow @tsamson_IW. 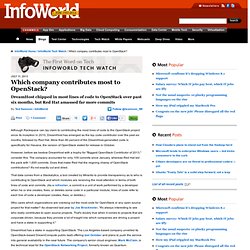 OpenShift Origin Community Day (Mountain View, CA) - Eventbrite. OpenShift Origin Community Day (Mountain View, CA) Tickets, Mountain View - Eventbrite. Maximize the public benefit of federal technology by sharing government-developed software under an open source license. Anatomy of an open source cloud. The use of the cloud as an abstraction is quite common for the distributed system that is the Internet, but the past few years have seen this abstraction expanded to incorporate highly virtualized and scalable infrastructures that are easily provisioned as a service (locally, remotely, or a combination of local and remote resources). 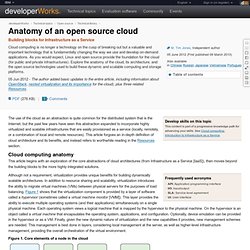 This article forgoes an in-depth definition of cloud architecture and its benefits, and instead refers to worthwhile reading in the Resources section. Cloud computing anatomy This article begins with an exploration of the core abstractions of cloud architectures (from Infrastructure as a Service [IaaS]), then moves beyond the building blocks to the more highly integrated solutions. Although not a requirement, virtualization provides unique benefits for building dynamically scalable architectures. Figure 1. Figure 2. With the basic architecture of a cloud defined, let's now explore where open source is being applied to build out a dynamic cloud infrastructure. CloudOpen 2012: Schedule. Tier-3-expands-enterprise-cloud-platform-with-multi-framework-web-fabric-and-data-fabric-150579905. BELLEVUE, Wash., May 8, 2012 /PRNewswire/ -- Tier 3, Inc., the enterprise cloud platform company, today announced the next release of the Tier 3 Enterprise Cloud Platform, now with the industry's most comprehensive set of enterprise-grade cloud services in a single consolidated platform. 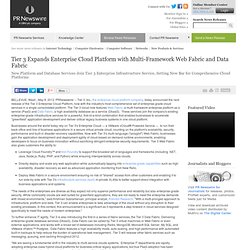 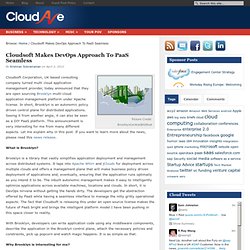 In short, Brooklyn is an autonomic policy driven control plane for distributed applications. Constructing a Community : Myths and Realities of the Open Development Model. The open development model of software production has been characterized as the future model of knowledge production and distributed work. 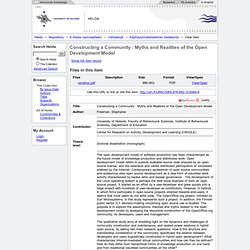 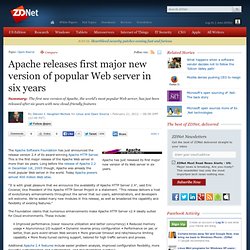 The Apache Software Foundation has just announced the release version 2.4 of its award-winning Apache HTTP Server. This is the first major release of the Apache Web server in more than six years. Long before the release of Apache 2.2 in December 1st, 2005 though, Apache was already the most popular Web server in the world. Today Apache powers almost 400 million Web sites. "It is with great pleasure that we announce the availability of Apache HTTP Server 2.4", said Eric Covener, Vice President of the Apache HTTP Server Project in a statement. The Foundation claims that numerous enhancements make Apache HTTP Server v2.4 ideally suited for Cloud environments. Additional Apache 2.4 features include easier problem analysis, improved configuration flexibility, more powerful authentication and authorization, and documentation overhaul.

On the Decline of the GPL. Guess which open source license is more popular than the MIT, Artistic, BSD, Apache, MPL and EPL put together? Surprise: it’s the GPL. True, usage appears to be in steep decline. The decline of the GPL. Canonical aligns Kubuntu as community flavor. February 06, 2012, 8:28 PM — Canonical appears to be streamlining its focus on the desktop by cutting funding for Kubuntu work after the release of the upcoming 12.04 releases this April. 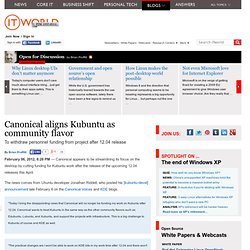 KwanWest2005. HP Opensources WebOS: My Quick Thoughts. By Krishnan Subramanian on December 9, 2011 Picture Credit:Slashgear.com HP (previous CloudAve coverage) today announced that they are opensourcing their WebOS mobile operating system. After their initial plan to shed WebOS completely, there was a rethink once Meg Whitman took over as CEO. They were dillydallying for many weeks before making this smart move. HP today announced it will contribute the webOS software to the open source community.HP plans to continue to be active in the development and support of webOS.