The advantages of an open source ERP system. The main reason larger companies use open source Enterprise Resource Planning (ERP) systems is because they are cheaper and easier to customize. 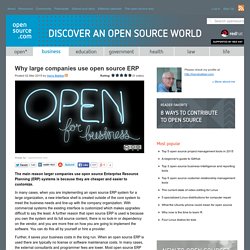 In many cases, when you are implementing an open source ERP system for a large organization, a new interface shell is created outside of the core system to meet the business needs and line-up with the company organization. With commercial systems the existing interface is customized which makes upgrades difficult to say the least. How Facebook is eating the $140 billion hardware market. Facebook/Mark Zuckerberg Facebook CEO Mark Zuckerberg It started out as a controversial idea inside Facebook.

In four short years, it has turned the $141 billion data center computer hardware industry on its head. Facebook's extraordinary Open Compute Project is doing for hardware what Linux, Android, and many other popular products did for software: making it free and "open source. " That means that anyone can look at, use, or modify the designs of the hugely expensive computers that big companies use to run their operations.

In software, open source has been revolutionary and disruptive. OCP threatens to do the same to decades-old hardware companies like Cisco. Oracle Sales Erode as Startups Embrace Souped-Up Free Software. Dan Wagner, the chief executive officer of U.K. 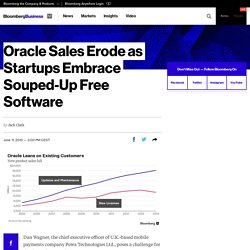 -based mobile payments company Powa Technologies Ltd., poses a challenge for database giant Oracle Corp. Wagner’s company last year began shifting away from pricey products from Oracle and International Business Machines Corp., replacing them with open-source software, which is freely available and can be modified. Now, Wagner said the closely held company is converting virtually all of its operations to free database software. “They scale and operate extremely well and they don’t cost anything,” Wagner said. Other companies share Wagner’s view and are shifting to software whose code is public. “There was pessimism for a decade on whether those things could stand up. Sales Decline The impact shows up in Oracle’s sales of new software licenses, which have declined for seven straight quarters compared with the period a year earlier.

How open software has become a source of grief for tech majors like Cisco, IBM & Oracle. NEW DELHI | BENGALURU: Industry bodies US-India Business Council and the Confederation of Indian Industry have urged the government to reconsider its push for open source software that will cut the cost of licensing from big companies such as Cisco, IBM and Oracle. 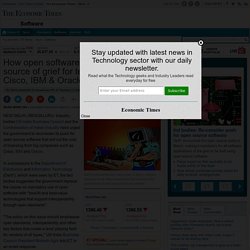 In submissions to the Department of Electronics and Information Technology (DeitY), which were seen by ET, the two bodies suggested the government replace the clause on mandatory use of open software with "best-fit and best-value technologies that support interoperability through open standards". "The policy on this issue should emphasise open standards, interoperability and other key factors that create a level playing field for vendors of all types," US-India Business Council President Mukesh Aghi told ET in an email response. For technology giants, billions of dollars are at stake. "In the future, the government has to spend money on IT and 15-20% of it can be shaved off comfortably by killing the licensing cost. Manage Your IT Infrastructure Effectively with Zentyal.

Read about how Inmantec Institutions switched to Zentyal (formerly e-box Platform), which is a program for a Linux server and is meant for SMBs. 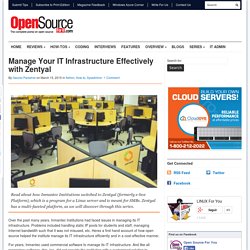 Zentyal has a multi-faceted platform, as we will discover through this series. Over the past many years, Inmantec Institutions had faced issues in managing its IT infrastructure. Problems included handling static IP pools for students and staff, managing Internet bandwidth such that it was not misused, etc. Heres a first hand account of how open source helped the institute manage its IT infrastructure efficiently and in a cost-effective manner. For years, Inmantec used commercial software to manage its IT infrastructure. Zentyal is a Linux-based business server, which is a replacement for Microsoft Small Business Server and Microsoft Exchange Server. Indian Government Enacts Policy to Only Use Open-source Apps. The Indian government announced a policy yesterday that makes it mandatory to use open-source software in building apps and services, in an effort to “ensure efficiency, transparency and reliability of such services at affordable costs.” 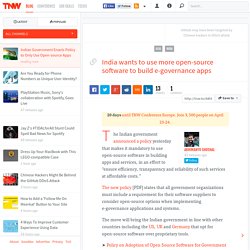 A lot of people are mad that Apple bought this tiny company and shut it down. Seldon Wants to Make Life Easier for Data Scientists. It feels that these days we live our whole digital lives according mysterious algorithms that predict what we’ll want from apps and websites. 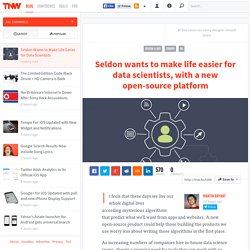 A new open-source product could help those building the products we use worry less about writing those algorithms in the first place. As increasing numbers of companies hire in-house data science teams, there’s a growing need for tools they can work with so they don’t need to build new software from scratch. That’s the gambit behind the launch of Seldon, a new open-source predictions API launching early in the new year. Seldon is designed to make it easy to plug in the algorithms needed for predictions that can recommend content to customers, offer app personalization features and the like.

A DIY Electric Car You Can Build Yourself. If you have the right tools, you can build a street-legal DIY car in less time than it takes to figure out some IKEA furniture. 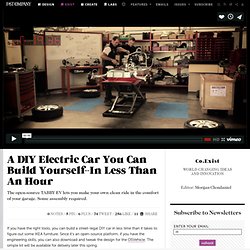 Since it's an open-source platform, if you have the engineering skills, you can also download and tweak the design for the OSVehicle. The simple kit will be available for delivery later this spring. The first iteration, called “TABBY,” comes only with the basics--owners will have to add everything from an engine to turn signals. This spring, the company will release a second version, “Urban TABBY,” with everything already built-in, including the option for a stock electric motor. The company is also working with partners to build a hybrid engine that will be available late this year. "We saw a worldwide need for a common platform for the automotive industry," says Francisco Liu, CEO of OSVehicle.

The company plans to launch crowdfunding shortly to kick off production of the first cars. AndrOpen Office is a full office suite for Android (based on Apache OpenOffice) There’s no shortage of apps for viewing and editing office documents on an Android phone, tablet, or TV box. 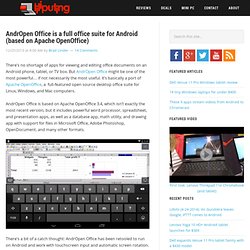 But AndrOpen Office might be one of the most powerful… if not necessarily the most useful. It’s basically a port of Apache OpenOffice, a full-featured open source desktop office suite for Linux, Windows, and Mac computers. AndrOpen Office is based on Apache OpenOffice 3.4, which isn’t exactly the most recent version, but it includes powerful word processor, spreadsheet, and presentation apps, as well as a database app, math utility, and drawing app with support for files in Microsoft Office, Adobe Photoshop, OpenDocument, and many other formats. Switch to open source successfully completed, city of Munich says.

IDG News Service - Munich's switch to open-source software has been successfully completed, with the vast majority of the public administration's users now running its own version of Linux, city officials said Thursday. + ALSO ON NETWORK WORLD 12 Linux distros to watch in 2014 +

PAHO recommends 4-7 R&D projects for consideration in December WHO meeting. (revised October 25, 2013) According to persons involved in the negotiations, PAHO will forward from four to seven R&D demonstration projects to the WHO, for consideration at the December meeting. The projects were selected from 29 that had been proposed. Some rough notes on the 29 projects are available here: The projects were supposed to address new models for financing open innovation, delinking R&D costs from product price.

The relevant WHO resolutions include WHA66.22 and the decision points in A66/Div/3, attached below. Government backtracks on its preference for open source. The government has quietly backtracked from its publicly declared preference for using open source over proprietary software. The Government Digital Service (GDS) published its Service Design Manual in March, laying down mandatory standards for developing all new digital public services. The document stated: “Use open source software in preference to proprietary or closed source alternatives, in particular for operating systems, networking software, web servers, databases and programming languages.”

Mark Evans But Computer Weekly has learned that the statement has since been removed, diminishing the preference for open source and instead positioning open source equally alongside proprietary products under a new section titled “Level playing field”. The revised manual now says: “With the growth of free/open source software, many high-quality technology products are freely available for government and its suppliers to use and improve. Shift in focus.

Please Help Save Open Source Seeds Now. Seeds have much in common with code. Indeed, I wrote an entire book about how genomics parallels the world of software. In particular, they suffer from the same problem: patents. Patents give control over key technologies, which makes the corresponding commons even more valuable for the freedom it offers. And alongside open source code, there are open source seeds. These are those that have been developed over thousands of years by nameless farmers, and are owned by no one. Open Source for America. Each year, Open Source for America (OSFA) honors individuals, projects, and deployments that support OSFA’s mission to educate decision makers in the U.S. Federal government about the advantages of using free and open source software; encourage Federal agencies to give equal priority to procuring free and open source software in all of their procurement decisions; and to provide an effective voice to the U.S.

Federal government. Categories Awards are presented in three categories: Individual Contributor: Contributor from within OSFA : A member of OSFA who has made extraordinary contributions to the organization itself.Contributor from the Open Source Community/Government: An individual who has made extraordinary contributions to the promotion of open source adoption in the U.S. Federal government, or a U.S. Ostatic : Google's #Opensource YouTube... Google's Open Source YouTube Channel. By Sam Dean - Mar. 18, 2013Comments (0) Global Atlas for Solar & Wind. OpenStreetMap: the Open Source of the Mobile Age. Subscribe to this blog About Author. The Fifth-Biggest Site in the World Operated on a Budget of $27M Last - Liz Gannes.

The Wikimedia Foundation, which runs Wikipedia, had expenses of $27 million this past fiscal year, and raised $38.5 million to support them. The only nonprofit organization within the world’s Top 40 Web sites — Wikipedia is at No. 5 — the site serves 19 billion page views per month. Have you been a digital angel?

How one scientist learned Python, tweaked mMass software code, and published new tool via PLoS ONE. Image by opensource.com Over the last months, I became more and more aware of the "open" movement. Connectors To MySQL Community Via MariaDB. Acquia Secures $30M In New Funding To Support Expansion. Acquia, the Burlington, Massachusetts-based software company co-founded by open-source CMS Drupal creator Dries Buytaert, has raised $30 million in new funding to boost enterprise adoption of the social publishing system, primarily across Europe and Asia Pacific.

Led by new backer Growth Capital with participation from Goldman Sachs, Accolade Partners, North Bridge Venture Partners, Sigma Partners and Tenaya Capital, the financing round brings the total amount of capital invested in the company to date to $68.5 million. With the freshly injected cash, Acquia intends to increase its sales and marketing efforts and ramp up its international expansion across Europe and Asia Pacific.