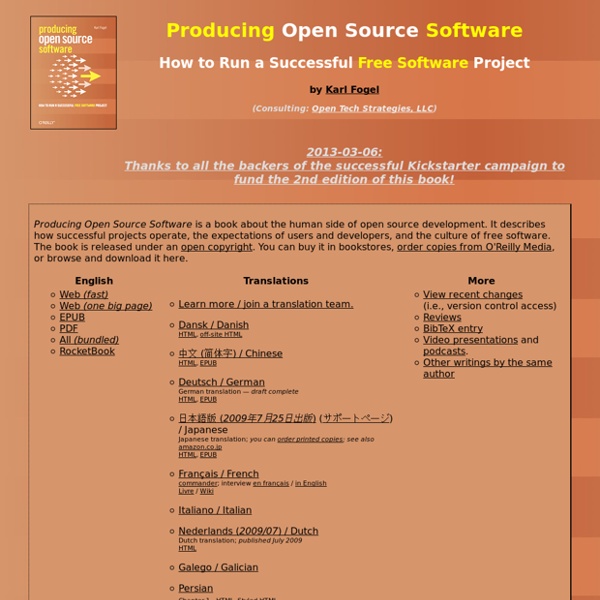 How To Successfully Compete With Open Source Software (This post recently got linked on Japanese blogs. 英語より日本語の方が楽な方：これを和訳しようとしています。日本語版はこちらです。) Every once in a while, somebody on the Business of Software forums asks whether there is any point to trying to compete with open source software (OSS — essentially, software anyone can use and modify without needing to pay money or receive permission). This is very possible, as folks such as Joel Spolsky pointed out in the ensuing discussion. I particularly liked one comment on Hacker News about how to compete as Enterprise software. My bona fides: I run Bingo Card Creator, which makes educational bingo cards for teachers and parents. Thus, my comments are about the other 99% of OSS projects, the low-profile projects which a) do useful things for people and b) you have never heard of. I like OSS, too: I make extensive use of OSS in my business and at my day job. Places Where Software Developers Can Outdo OSS: 1) Marketing Software solves problems. 2) Design That design is nice and clean. 5) Support

The H Open - Why Making Money from Free Software Matters 26 April 2010, 11:11 by Glyn Moody Free software began as a political movement: its central aim was – and remains – the propagation of freedom. Few would deny the importance of the first two aspects of free software – as an ideology and as a methodology – but the future impact of its business model is probably under-appreciated. Businesses based around free software have to address a central conundrum: how is it possible to make money from something that by definition is freely available? I had quit my job at MIT to start the GNU project. Despite the high price tag – and the fact that anyone could make a copy – Stallman's tapes soon sold quite well: I was getting some eight to ten orders a month and that was enough for me to live on . That fact also helped drive the rise of the first paid-for GNU/Linux distros in the 1990s. The operators of one of those mirrors, at the Manchester Computing Centre, decided to modify the code to create their own distribution.

Opinion / Lead : Like poetry for software Mirza Ghalib, the great poet of 19th century Delhi and one of the greatest poets in history, would have liked the idea of Open Source software. A couplet Mirza Ghalib wrote is indicative: Bik jaate hain hum aap mata i sukhan ke saath Lekin ayar i taba i kharidar dekh kar (translated by Ralph Russell as: I give my poetry away, and give myself along with it But first I look for people who can value what I give). Free versus proprietary Ghalib’s sentiment of writing and giving away his verses reflects that of the Free and Open Source software (FOSS) movement, where thousands of programmers and volunteers write, edit, test and document software, which they then put out on the Internet for the whole world to use freely. The question many economists and others have pondered, and there are many special issues of academic journals dedicated to this question, is why software programmers and professionals, at the peak of their skills, write such high quality software and just give it away.

Ides of March brings the Romans to 0 A.D.