SourceForge. SourceForge is a web-based service that offers a source code repository, downloads mirrors, bug tracking and other features. 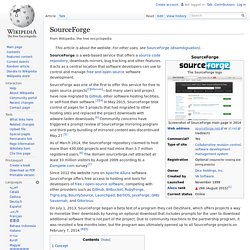 It acts as a central location that software developers can use to control and manage free and open-source software development. SourceForge was one of the first to offer this service for free to open source projects[2][discuss]—but many users and project have now migrated to GitHub, other software hosting facilities, or self-host their software.[3][4] In May 2015, SourceForge took control of pages for 5 projects that had migrated to other hosting sites and replaced the project downloads with adware-laden downloads.[5] Community concerns have triggered a prompt review of SourceForge mirroring program and third-party bundling of mirrored content was discontinued May 27.[5] Concept[edit] The vast number of users at SourceForge.net (over 3 million as of 2013)[7] exposes prominent projects to a variety of developers and can create a positive feedback loop. 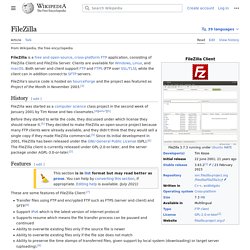 Client binaries are available for Windows, Linux, and Mac OS X, server binaries are available for Windows only. The client supports FTP, SFTP and FTPS (FTP over SSL/TLS). Support for SFTP (SSH File Transfer Protocol), which can be used to share folders over a network, is not implemented in FileZilla Server.[3] FileZilla's source code is hosted on SourceForge and the project was featured as Project of the Month in November 2003.[4] However, there have been criticisms that SourceForge bundles malicious software with the application; and that FileZilla stores users' FTP passwords insecurely.

History[edit] FileZilla was started as a computer science class project in the second week of January 2001 by Tim Kosse and two classmates[who?]. Features[edit] These are some features of FileZilla.[6] Reception[edit] Criticism[edit] Bundled adware issues[edit] Free Accounting Software. Getting involved. This article describes how both new and experienced Arch users can contribute to the community. Note that this is not an exhaustive list. Official Arch Linux projects Post on the forums One of the easiest ways to get involved is participating in the Arch Linux Forums, which allow getting to know the community and help new users.

Please get accustomed with Forum etiquette. Improve this wiki ArchWiki is a collaboratively maintained Arch Linux documentation. Join the chatroom You can help other users to solve problems on the IRC Channel. Report installed packages pkgstats provides a cron job that sends a list of the packages installed on your system, along with the architecture and the mirrors you use, to the Arch Linux developers in order to help them prioritize their efforts and make the distribution even better. Fix and report bugs Reporting and fixing bugs on the bug tracker is one of the possible ways to help the community. 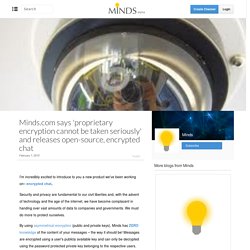 Security and privacy are fundamental to our civil liberties and, with the advent of technology and the age of the internet, we have become complacent in handing over vast amounts of data to companies and governments. We must do more to protect ourselves. By using asymmetrical encryption (public and private keys), Minds has ZERO knowledge of the content of your messages – the way it should be! Messages are encrypted using a user's publicly available key and can only be decrypted using the password protected private key belonging to the respective users.

Encrypted messages and emails have been around for a while, but they come with a steep learning curve which tends to put people off. Some developers will have you believe that you shouldn't worry about scalability until it is a problem, ie. you have a lot of traffic. This is only the beginning. Want to know more?

Welcome to The Open Source Initiative.