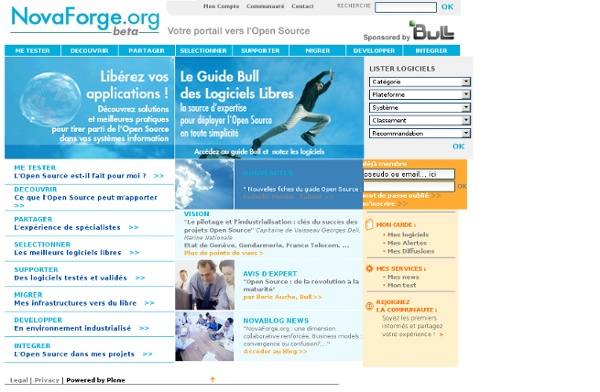 March of the Penguin: Ars looks back at 20 years of Linux The Linux kernel was originally created by Linus Torvalds, a Finnish computer science student, and first announced to the world on August 25, 1991—exactly 20 years ago today. At the time, Torvalds described his work as a "hobby" and contended that it would not be "big and professional" like the GNU project. But the Linux kernel turned out to be one of the most significant pieces of open source software ever developed. Over the past two decades, it has grown from a humble hobby project into a global phenomenon that runs on everything from low-cost e-book readers to a majority of the world's supercomputers. Here's how it grew.

Application Development and Deployment in the Hybrid Cloud Your Collaborative Software Delivery Platform CollabNet TeamForge® is the industry's only open and extensible collaborative software delivery platform for distributed teams. It enables organizations to improve collaboration, agility and governance by connecting teams, processes, IP and tools via a centralized, secure, web-based system. With TeamForge, your entire organization can collaborate and become more agile at scale. And it scales to tens of thousands of users.

ListOfOpenSourcePrograms List Of Open-source Programs (LOOP) for Microsoft Windows Operating Systems What is the LOOP list? This is a list of the best open-source applications that run on Windows. Feel free to edit this list and add any programs that meet the criteria below. The purpose of this list is to demonstrate the quality of open-source applications and advocate the open source software development model. To learn more, read the FAQ - Frequently Asked Questions.

Application lifecycle management ALM software suites[edit] Some specialized software suites for ALM are: See also[edit] 100+ awesome free and open source applications - Software - Seopher.com Posted on Tuesday 27th of September 2011 at 13:05 in SoftwareIt has always amazed me quite how many incredible, varied and useful applications are available for free on the Internet. Be it free, open source, web-based or merely passive trials - the number of top quality items on offer is huge. The purpose of this list is to help people realise that the free and open source software communities are expansive and generous. In these tense economic times, raising awareness of such projects is something I'm more than happy to do. If you feel that I've missed something good off the list, please leave a comment at the bottom - I read absolutely every one. Image, Image Editing and Graphics

Why so many DevOps conversations focus on Deployment  - Blog - dev2ops - Solving Large Scale Web Operations and DevOps Problems Other people’s initial reactions to new concepts or ideas always fascinate me. Sometimes the reactions are in line with what I expected. Sometimes they focus in on something I wasn’t expecting. One of the more curious reactions I’ve received lately is: “Why does DevOps focus so much on deployment?”.

15+ Awesome Open Source Graphics Software List Cenon – Cenon is a graphical tool of a special kind. Build upon a modular graphical core, Cenon offers a wide variety of possibilities and applications. The best of all, the Cenon core is free software, available with full source codes, and at home on many computer platforms. It is capable of doing Desktop publishing, vector graphic transformation etc. Dia – Dia is roughly inspired by the commercial Windows program ‘Visio’, though more geared towards informal diagrams for casual use.

DevOps DevOps (a portmanteau of development and operations) is a software development method that stresses communication, collaboration and integration between software developers and information technology (IT) operations professionals.[1][2] DevOps is a response to the interdependence of software development and IT operations. It aims to help an organization rapidly produce software products and services.[3][4][5][6][7] Companies with very frequent releases may require a DevOps awareness or orientation program. Christian mythology Christian mythology is the body of myths associated with Christianity. Within contemporary Christianity, the appropriateness of describing Christian narratives as “myth” is a matter of disagreement. George Every claims that the existence of "myths in the Bible would now be admitted by nearly everyone", including "probably all Roman Catholics and a majority of Protestants".[1] As examples of biblical myths, Every cites the creation account in Genesis 1 and 2 and the story of Eve's temptation.[1] A number of modern Christian writers, such as C.S. Lewis, have described elements of Christianity, particularly the story of Christ, as "true myth".

WindMaker Windmaker is an ambient weather widget that applies the current wind conditions to (almost) any Web site. Visitors are invited to submit a post code and a Web address. Windmaker uses the post code to fetch live wind conditions for that locale.