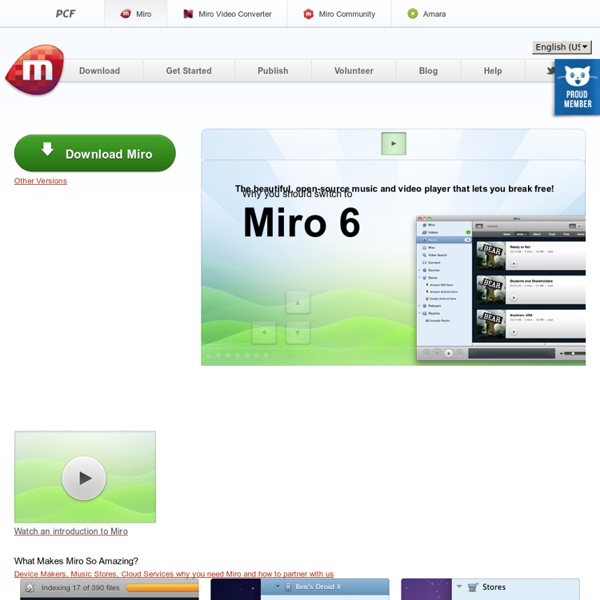 What Makes Miro So Amazing? Device Makers, Music Stores, Cloud Services why you need Miro and how to partner with us Works with your current music library It's very easy to switch from iTunes to Miro -- without any copying. Just point Miro to your music and video folders and those files will appear. If you don't like Miro (impossible!)

Latitudes and Longitudes (2011) Most of the tracking for this record took place over two cold days in early March of 2011 in a warehouse nestled between Cleveland's Ohio City and Gordon Square districts. We tracked 8 songs the first day and another 4 the next (2 didn't make the record). Almost all of the bass, guitars and drums were tracked live, together, in a room with a loud and mildly hilarious gospel choir stirring next door. Vocals and overdubs were completed sporadically throughout the next two months. Joe and Josh came and played horns on "The Weight & the Waiting", Laine sang on "January & Seven", and a bunch of our friends came in and did gang vocals and drank too many beers and got us sidetracked.

Why Linux is better PDFBEAR is founded by the team behind WhyLinuxIsBetter.net, which brings tons of experience in user conversion tools. We have decided to change our focus to helping and improving how our users convert files on all platforms including Linux. About WhyLinuxIsBetter.net Inkscape Inkscape at the Libre Graphics Meeting April 12, 2014 The Inkscape project mustered nine developers, translators and document writers for a productive meeting. TextWrangler TextWrangler TextWrangler is an all-purpose text and code editor for Mac OS X, based on the same award-winning technology as BBEdit, our leading professional HTML and text editor. We will be eventually retiring TextWrangler from our product line, and so we encourage anyone interested in TextWrangler to download and use BBEdit instead. We’ve put together a handy chart comparing BBEdit and TextWrangler, to help you out. Should I upgrade to BBEdit?

Paper Brigade Grey Flag by Paper Brigade supported by Evan Moreau Audio Editing Software. Sound, Music, Voice & Mp3 Editor Easy-to-use, professionalaudio and music editor. This audio editing software is a full-featured professional audio and music editor for Windows and Mac. It lets you record and edit music, voice and other audio recordings. When editing audio files, you can cut, copy and paste parts of recordings, and then add effects like echo, amplification and noise reduction. On Moving and Standing Still Immediate download of 12-track album in the high-quality format of your choice (MP3, FLAC, and more). Paying supporters also get unlimited mobile access using the free Bandcamp listening app. name your price Buy CD or Tape about This is a full length that I self-released in April of 2010. It is 12 folk-pop songs about interactions between people and their community, wavering relationships, and growing up without giving up.

does bittorrents too. Great but a bit slow. by markbillson May 7