DERI Pipes. Index. Just in Case – Saving Your Yahoo Pipes… Yahoo is laying off again, so just in case, if you’re a user of Yahoo Pipes, it may be worth exporting the “source code” of your pipes or any pipes that you make frequent use of in case the Yahoo Pipes service gets cut. Why? Well, a little known fact about Yahoo pipes is that you can get hold of a JSON representation from a pipe that describes how the pipe is constructed… …and some time ago, Greg Gaughan started working on a script that allows you to “compile” these descriptions of your Yahoo Pipes into Python programming code that can be run as a standalone programme on your own server: Pipe2Py. (Greg also did a demo that allowed Pipes to be “migrated” to a version of Pipe2Py running on Google App Engine.) Yahoo Pipes Code Generator (Python): Pipe2Py.

Wouldn’t it be nice if you coud use Yahoo Pipes as a visual editor for generating your own feed powered applications running on your own server? 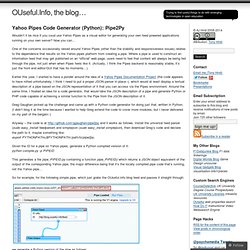 Now you can… One of the concerns occasionally raised around Yahoo Pipes (other than the stability and responsiveness issues) relates to the dependence that results on the Yahoo pipes platform from creating a pipe.