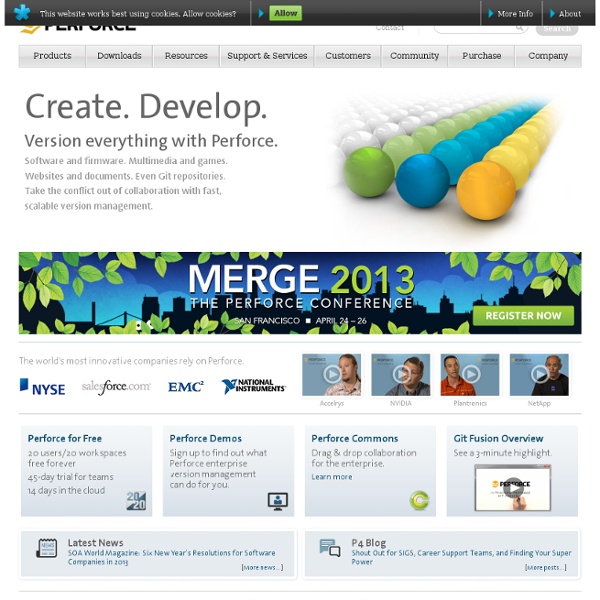 The Apache Cassandra Project Trac Git - Fast Version Control System Apache Hadoop! Flying Meat: FlyStash FlyStash & Boomerang FlyStash is a lightweight cgi script written in python that acts as a very simple wiki. While it doesn't support nearly as many features as most wikis, it does have a couple of redeeming qualities. It's very simple to install and use, and it works with Boomerang as a document store. Boomerang is a Mac desktop application which connects to FlyStash servers to retrieve, edit, and synchronize pages. FlyStash and Boomerang are very much alpha products. So whatever you do don't rely on these applications to store important information. Requirements: Mac OS X 10.3 or later. Download: Boomerang beta 1. How to install FlyStash on Mac OS X: To run FlyStash alongside Mac OS X's default install of Apache, we've supplied some quick commands you can execute from the Terminal.app (located in the /Applications/Utilities folder) to get up and running. Ok, so with that out of the way open up the Terminal and past in these commands to install FlyStash: Advanced Stuff

Windows Domain Authentication | Subversionary Some of this information was first posted to the subversion users mailing list by Michael Kelley and can be read here. Please feel free to add to or correct this information. I have configured an Apache 2.0.52 server for Subversion 1.1.1 running Windows 2000 Server SP4 as a domain member server. Authentication I'm using the modified mod_auth_sspi module from instead of the module distributed with Apache. My httpd.conf file contains this for my repository location: <Location "/svn"> dav svn SVNParentPath "d:/svndav/repository" # our user authentication policy AuthName "SVN Server" AuthType SSPI SSPIAuth On SSPIAuthoritative On SSPIDomain MYDOMAINNAME #SSPIOfferBasic on #let non-IE clients authenticate #SSPIOmitDomain On # keep domain name in userid string # passed down to mod_authz_svn #Require valid-user # A Require directive may? Be sure that you have also loaded the appropriate modules in the LoadModule section: Authorization

Painless Bug Tracking Painless Bug Tracking by Joel Spolsky Wednesday, November 08, 2000 TRS-80 Level-I BASIC could only store two string variables, A$ and B$. Similarly, I was born with only two bug-storing-slots in my brain. Keeping a database of bugs is one of the hallmarks of a good software team. If I can bend your ear a moment, I'd like to explain a pretty painless way to do bug tracking, in the spirit of my previous articles on painless schedules and painless specs. First of all, you need a real database. Let's follow a bug around, for the purpose of illustration, from the moment it's born until someone finally puts it out of its misery. Here's what happened. Mikey the Programmer is hacking away on the new FTP client feature of his groovy Macintosh software. Bad things happen when you don't reuse code, Mikey. Later that week, Jill the Very, Very Good Tester is banging away at the code, rolling her forehead back and forth on the keyboard or some equally cruel test. Jill squints at the list of repro steps.

Chapter 3. Setting Up A Server To use TortoiseSVN (or any other Subversion client), you need a place where your repositories are located. You can either store your repositories locally and access them using the protocol or you can place them on a server and access them with the or protocols. The two server protocols can also be encrypted. You use or svn+ or you can use with SASL. If you are using a public hosting service such as Google Code or your server has already been setup by someone else then there is nothing else you need to do. Move along to Chapter 4, Daily Use Guide. If you don't have a server and you work alone, or if you are just evaluating Subversion and TortoiseSVN in isolation, then local repositories are probably your best choice. If you were thinking about setting up a multi-user repository on a network share, think again. You can always find the latest links on the Subversion website. You can find further How To guides on the TortoiseSVN website.

60 Inspiring Examples of Twitter in the Classroom Social media offers some great opportunities for learning in the classroom, bringing together the ability to collaborate, access worldwide resources, and find new and interesting ways to communicate in one easily accessible place. Teachers and educators around the world have found innovative ways to use Twitter as a teaching tool, and we’ve shared many of these great ideas here with you. Read on, and we’ll explore 60 inspiring ways that teachers and students can put Twitter to work in the classroom. Communication Twitter makes staying in touch and sharing announcements super simple and even fun. Twitter as a bulletin board: Jim Newman at Northern Illinois University uses Twitter as a bulletin board for his class, letting students know about last minute news like canceled classes. Organization Twitter’s hashtags and other tools share a great way to organize information for your classroom. Resources Use these ideas to take advantage of the vast resources that Twitter has to offer.