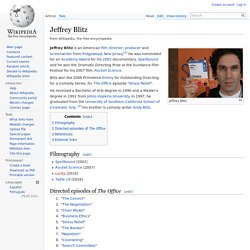 In 1997, he graduated from the University of Southern California School of Cinematic Arts. [2] His brother is comedy writer Andy Blitz. Pirates of Silicon Valley. Plot[edit] The earliest flashback is in 1971 and takes place on the U.C. 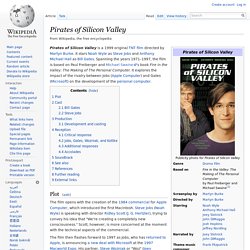 Berkeley campus during the period of the student anti-war movements. Jobs and Woz are shown caught on the campus during a riot between students and police. They flee and after finding safety, Jobs states to Woz, "Those guys think they're revolutionaries. They're not revolutionaries, we are. " Insult comedy. Publicity photo of Don Rickles, a well-regarded insult comedian, in 1973. 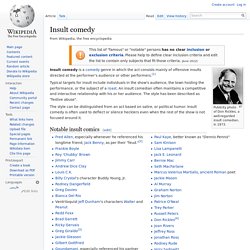 Insult comedy is a comedy genre in which the act consists mainly of offensive insults directed at the performer's audience or other performers.[1] The style can be distinguished from an act based on satire, or political humor. Studio system. Category:American film studios. This category contains articles about American film studios. 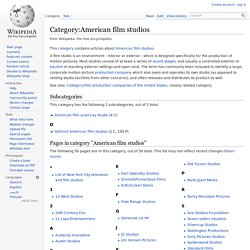 A film studio is an environment - interior or exterior - which is designed specifically for the production of motion pictures. Most studios consist of at least a series of sound stages, and usually a controlled exterior or backlot of standing exterior settings and open land. The term has commonly been misused to identify a large, corporate motion picture production company which also owns and operates its own studio (as opposed to renting studio facilities from other concerns), and often releases and distributes its product as well. Carolco Pictures. History[edit] Early years[edit] The company was founded through the partnership of two film investors, Mario Kassar and Andrew Vajna. 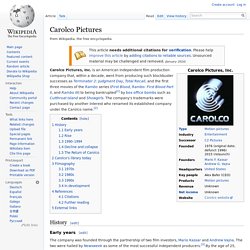 The two were hailed by Newsweek as some of the most successful independent producers.[3] By the age of 25, Vajna went from wig-maker to the owner of two Hong Kong theaters. Then, Vajna ventured into the production and distribution of feature films. One of Vajna's early productions was a 1973 martial-arts film entitled The Deadly China Doll which made $3.7 million worldwide from a $100,000 budget. Their goal was to focus on film sales; eventually it went into financing low-budget films. Category:Defunct American film studios. Orion Pictures. Shaw Brothers Studio. Shaw Brothers (HK) Ltd. 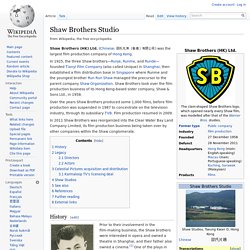 (Chinese: 邵氏兄弟（香港）有限公司) was the largest film production company of Hong Kong. In 1925, the three Shaw brothers—Runje, Runme, and Runde—founded Tianyi Film Company (also called Unique) in Shanghai, then established a film distribution base in Singapore where Runme and the youngest brother Run Run Shaw managed the precursor to the parent company Shaw Organization. Shaw Brothers took over the film production business of its Hong Kong-based sister company, Shaw & Sons Ltd., in 1958. Over the years Shaw Brothers produced some 1,000 films, before film production was suspended in 1987 to concentrate on the television industry, through its subsidiary TVB. Film producer. Film producers prepare and then supervise the making of a film before presenting the product to a financing entity or a film distributor.[1] They might be employed by a production company or be independent, yet either way they help the creative people as well as the accounting personnel.[2][3][4][5] The average Hollywood film made in 2013 had just over 10 producers credits (3.2 producers, 4.4 executive producers, 1.2 co-producers, 0.8 associate producers and 0.5 other types of producer).[6] Responsibilities[edit] Development (film rights)[edit] Pre-production[edit] Unless the film is supposed to be based on an original script, the producer has to find an appropriate screenwriter.[12][13] If an existing script is considered flawed, they are able to order a new version or make the decision to hire a script doctor.[14][15][16] The producer also has the final say on which film director gets hired.[17][18] In some cases they also have the last word when it comes to casting questions.[19] 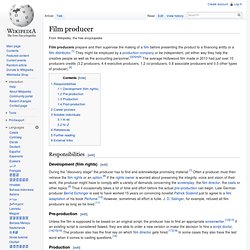 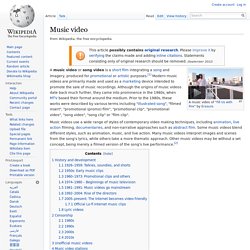 Some music videos blend different styles, such as animation, music, and live action. Many music videos interpret images and scenes from the song's lyrics, while others take a more thematic approach. Other music videos may be without a set concept, being merely a filmed version of the song's live performance.[2] §History and development[edit]

Category:Music videos. Schüfftan process. Introduction[edit] Schüfftan placed a plate of glass at a 45-degree angle between the camera and the miniature buildings. 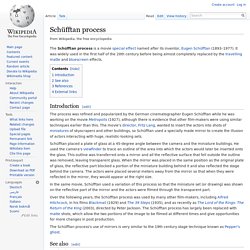 He used the camera's viewfinder to trace an outline of the area into which the actors would later be inserted onto the glass. This outline was transferred onto a mirror and all the reflective surface that fell outside the outline was removed, leaving transparent glass. When the mirror was placed in the same position as the original plate of glass, the reflective part blocked a portion of the miniature building behind it and also reflected the stage behind the camera. The actors were placed several meters away from the mirror so that when they were reflected in the mirror, they would appear at the right size.

Sight & Sound. Category:Visual effects. Visual effects. In filmmaking, visual effects (abbreviated VFX) are the processes by which imagery is created and/or manipulated outside the context of a live action shot. 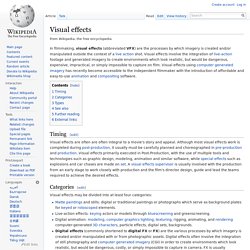 Visual effects involve the integration of live-action footage and generated imagery to create environments which look realistic, but would be dangerous, expensive, impractical, or simply impossible to capture on film. Visual effects using computer generated imagery has recently become accessible to the independent filmmaker with the introduction of affordable and easy-to-use animation and compositing software. Commedia all'italiana. I soliti ignoti (1958), the first film in the ranked as the first of the Commedia all'italiana Commedia all'italiana (i.e. «Comedy in the Italian way») or Italian-style comedy is an Italian film genre. It is widely considered to have started with Mario Monicelli's I soliti ignoti (Big Deal on Madonna Street) in 1958 and derives its name from the title of Pietro Germi's Divorzio all'italiana (Divorce Italian Style, 1961). Rather than a specific genre, the term indicates a period in which the Italian film industry was producing mainly brilliant comedies, with some common traits like satire of manners and a prevailing middle-class setting, often characterized by a substantial background of sadness that would dilute the comic contents.

What is the Commedia all'Italiana[edit] As he said in an interview with the director Mario Monicelli, the Italian comedy (Commedia all'italiana) is something very simple, which is closely tied to popular culture of Italy. Reel Bad Arabs. Reel Bad Arabs: How Hollywood Vilifies a People is a documentary film directed by Sut Jhally and produced by Media Education Foundation in 2006.

This film is an extension of the book of that name by Jack Shaheen which also analyzes how Hollywood corrupts or manipulates the image of Arabs. This documentary argues that the slander of Arabs in American filmmaking has existed since the early days of the silent cinema and is present in the biggest Hollywood blockbusters today. Jack Shaheen analyzes a long series of "demeaning" images of Arabs through his presentation of various scenes from different American movies which he has studied.

He argues that this image is characterized by showing Arabs either as bandits or as a savage, nomadic race, or shows Arab women as shallow belly dancers serving evil, naïve, and greedy Arab sheiks. Cinematography. Cinematography (from Greek: κίνημα, kinema "movements" and γράφειν, graphein "to record") is the science or art of motion picture photography by recording light or other electromagnetic radiation, either electronically by means of an image sensor, or chemically by means of a light-sensitive material such as film stock.[1] Cinematography is employed in many fields of science and business as well as its more direct uses for recreational purposes and mass communication.