Mappe, Game Of Thrones e Programma Del Sonno. The Maps We Wandered Into As Kids. If I ruled the world, or at least a publishing company, all books would contain as much supplementary information as possible. 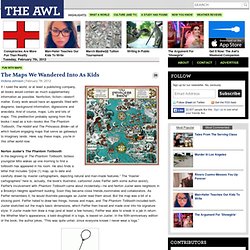 Nonfiction, fiction—doesn't matter. Every work would have an appendix filled with diagrams, background information, digressions and anecdata. And of course, maps. Lots and lots of maps. This predilection probably sprang from the books I read as a kid—books like The Phantom Tollbooth, The Hobbit and The Princesss Bride—all of which feature engaging maps that serve as gateways to imaginary lands. Norton Juster's The Phantom Tollbooth In the beginning of The Phantom Tollbooth, listless youngster Milo wakes up one morning to find a tollbooth has appeared in his room. As a map: It's a perfect example of where hand-drawn aesthetics work best in maps—across a small area mapped specifically for visitors, as the exaggerated landmarks are given weight over exacting spatial accuracy.

A.A. L. As a map: A straightforward map if ever there was. J.R.R. Legendary Lands: Umberto Eco on the Greatest Maps of Imaginary Places and Why They Appeal to Us. By Maria Popova “Often the object of a desire, when desire is transformed into hope, becomes more real than reality itself.” 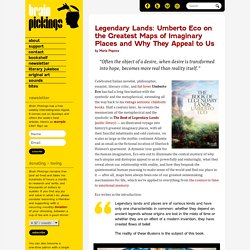 Celebrated Italian novelist, philosopher, essayist, literary critic, and list-lover Umberto Eco has had a long fascination with the symbolic and the metaphorical, extending all the way back to his vintage semiotic children’s books. Half a century later, he revisits the mesmerism of the metaphorical and the symbolic in The Book of Legendary Lands (public library) — an illustrated voyage into history’s greatest imaginary places, with all their fanciful inhabitants and odd customs, on scales as large as the mythic continent Atlantis and as small as the fictional location of Sherlock Holmes’s apartment. Eco writes in the introduction: Saint-Sever World Map, from the 'Saint-Sever Beatus' (1086), Paris, Bibliothèque nationale de France T and O map, Bartholomaeus Angelicus, 'Le livre des propriétés des choses' (1392)

Mercator's Meru. The search for a terrestial Eden or Paradise has forever eluded the grasp of most mortals yet some have succeeded or come very close to achieving this quest -or at least acquiring solid information about it. 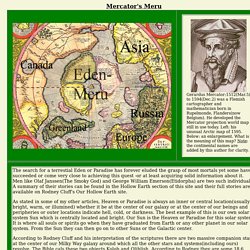 Men like Olaf Janssen(The Smoky God) and George William Emerson(Etidorpha) are two such individuals. A summary of their stories can be found in the Hollow Earth section of this site and their full stories are available on Rodney Cluff's Our Hollow Earth site. As stated in some of my other articles, Heaven or Paradise is always an inner or central location(usually bright, warm, or illumined) whether it be at the center of our galaxy or at the center of our beings and peripheries or outer locations indicate hell, cold, or darkness.

The best example of this is our own solar system Sun which is centrally located and bright. A Guide for the Perplexed: Mapping the Meaning of Life and the Four Levels of Being. By Maria Popova How to harness the uniquely human power of “consciousness recoiling upon itself.” 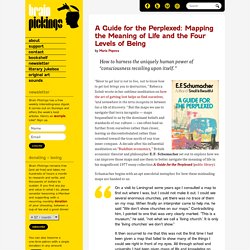 “Never to get lost is not to live, not to know how to get lost brings you to destruction,” Rebecca Solnit wrote in her sublime meditation on how the art of getting lost helps us find ourselves, “and somewhere in the terra incognita in between lies a life of discovery.” But the maps we use to navigate that terra incognita — maps bequeathed to us by the dominant beliefs and standards of our culture — can often lead us further from ourselves rather than closer, leaving us discombobulated rather than oriented toward the true north of our true inner compass. A decade after his influential meditation on “Buddhist economics,” British economic theorist and philosopher E.F.

Schumacher set out to explore how we can improve those maps and use them to better navigate the meaning of life in his magnificent 1977 essay collection A Guide for the Perplexed (public library). We cannot say: “Hold it! 22 Perfect Maps Of Places That Don't Actually Exist.