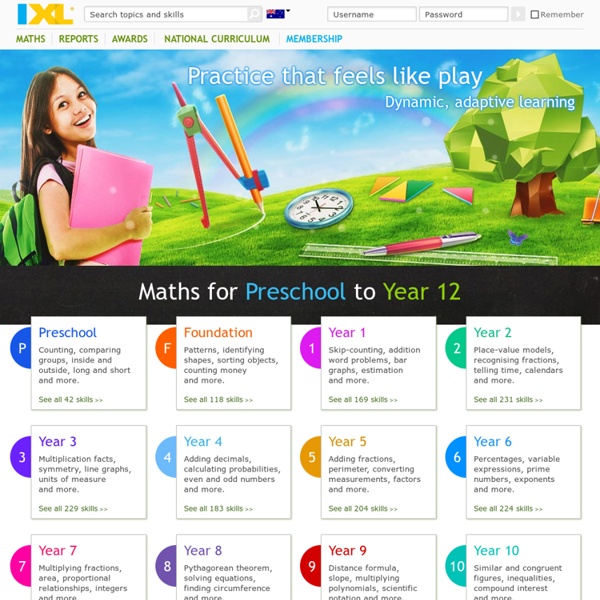 Mathalicious The World Is an Interesting Place. Math Class Should Be, Too. At Mathalicious, we think the world is an interesting place full of interesting questions. Do people with small feet pay too much for shoes? The Math Forum - Ask Dr. Math Ask Dr. Math® Thank you for your interest in Ask Dr. Math. We are no longer accepting new questions for this service. Kindergarten Time Worksheets << Math Worksheet Wizard Reception Year / Kindergarten Time Worksheets At the Kindergarten / Reception level, children begin to read o'clock time. To help them, the worksheets here provide practice in reading analog clocks, drawing hands to match digital times, and matching analog to digital times for whole hours. Note: These worksheets teach time to the hour only.

Magnificent Measurement Gather students in a large group. Ask them to name the different time frames within a day—morning, afternoon, and night. Have students share activities they participate in during the morning time (for example, wake up, eat breakfast, and brush teeth), afternoon (for example, eat lunch, play outside, and go home from school), and night (for example, eat supper, do homework, and watch TV). If students have difficulty, ask such guiding questions as “When do you eat breakfast?” Love, Betrayal, Calculus: All on the "Math Warriors" Web Series "Math Warriors" is a locally produced dramatic web series whose third season launches Monday. Its creator, Kristina Harris -- she has a Ph.D. in microbial biochemistry and has taught at both New York and Columbia Universities -- thinks of the series as "The Big Bang" meets "The Office," if on a much tighter budget. "Math Warriors" web series There are clashing egos, a conventional Asian nerd and a platinum blonde, furiously scribbled formulas and, of course, a quest to conquer the mathematical universe.

Home Page Teachers Primary Pupils Secondary Students Events and PD "It gave me some good ideas to use in the classroom and ... a link that I can get all of the activities from." Multiplication Worksheets We have multiplication sheets for timed tests or extra practice, as well as flashcards and games. Includes Multiplication Flashcards, Multiplication Bingo, Multiplication Tables, Multiplication I Have - Who has, and lots more! To see the Common Core Standards associated with each multiplication worksheet, select the apple core logo ( ) below the worksheet's description. Games

Horus Eye Fractions The ancient Egyptian system of measures provides another example of number signs conceived as a coherent system. In the so- called “Horus-eye fractions”1, the designer of a numerical sequence linked its members also into a unified whole derived from a myth, just as in the series of numerals for the powers of ten. Gay Robins and Charles Shute describe this series of measures in their book on “The Rhind Mathematical Papyrus”, an ancient Egyptian mathematics text for apprentice scribes : “The common unit of volume, used for measuring amounts of grain or flour, was the hekat, approximately equal to 4.8 litres or just over a [British] gallon. (...) For smaller amounts, the hekat could be progressively halved to give /2, /4, /8, /16, /32, and /64 fractions. (...)

Math The Mathematics area of study is designed to build a strong foundation in mathematical understanding and procedural skills, as well as to prepare students to meet the standards for 21st Century critical thinking and problem solving. The Mathematics curriculum includes the areas of ratios and proportional relationships, the number system, expressions and equations, geometry, and statistics and probability. The courses are aligned with the Common Core State Standards and designed to cover the equivalent of a year-long, traditional school curriculum. The main goals of the Common Core State Standards are to establish the knowledge and skills necessary for college and career readiness among high school graduates, and to continually develop these skill sets at each grade level.

I feel that www.ixl.com is simply the BEST online mathematics resource that I have found. I subscribe to it for my 5 year old and my 11 year old and they are both functioning 2-3 grade levels ahead of their current, standard grade levels. I highly recommend it for classroom use for grades 4th through 8th and for use with your own children to accelerate and/or maintain their math skills. by drsinasoul May 26