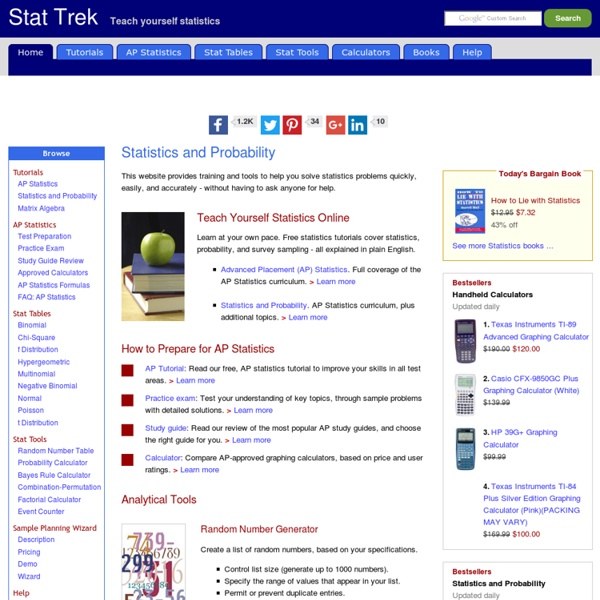 This web site provides training and tools to help you solve statistics problems quickly, easily, and accurately - without having to ask anyone for help. How to Prepare for AP Statistics Analytical Tools Probability Calculators We wish to express our appreciation to those who assisted in the development of this web site. We are particularly grateful to the following folks.

Braess’ Paradox – or Why improving something can make it worse On Earth Day in 1990 they closed New York’s 42nd Street for the parade[1] and in 1999 one of the three main traffic tunnels in South Korea’s capital city was shut down for maintenance[2]. Bizarrely, despite both routes being heavily used for traffic, the result was not the predicted chaos and jams, instead the traffic flows improved in both cases. Inspired by their experience, Seoul’s city planners subsequently demolished a motorway leading into the heart of the city and experienced exactly the same strange result, with the added benefit of creating a 5-mile long, 1,000 acre park for the local inhabitants[3]. It is counter-intuitive that you can improve commuters’ travel times by reducing route options: after all planners normally want to improve things by adding routes. This paradox was first explored by Dietric Braess in 1968[4,5] where he explored the maths behind how adding route choices to a network can sometimes make everyone’s travel time worse.

Against All Odds: Inside Statistics 1. What Is Statistics? Statistics is the art and science of gathering, organizing, analyzing and drawing conclusions from data. And without rudimentary knowledge of how it works, people can't make informed judgments and evaluations of a wide variety of things encountered in daily life. Go to this unit. Bayesian Links Bayes and Bayes Theorem Bayesian Calculators Links to Experiments on Bayes Theorem Experiment on the Cab Problem Links to Experiments on Decision Making Experiment on Decision Making-Choose between gambles and perhaps win money.

Statistics "Thank you and thank you again for providing a complete, well-structured, and easy-to-understand online resource. Every other website or snobbish research paper has not deigned to explain things in words consisting of less than four syllables. I was tossed to and fro like a man holding on to a frail plank that he calls his determination until I came across your electronic textbook...You have cleared the air for me. You have enlightened.

Csurvey Software CSurvey 2.0 was modified in May, 2008 by Muhammad Farid and Ralph R. Frerichs and is now available for those using Windows. The program was employed in EPI 418 Rapid Surveys, and is available for free to others interested in two-stage cluster surveys. Manual for CSurvey 2.0 (English) Leaner Fourier Transforms By Helen Knight, MIT New algorithm can separate signals into their individual frequencies using a minimal number of samples. The fast Fourier transform, one of the most important algorithms of the 20th century, revolutionized signal processing. The algorithm allowed computers to quickly perform Fourier transforms — fundamental operations that separate signals into their individual frequencies — leading to developments in audio and video engineering and digital data compression. But ever since its development in the 1960s, computer scientists have been searching for an algorithm to better it. Last year MIT researchers Piotr Indyk and Dina Katabi did just that, unveiling an algorithm that in some circumstances can perform Fourier transforms hundreds of times more quickly than the fast Fourier transform (FFT).

Bayesian Calculator How to use the Calculator 1. To use this program for first time, work through the following example. Suppose that 5% of people of your age and heredity have cancer. Suppose that a blood test has been developed that correctly gives a positive test result in 80% of people with cancer, and gives a false positive in 20% of the cases of people without cancer. Suppose you take the test, and it is positive. EpiCentre Analysis of time-to-event (survival) data course When : 10 - 14 March 2014 Where : Massey University, Palmerston North. A five day intermediate to advanced course on the analysis of time-to-event (survival) data. General statistical concepts and methods discussed in this course include survival and hazard functions, Kaplan-Meier graphs, log-rank and related tests, the Cox proportional hazards model, extended Cox models for time-varying covariates, parametric models, and frailty models. more OIE Collaborating Centre

Euclid's Elements, Introduction Euclid's Elements form one of the most beautiful and influential works of science in the history of humankind. Its beauty lies in its logical development of geometry and other branches of mathematics. It has influenced all branches of science but none so much as mathematics and the exact sciences. The Elements have been studied 24 centuries in many languages starting, of course, in the original Greek, then in Arabic, Latin, and many modern languages. I'm creating this version of Euclid's Elements for a couple of reasons. The main one is to rekindle an interest in the Elements, and the web is a great way to do that. RWM103: Geometry Making sure that objects are of equal size is important in life. Whether pieces of furniture, automobiles, or just pieces of a candy bar shared between siblings, we often have to make sure objects are the same size and shape. Have you ever had to prove something to a child? Sometimes, the best way to do that is to give the child a series of logical statements and then show how it all summarizes to one conclusion.

Twitter is closer to emulate a Neural Network than Facebook When we think of Twitter and the innovation behind it, the first thing we all think is 140. 140 characters is without a doubt an amazing innovation that Twitter introduced which makes communication flow faster, forces twitters to summarize a piece of news or information, or an idea or an opinion and allows followers to get information or an idea faster as well. Also, after the introduction of url shorteners (tinyurl,com originally and many others later on such as bit.ly) an emergent property of Twitter came to life: the linked web. Any blog post or news article out there could be potentially linked multiple times in Twitter with quick summaries and opinions. Other emerging properties or elements in Twitter are:.

Zipf, Power-law, Pareto - a ranking tutorial Lada A. Adamic Information Dynamics Lab Information Dynamics Lab, HP Labs Palo Alto, CA 94304 A line appears on a log-log plot. One hears shouts of "Zipf!" Online Geometry Course – Free Geometry Lessons Course Description This free online Geometry course provides a comprehensive introduction to geometrical methods and techniques, covering angles, triangles, quadrilaterals, polygons, and more. It is ideal for complementing face-to-face classes, as a study guide, or for those who would like to refresh their knowledge of mathematics. To qualify for your official ALISON Diploma, Certificate or PDF you must study and complete all modules and score 80% or more in each of the course assessments.