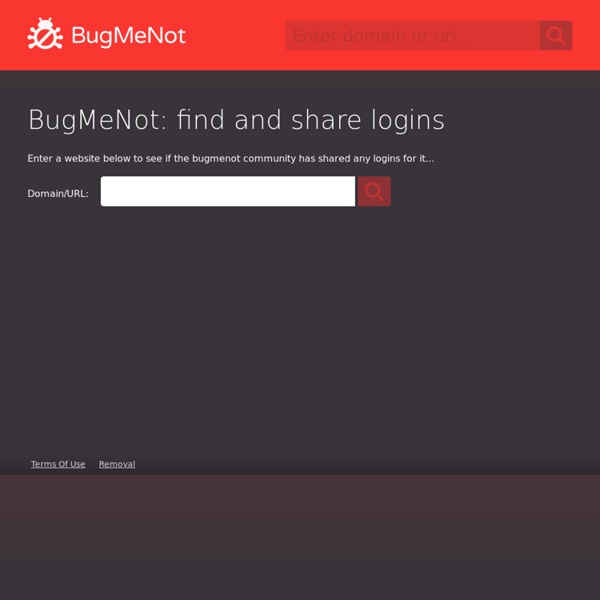 bugmenot.com Bugmenot.com - login with these free web passwords to bypass compulsory registration Menu Most Popular Real-time local Twitter trends Trendsmap let's you see what people are talking about in your area...

Top 15 Open Source/Free Security/Hacking Tools 1. Nmap Nmap (“Network Mapper”) is a free and open source (license) utility for network discovery and security auditing. Search Engine Watch: Invisible Web & Databases There's lots of helpful information locked away in databases that can never be indexed by search engines. The services below let you search this "invisible web" or "deep web." InvisibleWeb.com From Intelliseek, the makers of the BullsEye meta search software, InvisibleWeb.com catalogs searchable resources across the web. Also used for the Lycos Invisible Web service, below. Lycos Invisible Web Catalog Produced in partnership with Intelliseek, this search engine gives you access to all sorts of online databases. Direct Search

index #f0f0f0 #ebe3e2 #f2decb #bdb3b3 'The Rescuers' Topless Scene Claim: The photographic image of a topless woman appears in the background of a scene in The Rescuers. Origins: On 8 January 1999, Disney announced a recall of the home video version of their 1977 animated feature The Rescuers because it contained an "objectionable background image." That image was one which appeared in a scene approximately into the film: as rodent heroes Bianca and Bernard fly through the city in a sardine box strapped to the back of Orville, proprietor of Albatross Air Charter Service, the photographic image of a topless woman can be seen at the window of a building in the background in two different non-consecutive frames, first in the bottom left corner, then at the top center portion of the frame:

Detect How can you detect if your computer has been violated and infected with DNS Changer? An industry wide team has developed easy “are you infected” web sites. They are a quick way to determine if you are infected with DNS Changer. Each site is designed for any normal computer user to browse to a link, follow the instructions, and see if they might be infected. Free Password Crackers A password cracker program, often called a password recovery tool or a password unlocker/reset tool, is a software program used to "crack" a password, either by discovering the password outright, bypassing the encryption by removing the password, or bypassing the need for a password by changing the way the program or file works. If you've lost your password to something like Windows or an encrypted file, and the normal means to change the password won't work, a password cracker program might be able to help. Fully functional, completely free password crackers do exist alongside the many premium password crackers that you might find doing a quick search.

The Ultimate Guide to the Invisible Web Search engines are, in a sense, the heartbeat of the internet; “googling” has become a part of everyday speech and is even recognized by Merriam-Webster as a grammatically correct verb. It’s a common misconception, however, that googling a search term will reveal every site out there that addresses your search. In fact, typical search engines like Google, Yahoo, or Bing actually access only a tiny fraction – estimated at 0.03% – of the internet. www.technixupdate Advertisement Although it quite late now, but the April fool day has not ended and moreover I just want to blog about these computer pranks which you can play on your friend computer any day you want to. We will tell you some of the hilarious computer tricks with which you can annoy your friend any time you want irrespective of any april fool day. All these are portable so they do not require any installation on the target computer and you can remove them anytime just by deleting the program exe.