100 Diagrams That Changed the World 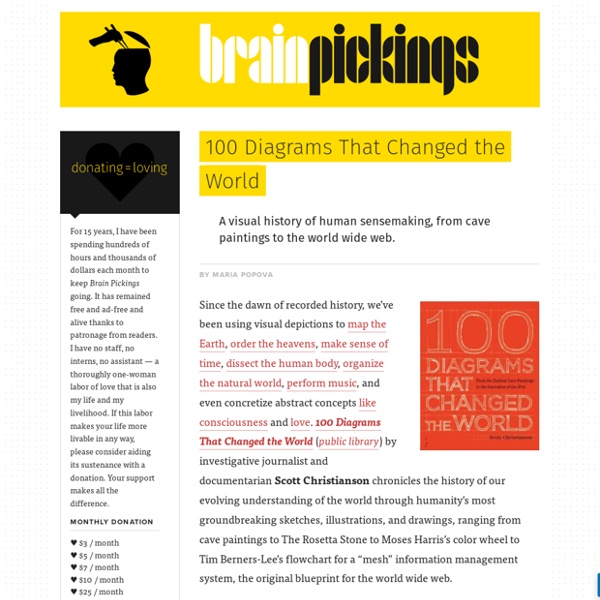 Since the dawn of recorded history, we’ve been using visual depictions to map the Earth, order the heavens, make sense of time, dissect the human body, organize the natural world, perform music, and even concretize abstract concepts like consciousness and love. 100 Diagrams That Changed the World (public library) by investigative journalist and documentarian Scott Christianson chronicles the history of our evolving understanding of the world through humanity’s most groundbreaking sketches, illustrations, and drawings, ranging from cave paintings to The Rosetta Stone to Moses Harris’s color wheel to Tim Berners-Lee’s flowchart for a “mesh” information management system, the original blueprint for the world wide web. It appears that no great diagram is solely authored by its creator. Most of those described here were the culmination of centuries of accumulated knowledge. Most arose from collaboration (and oftentimes in competition) with others. Christianson offers a definition:

10 Lame Documents that Would Be Better as Infographics Infographics, it seems, have taken the media by storm. Because they are visually attractive, eye-catching, accessible, fun, and–if done well–quickly and effectively informative, people are drawn to them. And businesses have caught wind of this. We see infographics in magazines, on blogs, and even on corporate “About Us” pages in order to sell news, ideas, and products. But what if infographics were used for more “common” documents–the stuff we use day-to-day? Would they make our lives easier?

David Byrne’s Hand-Drawn Pencil Diagrams of the Human Condition by Maria Popova “Science’s job is to map our ignorance.” David Byrne may have authored both one of last year’s best albums and best music books, but he is also one of the sharpest thinkers of our time and a kind of visual philosopher. About a decade ago, Byrne began making “mental maps of imaginary territory” in a little notebook based on self-directed instructions to draw anything from a Venn diagram about relationships to an evolutionary tree of pleasure — part Wendy MacNaughton, part Julian Hibbard, yet wholly unlike anything else. In 2006, Byrne released Arboretum (UK; public library), a collection of these thoughtful, funny, cynical, poetic, and altogether brilliant pencil sketches — some very abstract, some very concrete — drawn in the style of evolutionary diagrams and mapping everything from the roots of philosophy to the tangles of romantic destiny to the ecosystem of the performing arts. Möbius Structure of Relationships

This site publishes high-touch, time-intensive data visualizations (and has a business that sustains it) Over 7,000 artists played in the New York City area in 2013. Only 21 of those later made it, really made it, headlining at a venue with an over 3,000-person capacity — among them, bigger names like Chance the Rapper, X Ambassadors, Sam Smith, and Sylvan Esso. I learned this sort of random but fascinating tidbit from a data visualization titled “The Unlikely Odds of Making it Big,” from the site The Pudding.

Macron condemned the rise of nationalism in front of Trump and Putin, warning that 'old demons are reawakening' PARIS (Reuters) - French President Emmanuel Macron used an address to world leaders gathered in Paris for Armistice commemorations on Sunday to send a stern message about the dangers of nationalism, calling it a betrayal of moral values. With US President Donald Trump and Russian President Vladimir Putin sitting just a few feet away listening to the speech via translation earpieces, Macron denounced those who evoke nationalist sentiment to disadvantage others. "Patriotism is the exact opposite of nationalism: nationalism is a betrayal of patriotism," Macron said in a 20-minute address delivered from under the Arc de Triomphe to mark the 100th anniversary of the end of World War One. "By pursuing our own interests first, with no regard to others', we erase the very thing that a nation holds most precious, that which gives it life and makes it great: its moral values."

The Island of Knowledge: How to Live with Mystery in a Culture Obsessed with Certainty and Definitive Answers “Our human definition of ‘everything’ gives us, at best, a tiny penlight to help us with our wanderings,” Benjamen Walker offered in an episode of his excellent Theory of Everything podcast as we shared a conversation about illumination and the art of discovery. Thirty years earlier, Carl Sagan had captured this idea in his masterwork Varieties of Scientific Experience, where he asserted: “If we ever reach the point where we think we thoroughly understand who we are and where we came from, we will have failed.” This must be what Rilke, too, had at heart when he exhorted us to live the questions. And yet if there is one common denominator across the entire history of human culture, it is the insatiable hunger to know the unknowable — that is, to know everything, and to know it with certainty, which is itself the enemy of the human spirit.

We Should Be Teaching Infographics A couple decades ago or so USA Today did something monumental in the world of news: they made information much more visual. In an effort to boost readership (and sales) they did something that, at the time, seemed entirely radical: increase the size of the images to make the news much more picture-heavy. Reduce textual content, in other words, and increase visualization. The Best Data Visualization Projects of 2014 It's always tough to pick my favorite visualization projects. I mean, it's a challenge to pick and rank your favorite anything really. So much depends on what you feel like at the time, and there's a lot of good work out there. Nevertheless, I gave it a go. These are my favorites for the year, roughly in order of favorite on down and based on use of data, design, and being useful. Mostly though, my picks are based on gut.

Data visualisation: how Alberto Cairo creates a functional art It's not enough for visualisations to string the correct numbers together, they should - in the words of William Morris - be beautiful and useful. And one of the leading experts in making data beautiful is Alberto Cairo - who teaches information graphics and visualisation at the University of Miami's School of Communication. His latest book, The Functional Art, is a comprehensive guide not only to how to do it; but how to get it right, too. And, if you're interested in data visualisation, you must not only read this but absorb each of the lessons he teaches so patiently. 'A torrent of ghastly revelations': what military service taught me about America My first and only war tour took place in Afghanistan in 2010. I was a US Marine lieutenant then, a signals intelligence officer tasked with leading a platoon-size element of 80 to 90 men, spread across an area of operations the size of my home state of Connecticut, in the interception and exploitation of enemy communications. That was the official job description, anyway.

Scientists Observed Epigenetic Memories Being Passed Down For 14 Generations Scientists found how our minds affect our biology, mainly through the study of epigenetics, which is a branch of science that looks at inherited changes in phenotype (appearance) or gene expression! Scientists stopped looking at DNA as the only determinant to control human biology. Now, specialists are searching for ways to understand what controls our DNA and the search led them to the mind. The genetic instructions from our DNA are passed down through generations. Moreover, recent discoveries show that the environment we live in could change our genetics, which then continues to pass the new genetics through future generations.

A Tube map of the London Underground that's far more useful than the 'official' one - UK - News The new map, by a user called Sameboat, has been praised for being clearer than the old, 80-year old template. Unlike in the official version, different branches of the fast-expanding London Overground Network are now in different colours, handy interchanges are highlighted and the correct geographical relationship between the two stations in Bethnal Green, east London, is shown. Planned line extensions are also highlighted, meaning that the map is more likely to be 'future proof' compared to the version used by Transport for London.

Gallery · mbostock/d3 Wiki Wiki ▸ Gallery Welcome to the D3 gallery! More examples are available for forking on Observable; see D3’s profile and the visualization collection. Please share your work on Observable, or tweet us a link!