Everything Doesn't Happen For A Reason — Tim Lawrence 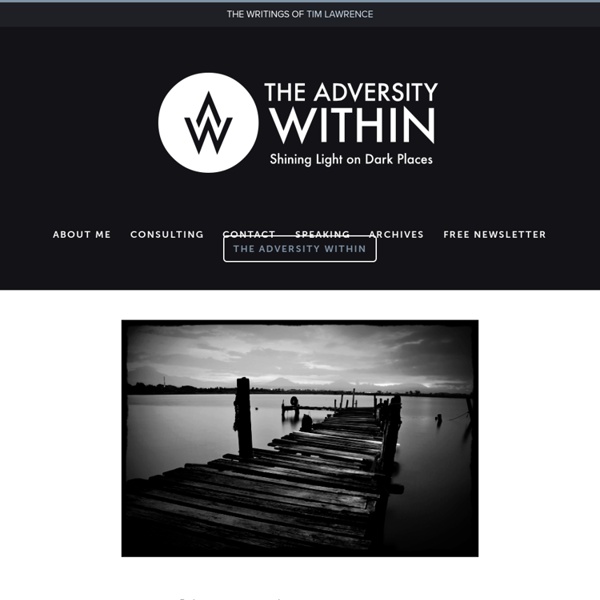 I emerge from this conversation dumbfounded. I've seen this a million times before, but it still gets me every time. I’m listening to a man tell a story. A woman he knows was in a devastating car accident; her life shattered in an instant. She now lives in a state of near-permanent pain; a paraplegic; many of her hopes stolen. He tells of how she had been a mess before the accident, but that the tragedy had engendered positive changes in her life. And then he utters the words. Everything happens for a reason. That's the kind of bullshit that destroys lives. It is amazing to me that so many of these myths persist—and that is why I share actionable tools and strategies to work with your pain in my free newsletter. You know exactly what I'm talking about. Grief is brutally painful. So I’m going to repeat a few words I’ve uttered countless times; words so powerful and honest they tear at the hubris of every jackass who participates in the debasing of the grieving: They can only be carried.

Related:  Psychology • On Being Human • Quotes

Screw Finding Your Passion Remember back when you were a kid? You would just do things. You never thought to yourself, “What are the relative merits of learning baseball versus football?” You just ran around the playground and played baseball and football. Story of My Life: How Narrative Creates Personality In Paul Murray's novel Skippy Dies, there’s a point where the main character, Howard, has an existential crisis.“‘It’s just not how I expected my life would be,'" he says. “‘What did you expect?’” a friend responds. “Howard ponders this.

Yes, Your Opinion Can Be Wrong Thursday, July 23, 2015 at 6 a.m. I have had so many conversations or email exchanges with students in the last few years wherein I anger them by indicating that simply saying, "This is my opinion" does not preclude a connected statement from being dead wrong. It still baffles me that some feel those four words somehow give them carte blanche to spout batshit oratory or prose. And it really scares me that some of those students think education that challenges their ideas is equivalent to an attack on their beliefs. How to Make Anxiety Work for You, Not Against You “Growth begins when we start to accept our own weakness.” ~Jean Vanier I got fired from my job, my boyfriend left me, and my father died in one day. In reality, my career was going super well, I didn’t have a boyfriend, and my father was amazingly healthy, but what I did have was something I call an ultra amazing imagination, where I would make up fascinating stories about things that could happen and worry about them. (Or as other people call it, general anxiety disorder.)

Why 'Things Fitting Perfectly Into Other Things' Is So Satisfying Oh! Why, hello. I didn't see you there. 10 Signs You May Be Involved With a Sex Addict, By a Sex Addict  by Brian Whitney You've been hanging out with this guy for a while and everything is great. That's what you tell people. Effort Is Not the Enemy of Compassion - Leslie Jamison My job title is medical actor, which means I play sick. I get paid by the hour. Medical students guess my maladies. I'm called a standardized patient, which means I act toward the norms set for my disorders. I'm standardized-lingo SP for short.

Edwin H. Land Don't do anything that someone else can do. Don't undertake a project unless it is manifestly important and nearly impossible. Edwin Herbert Land (May 7, 1909 – March 1, 1991) was an American scientist and inventor. Among other things, he invented inexpensive filters for polarizing light, a practical system of in-camera instant photography, and his retinex theory of color vision. Quotes[edit] We live in a world changing so rapidly that what we mean frequently by common sense is doing the thing that would have been right last year.