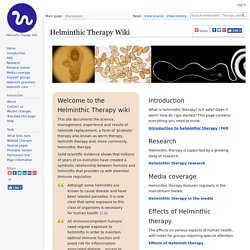 Solid scientific evidence shows that millions of years of co-evolution have created a symbiotic relationship between humans and helminths that provides us with essential immune regulation. Although some helminths are known to cause disease and have been labeled parasites, it is now clear that some exposure to this class of organisms is necessary for human health. [1] All immunocompetent humans need regular exposure to helminths in order to maintain optimal immune function and avoid risk for inflammation-associated disease… access to helminths is a basic human need. [2] This is a collaborative, crowd-sourced site administered by volunteers with no commercial interest in the therapy. Personal stories Support groups. Intro helminths scott. Microbiome composition of children infected with helminths — The American Microbiome Institute. While much has been explored regarding the microbiome’s role in nutrition and immunology, more research is needed in uncovering interactions between the host microbiome and infection as this represents a high unmet medical need. 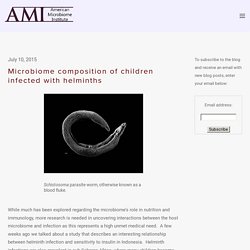 A few weeks ago we talked about a study that describes an interesting relationship between helminth infection and sensitivity to insulin in Indonesia. Helminth infections are also prevalent in sub-Saharan Africa, where many children become exposed to Schistosoma haematobium, causing schistosomes and dramatically affecting childhood health and development. Researchers from Africa sought to investigate whether there were significant differences in microbiome composition between children who were infected with S. haematobium and those who were not. Furthermore, investigators explored whether praziquantel (PZQ) – an effective agent that kills schistosome worms – has any influence on the human microbiome composition of infected patients.

Helminths suppress the immune system by modulating the gut microbiota — The American Microbiome Institute. The scientists started by showing the efficacy of a mouse helminth, Heligmosomoides polygyrus bakeri (Hpb), in reducing inflammation in mouse models of asthma. 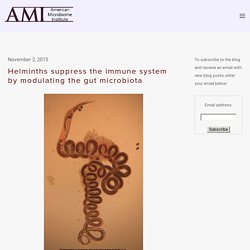 The scientists infected mice with the parasite and exposed those mice, along with non-infected control mice, to dust mites in order to elicit and immune response. The scientists observed that the Hpb mice had much lower circulating levels of specific cytokines and immune cells after exposure to dust mites than the controls. Helminths may provide therapeutic benefit to treat brain disorder — The American Microbiome Institute. We’ve recently talked about a few articles that have studied helminth infection with respect to the microbiome, and how these infections could possibly confer some therapeutic benefits. 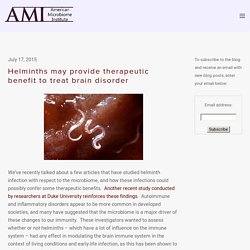 Another recent study conducted by researchers at Duke University reinforces these findings. Autoimmune and inflammatory disorders appear to be more common in developed societies, and many have suggested that the microbiome is a major driver of these changes to our immunity. These investigators wanted to assess whether or not helminths – which have a lot of influence on the immune system – had any effect in modulating the brain immune system in the context of living conditions and early-life infection, as this has been shown to result in neurodevelopment disorders. In this study, male and female rats were infected with a H. diminuta cystercircoid rat tapeworm a few weeks prior to breeding. Can hookworms fight against celiac disease? — The American Microbiome Institute. Helminths, or gut worms, are native inhabitants of our microbiome that are known to have substantial immunosuppressive effects. 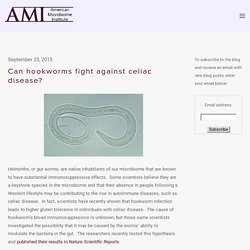 Some scientists believe they are a keystone species in the microbiome and that their absence in people following a Western lifestyle may be contributing to the rise in autoimmune diseases, such as celiac disease. In fact, scientists have recently shown that hookworm infection leads to higher gluten tolerance in individuals with celiac disease. The cause of hookworm’s broad immunosuppression is unknown, but those same scientists investigated the possibility that it may be caused by the worms’ ability to modulate the bacteria in the gut. The researchers recently tested this hypothesis and published their results in Nature Scientific Reports. First, the researchers measured the fecal microbiota of eight human subjects with celiac disease, all of whom had followed a gluten free diet for at least five years prior to the trial.

Helminths may increase sensitivity to insulin — The American Microbiome Institute. Countries that are becoming more exposed to Westernization have experienced many positive health impacts, such as decreases in infectious disease rates. 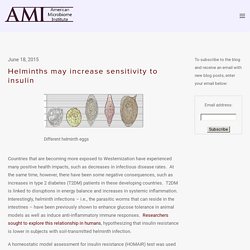 At the same time, however, there have been some negative consequences, such as increases in type 2 diabetes (T2DM) patients in these developing countries. Gut helminths harm individuals’ ability to combat some bacterial infections — The American Microbiome Institute. Gut helminths are the worms that live in the gut. 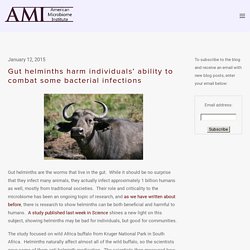 While it should be no surprise that they infect many animals, they actually infect approximately 1 billion humans as well, mostly from traditional societies. Their role and criticality to the microbiome has been an ongoing topic of research, and as we have written about before, there is research to show helminths can be both beneficial and harmful to humans. A study published last week in Science shines a new light on this subject, showing helminths may be bad for individuals, but good for communities. The study focused on wild Africa buffalo from Kruger National Park in South Africa. Helminths naturally affect almost all of the wild buffalo, so the scientists gave some of them anti-helminth medication.