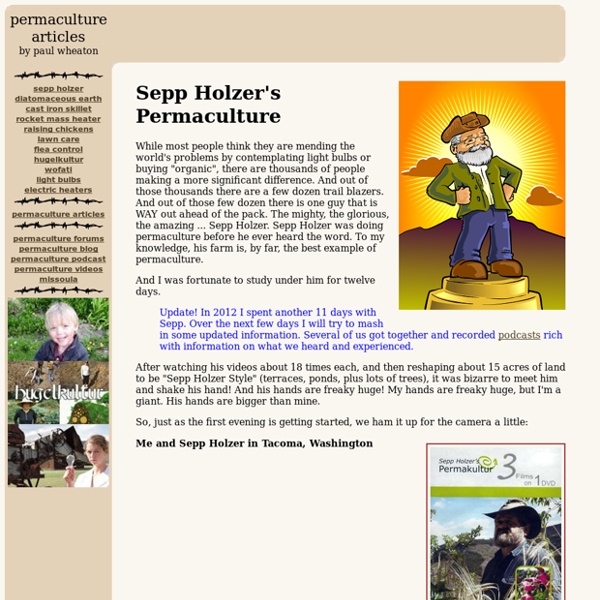 While most people think they are mending the world's problems by contemplating light bulbs or buying "organic", there are thousands of people making a more significant difference. And out of those thousands there are a few dozen trail blazers. And out of those few dozen there is one guy that is WAY out ahead of the pack. The mighty, the glorious, the amazing ... Sepp Holzer. Sepp Holzer was doing permaculture before he ever heard the word. And I was fortunate to study under him for twelve days. Update! After watching his videos about 18 times each, and then reshaping about 15 acres of land to be "Sepp Holzer Style" (terraces, ponds, plus lots of trees), it was bizarre to meet him and shake his hand! So, just as the first evening is getting started, we ham it up for the camera a little: buy at green-shopping.co.uk buy at amazon.com The Sepp Holzer 3-in-1 DVD. This is a great 45 minute DVD on general Sepp Holzer technques. buy ebook at green-shopping.co.uk buy paperback at amazon.com So ...

Capsella bursa-pastoris Description[edit] rosette (a), pointed leaves, flowers (c–e), pods (i, k) Like a number of other plants in several plant families, its seeds contain a substance known as mucilage, a condition known as myxospermy.[8] The adaptive value of myxospermy is unknown,[8] although the fact that mucilage becomes sticky when wet has led some to propose that C. bursa-pastoris traps insects which then provide nutrients to the seedling, which would make it protocarnivorous.[9]

Permaculture / Organic Farming - Documentary Films Archive // May 1st, 2012 // agriculture With information on mushroom cultivation, sowing a fruit forest, alternative ways to keep livestock, and more… Sepp Holzer farms steep mountainsides in Austria 1,500 meters above sea level. His farm is an intricate network of terraces, raised beds, ponds, waterways and tracks, well covered with productive fruit trees and other vegetation, with the farmhouse neatly nestling amongst them. This is in dramatic contrast to his neighbors’ spruce monocultures. In this book, Holzer shares the skill and knowledge acquired over his lifetime. hugelkultur, nature's raised garden beds FOR 25 YEARS I have grown my vegetables in raised beds, but the kind that you need to purchase lumber and bolts and use a saw and hammer to construct, then fill entirely with soil and compost. Lately I’ve been looking longingly at photos of a centuries-old, sustainable way of making raised garden beds called hugelkultur, or hill culture. “It’s like sheet mulching or lasagna gardening,” says Dave Whitinger of All Things Plants, who regularly lectures on the subject, but in hugelkultur, “wood is the first level of your sheet-mulched bed.” In print or my latest public-radio show and podcast, hugelkultur 101 with Dave (whose robust hugelkultur onion bed that is up top). prefer the podcast?

Shepherd's Purse: Herbal Remedies - HowStuffWorks The shape of the shepherd's purse fruit, resembling the purses that Europeans once hung from their belts, gave this herb its name. Shepherd's purse can be found almost anywhere in the world, donning its white flowers throughout the year. Its availability is just one of shepherd's purse's helpful qualities. It can help regulate blood flow and is often used as a herbal remedy to treat regular bleeding disorders, such as heavy periods. Uses for Shepherd's Purse Shepherd's purse is used to stop heavy bleeding and hemorrhaging, particularly from the uterus.

The Food Forest Card Game You probably already know that I am in “shameless self-promotion” mode with the Food Forest card game. Fortunately for all of us, the campaign will soon be drawing to a successful close! The game will eventually be available to the general public but this is the last call for now. weblife.org: Humanure Handbook: Chapter 3: Compost Myths What is one of the first things to come to mind when one thinks of compost? Turning the pile. Turn, turn, turn, has become the mantra of composters worldwide. Early researchers who wrote seminal works in the composting field, such as Gotaas, Rodale, and many others, emphasize turning compost piles, almost obsessively so. Much of compost's current popularity in the West can be attributed to the work of Sir Albert Howard, who wrote An Agricultural Testament (1943) and several other works on aspects of what has now become known as organic agriculture.

Shepherd's Purse Botanical.com Home Page Botanical: Capsella bursa-pastoris (MEDIC.) Family: N.O. What if Permaculturists Designed our Cities? Interview with Richard Register SE: It seems that ecocities are permaculture on a larger scale. In what areas do you think ecocity thinkers can learn from permaculturists, and what can permaculturists do to scale up to city size? RR: It's relatively easy to experiment with permaculture. All you need is a piece of land and you're ready to go. Cities are more difficult - you don't own them and you have to work with the most difficult natural condition in the world: humans.

20 Urban Food Forests from Around the World The Seven Layers of a Food Forest. Diagram by Graham Burnett via Wikipedia. The concept of a food forest has its roots in permaculture, a philosophy that advocates for managing agricultural landscapes in harmony with nature. The practice emphasizes perennial, low-maintenance crops that leverage natural nutrient inputs, drainage patterns and climate to achieve a self-sustaining, food-producing ecosystem. A food forest is quite literally a forest that produces food for people (and, most certainly, forest critters) to eat.