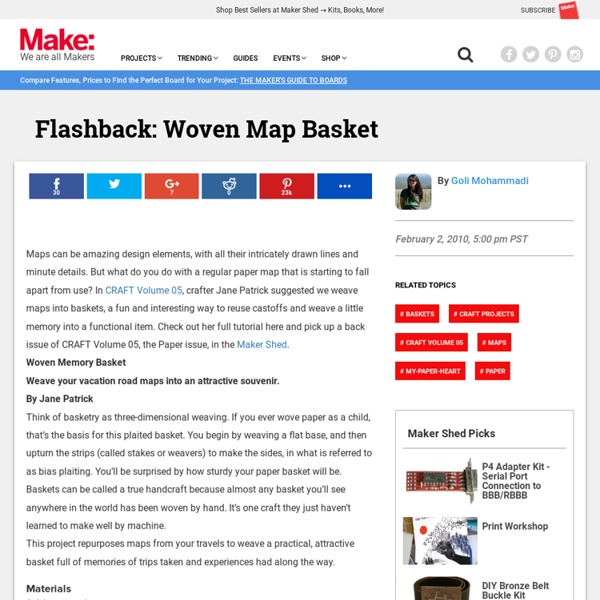 Maps can be amazing design elements, with all their intricately drawn lines and minute details. But what do you do with a regular paper map that is starting to fall apart from use? In CRAFT Volume 05, crafter Jane Patrick suggested we weave maps into baskets, a fun and interesting way to reuse castoffs and weave a little memory into a functional item. Check out her full tutorial here and pick up a back issue of CRAFT Volume 05, the Paper issue, in the Maker Shed.Woven Memory Basket Weave your vacation road maps into an attractive souvenir. By Jane Patrick Think of basketry as three-dimensional weaving. If you ever wove paper as a child, that’s the basis for this plaited basket. Materials 2-3 large road maps Contrasting string or thread Clothespins Cutting mat Rotary cutter Awl or tapestry needle Scissors Small tweezers White glue (optional) to further stiffen the basket Directions Step 1: Prepare the strips. Fold each strip in half lengthwise. You’ve now woven a diamond.

Origami is amazing - the traditional Japanese art or technique of folding paper into a variety of decorative or representational forms, as of animals or flowers. Origami is An Amazing Art now "origamoney"... koi carp butterfly Veggie Art Photos sent to me by my sister-in-law, Debbie. ABOVE: Pretty...this looks like it belongs on a necklace or something... ABOVE: Ginger bubbles are a very nice touch. ABOVE: I'm really, really NOT into these watermelon ones. I think the flesh looks entirely too bloody. ABOVE: Hmm...my guess is that it's supposed to be a bichon frise.

How to make gift bags from newspaper When I bought something at a store recently, the clerk handed me my purchase in a bag made from a newspaper. I liked it very much and had to make some more—thus today's DIY recycled newspaper project: gift bags made from the Wall Street Journal. You can vary the dimensions, of course, but here's what I used to create a bag that's 5" tall, 4.5" wide, and 3" deep. Stack two sheets of newspaper on top of each other. This will be a two-ply bag for extra sturdiness. Cut out a rectangle that's 15.5" wide and 8.25" tall.

Torch made from coke can and cereal box. Do we always have to throw everything away? The torch project below looks at how we can transform materials that we would normally consider as waste, and makes them into a functional everyday product. Hopefully it shows that we don't always have to go to the shops. An hour or so with some scissors, a coke can and a cereal box and you're pretty much set to go. What’s needed for this project Hopefully most of the parts you’ll find in your kitchen cupboards How to make 3D paper ball ornaments I love 3D paper things. Love. And when I saw a little picture of what appeared to be paper balls in a CB2 catalog, I thought, "I am going to make those." So the other day while Alex was writing a paper about mysterious things like polymers and flexible films and tactoids, I made a paper ball. Then I proudly announced I had created a tactoid and it was sitting on my desk. He giggled.

Self-cloning, all-female lizard species discovered in Vietnam Interested in uplifting stories on the natural world, sustainable communities, simple food, and new thinking on how to live well? Please enter a valid email address and try again! No thanks Create Your Own Solar Powered Mason Jar Nightlight from Junk Bargain solar lights are either: - larger than the 2.25" opening of the Mason jar - smaller than the opening in the Mason Jar Larger: The first style I tried was (on clearance from 4th of July) just a touch larger than the opening. Easy enough to detach the blue top section from it's plastic post (not shown here). Next to make things fit I simply had to cut the sides of the light off using the dremmel and a tin snips. This particular size light worked really well because no rewiring, cutting of the lid or even gluing of the lid was needed.

Build 3D paper letters from a nifty font Speaking of Fontstruct, I found something cool over there. Punched Out is a free font that allows you to type letters, print, cut, fold, and glue to make 3D forms. Created by Tobias Sommer, it's available for download at Dafont or Fontstruct. I gave it a try while watching TV. It's a little tedious, but the result is fun! I printed the letters in gray, scored along the center of the dashed lines, and folded so that the printing ended up on the inside of each letter.