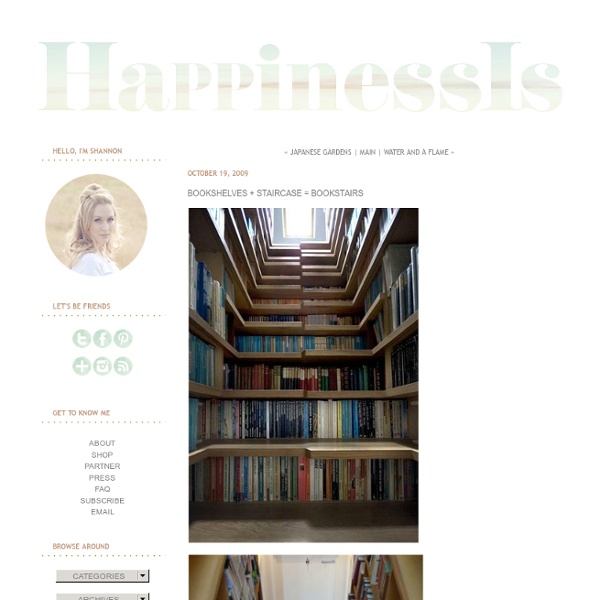 I am so enthralled by these that I just might build some bookstairs that lead to nothing in my pad. This beauty belongs to London-based Veronika and Sebastian. My only addition would be a space to keep a pillow or two so I can sit and read on the stairs if I feel so inclined. P.S. Here are 19 other unique bookshelf ideas. {Images via Creative Cloud}

Color - Live Like You & Marmalade Interiors If you have followed this blog for a while you might be familiar with my line “Life is too Short for White walls”. Well ironically, or perhaps to test myself (?) the bungalow rental we are in for the next few months has…yes…only WHITE walls. After living with a kaleidoscope of colors in our old house it felt at first refreshing with stark white walls. That’s not t say you can’t create some some cheerful spaces with an all white backdrop. Interior design by Emily Henderson. A great starting point add a– BOLD COLORED COUCH. Via Belle Maison. Add CONTRASTING FURNITURE AND PATTERNS. Adding COLORFUL ART and PILLOWS and BOOKS is another way to bring color and life in to the space. Interior Design by Emily Henderson Hmm…there is something be said about white walls. Let the FLOWERS and SMALL ACCESSORIES add the punch. Interior design by Amber Lewis. This cool dining room is framed by white, but nothing a bright kilim can’t slam dunk. (Can’t wait for my vintage kilims to arrive next month.)

5 Things Our Kids Won't Have In School #2. Valedictorians and Other Honors Getty The best part of having a valedictorian was that, like the Highlander and that one kid who insisted on wearing a fedora and a cape every day, every school could only have one. For most kids, the whole valedictorian thing was a non-issue. Getty"I've had four breakdowns, but it's worth it because for 10 whole minutes I'm better than all of you." Going Away Because ... It's that fierce competition that's the problem. GettyMaterial for graduation gowns. Better yet, why not just name anyone with an A+ average valedictorian? Getty"Better get used to it, 'cause this is how they're deciding job applicants now." In other words, you could mentally just strike this one from the list. So what's next, getting rid of failing grades? #1. Everyone remembers their first F. GettyWhole generations will grow to adulthood unable to forge their parents' signatures. Failure makes students feel bad. Which is why programs like Zeros Aren't Permitted (ZAP!) No pressure.

desire to inspire - jo's page A small room off the dining room serves as my husband's office. Originally a bedroom, it is a strange "landlocked" room with windows opening onto other rooms, a consequence of alterations over the years. We think it was the maid's room when the house was first built. After we painted it a couple of years ago (Murabond Faraway, same as the dining room) it basically became a dumping room for Kelvin's computer and any other electrical equipment. Years passed and nothing happened. Kelvin loves to collect as much as I do and some of his special objects found their way into the room. Femme fatale Convicted spyMata Hari made her name synonymous with femme fatale during WWI. A femme fatale (/ˌfæm fəˈtɑːl/ or /ˌfɛm fəˈtɑːl/; French: [fam fatal]) is a stock character of a mysterious and seductive woman whose charms ensnare her lovers, often leading them into compromising, dangerous, and deadly situations. She is an archetype of literature and art. Her ability to entrance and hypnotise her victim with a spell was in the earliest stories seen as being literally supernatural; hence, the femme fatale today is still often described as having a power akin to an enchantress, seductress, vampire, witch, or demon, having power over men. The phrase is French for "fatal woman". Although typically villainous, if not morally ambiguous, and always associated with a sense of mystification and unease,[1] femmes fatales have also appeared as antiheroines in some stories, and some even repent and become true heroines by the end of the tale. History[edit] Ancient archetypes[edit] Sociological views[edit]

design for kids and the home Some paradoxes - an anthology Charming Apartment with Surprising Design Elements Have a look at this fascinating apartment in case you are curious how 64 square meters can be turned into a spacious, chic living space. The hall that welcomes you is wide, featuring high ceilings and light walls, introducing you to the typical 20′s style with tight stucco and decorative parquet. The living room is large enough to accommodate a large sofa, a coffee table, a reading corner and a few lockers for storage. The open floor plan allows the light to flow freely in the apartment. We are certain your attention was caught by the highly original wall drawing, which gives the room a dynamic, yet stylish touch.

“Tear Off” Wallpaper by ZNAK Applying wallpaper to walls has never been so fun. With this perforated “tear off” wallpaper from ZNAK, you can customize the appearance of your space by tearing off the pieces as you please. The wallpaper is created out of non-woven material and the shapes are inspired by the the transformation process of snakes. The Best and Historic Magazine Covers of All Time A Magazine Cover is the most complete form of graphics. It has idea, design, punch-line, typography, art and expressions. Magazine covers provide you more inspiration compared to any other kind of articles. Today, I have collected some of the very best and trend setting magazine covers and titles for you to inspire, aspire and admire. Please comment and tell us what do you think about this post. The New Yorker: September 24, 2001: Twin Towers After the horrific incident of 9/11, The New Yorker paid tribute to the victims through this artistic cover. Esquire: December 2000: Clint It was said that this photo was inspired by Lincoln Memorial, but everybody interpreted it with reference to Monica Lewinsky. Mad: January 1984: Holiday Season Maddy Christmas! National Geographic: June 1985: Afghan Girl The ever famous photo by Steve McCurry. TIME: June 21, 1968: A figure by Roy Lichtenstein, representing a hand with a pistol. National Lampoon: January 1973: Funny One Mad: April, 1969: Uncle Sam

Dear Italy, I love you... ♥ Мила Италия, обичам те... Thursday March 17th, 2011 Have you heard the sentence “Find a beautiful place to get lost”? This exactly happened to one Danish couple. They found a small medieval castle in South Italy and fall in love. The whole story is told by “Skona hem”. And I can only say that I adore Italy and I absolutely fell in love with this place. Знаете ли сентенцията “Намери си красиво място и се изгуби в него”? За мен остава единствено да кажа, че аз обожавам Италия и абсолютно обичам това място.