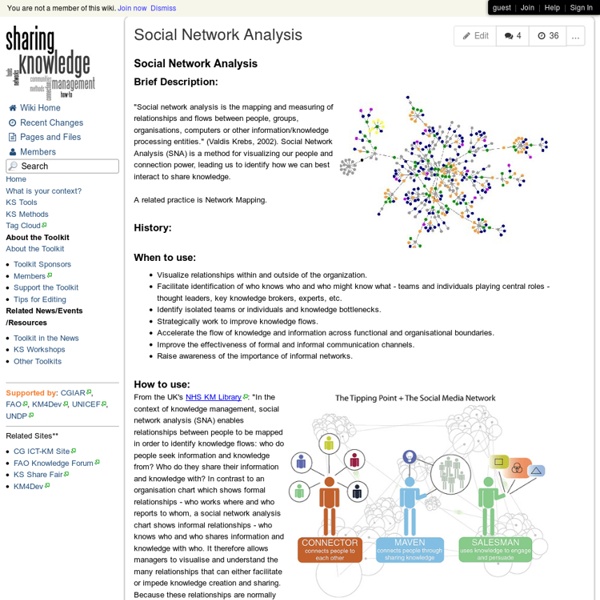 Brief Description: "Social network analysis is the mapping and measuring of relationships and flows between people, groups, organisations, computers or other information/knowledge processing entities." (Valdis Krebs, 2002). Social Network Analysis (SNA) is a method for visualizing our people and connection power, leading us to identify how we can best interact to share knowledge. A related practice is Network Mapping. History: When to use: How to use: From the UK's NHS KM Library: "In the context of knowledge management, social network analysis (SNA) enables relationships between people to be mapped in order to identify knowledge flows: who do people seek information and knowledge from? Informal Face to Face Network Mapping To highlight the value of our social networks, at a face to face gathering create an informal map using Post-it notes on a large piece of paper. Tools and Software for SNA onas Highly recommend. Training on SNA Tips and Lessons Learnt Tags Related:  Social Network Systems • .caisson

The Emerging Science of Superspreaders (And How to Tell If You're One Of Them) Who are the most influential spreaders of information on a network? That’s a question that marketers, bloggers, news services and even governments would like answered. Not least because the answer could provide ways to promote products quickly, to boost the popularity of political parties above their rivals and to seed the rapid spread of news and opinions. So it’s not surprising that network theorists have spent some time thinking about how best to identify these people and to check how the information they receive might spread around a network. Indeed, they’ve found a number of measures that spot so-called superspreaders, people who spread information, ideas or even disease more efficiently than anybody else. But there’s a problem. But there is growing evidence that information does not spread through real networks in the same way as it does through these idealised ones. So the question of how to find the superspreaders remains open.

ation: Provocative Ideas (An excerpt from Imaginization: The Art of Creative Management ) "The Gulf" is very common in what I call "Model 3" organizations. These are organizations that, like Stereotype (a case study discussed in Imaginization: The Art of Creative Management), get stuck in their attempts to change because they are caught by the old bureaucratic forces they are attempting to shake off. I have developed the "Model 3" concept as one of six models of organization designed to characterize organizational forms suited to different degrees of environmental change, and illustrate the difficulties that can be encountered in trying to shift from one form of organization to another. The six templates provide rough models against which people can identify the characteristics of their own organizations or organizational subunits and understand the generic nature of their particular difficulties in managing organizational change. Model 2 works reasonably well for dealing with moderate amounts of change.

Measuring Large-Scale Social Networks with High Resolution This paper describes the deployment of a large-scale study designed to measure human interactions across a variety of communication channels, with high temporal resolution and spanning multiple years—the Copenhagen Networks Study. Specifically, we collect data on face-to-face interactions, telecommunication, social networks, location, and background information (personality, demographics, health, politics) for a densely connected population of 1 000 individuals, using state-of-the-art smartphones as social sensors. Here we provide an overview of the related work and describe the motivation and research agenda driving the study. Additionally, the paper details the data-types measured, and the technical infrastructure in terms of both backend and phone software, as well as an outline of the deployment procedures. We document the participant privacy procedures and their underlying principles. Figures Editor: Yamir Moreno, University of Zaragoza, Spain Copyright: © 2014 Stopczynski et al.

The Remarkable Properties of Mythological Social Networks Ten years ago, few people would have heard of a social network. Today, Facebook, Twitter and LinkedIn permeate our lives. They show us how we are linked to each other and how we are more broadly placed within society. What fascinates scientists is that the general properties of social networks seem to be invariant regardless of where they crop up. For example, one of the remarkable properties of social networks is their small world character. That was entirely unexpected and counterintuitive when it was discovered in the 1960s by the American social psychologist Stanley Milgram. Today, P J Miranda at the Federal Technological University of Paraná in Brazil and a couple of pals study the social network between characters in Homer’s ancient Greek poem the Odyssey. Miranda and co think of each character in the Odyssey as a node in the network. In analysing the Odyssey, they identified 342 unique characters and over 1,700 relations between them.

Community of action A community of action (CoA), unlike a community of practice (CoP), exists in a situation that is structurally more open, where actors have the possibility of bringing about change. These more open situations might, for example, correspond to collective design teams in professional environments. CoAs possess some of the characteristics of communities, such as the development of a common language and mutual learning in the course of action. However, they also possess some of the characteristics typical of more associative social relationships, such as the “voluntary” nature of association and the importance of “common goals” in directing collective activity. Some argue that this makes CoAs more “rational” groups than CoPs. Related to[edit] External links[edit] Facebook feelings are contagious: Study examines how emotions spread online You can’t catch a cold from a friend online. But can you catch a mood? It would seem so, according to new research from the University of California, San Diego. Published in PLOS ONE, the study analyzes over a billion anonymized status updates among more than 100 million users of Facebook in the United States. Positive posts beget positive posts, the study finds, and negative posts beget negative ones, with the positive posts being more influential, or more contagious. “Our study suggests that people are not just choosing other people like themselves to associate with but actually causing their friends’ emotional expressions to change,” said lead author James Fowler, professor of political science in the Division of Social Sciences and of medical genetics in the School of Medicine at UC San Diego. There is abundant scientific literature on how emotion can spread among people – through direct contact, in person – not only among friends but also among strangers or near-strangers.

How to Find the Best Connected Individual in Your Social Network The study of networks has exploded in recent years. Network scientists have measured, simulated, kicked and prodded almost every social network under the sun. And in doing so, they’ve discovered all kinds of fascinating properties of these networks, properties that allow them to better understand the spread information and the role that people play in this process. In particular, theorists have long known that better connected individuals play more important roles in a network because they allow information to spread more efficiently. It’s easy to imagine that mere humans have always been largely ignorant of these networks, given the complexity of these webs and the complicated measures needed to calculate the connectedness of each node within in them. Now Abhijit Banerjee at MIT and a few pals say there is a better way that is faster and cheaper. Banerjee and co made their discovery by studying the network of links between individuals in 75 rural villages in southwest India.

Mapping Twitter Topic Networks: From Polarized Crowds to Community Clusters Polarized Crowds: Political conversations on Twitter Conversations on Twitter create networks with identifiable contours as people reply to and mention one another in their tweets. These conversational structures differ, depending on the subject and the people driving the conversation. If a topic is political, it is common to see two separate, polarized crowds take shape. While these polarized crowds are common in political conversations on Twitter, it is important to remember that the people who take the time to post and talk about political issues on Twitter are a special group. Still, the structure of these Twitter conversations says something meaningful about political discourse these days and the tendency of politically active citizens to sort themselves into distinct partisan camps. Our approach combines analysis of the size and structure of the network and its sub-groups with analysis of the words, hashtags and URLs people use. Conversational archetypes on Twitter Figure 2 Figure 3