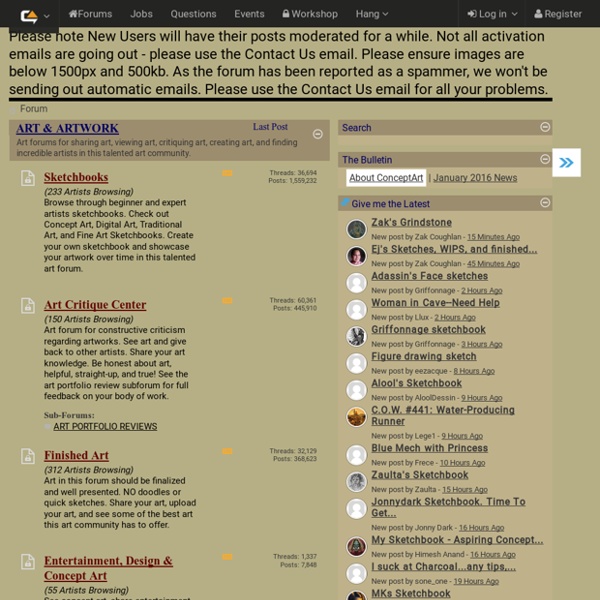 Level Up is a state of the art, on demand, online workshop setting with in-depth assignments, built specifically for visual artists who want to improve key skills. In Level Up, you learn at your own pace and according to your schedule. You can access it anywhere in the world, 24 hours a day, to gain deeper insights, take advantage of constructive critiques, see positive encouragement, and focus on the things you need to get better at what you do. Unlock numerous workshops, great content, and the tools you need to grow in art, right here.

Wacom announces first Bluetooth tablet Wacom Europe has announced the first pen tablet to incorporate wireless technology. The Graphire Bluetooth has an active area of 6x8 inches and is available now priced $249.99 (approx. €192). Bluetooth-enabled devices can communicate at distances of up to 30 meters.

Posts Tagged ‘review’ With the H610, K58, and W58, Huion’s industrial design leapfrogs Monoprice’s tablets and begs for comparison to Wacom’s offerings. While the Monoprice tablets I reviewed previously were the best bang for your drawing buck at the time, these new Huion tablets offer a significant bump in specifications and fit and finish without a huge leap in price. Huion’s line of tablets use the same UC-Logic pen digitizer technology as Monoprice’s tablets. Monoprice’s hotkeys felt flimsy and the stylus was serviceable and utilitarian. No one would call the Monoprice tablets things of beauty, but it was easy to overlook these shortcomings given their price. At around ten percent of the cost of comparable Wacom tablets, with equal or better performance in many regards, the Monoprice line of tablets was my punk-rock drawing tool of choice when not using tablet monitors on my desktops.

THE ART CENTER / Sharing Ideas And Tips From Artist To Artist Someone asked a question about the process of painting a character, so I'll take a stab at that one. There are many processes that each have their strengths, but for the sake of learning this is what I'd suggest. This process is based around the way 3d rendering programs work, using separate passes and combining them together for the final effect.

Macabre kids’ book art by Gojin Ishihara Here is a collection of wonderfully weird illustrations by Gōjin Ishihara, whose work graced the pages of numerous kids' books in the 1970s. The first 16 images below appeared in the "Illustrated Book of Japanese Monsters" (1972), which profiled supernatural creatures from Japanese legend. The other illustrations appeared in various educational and entertainment-oriented publications for children.

Perspective (visual) The development of new forms of geometric projection in the construction of perspective corresponds with the invention of novel pictorial art forms of visual representation in the Italian Renaissance, since the fourteenth century and up till the end of the sixteenth century, and specifically within the circles of architectural and artistic experimentation and design. Treatises were composed on perspective by eminent theorists of art and architecture, including figures like Leon Battista Alberti, Lorenzo Ghiberti, and Piero della Francesca, also aided by experimental uses of optical devices through the installations of Filippo Brunelleschi. According to the book Practice of Looking: An Introduction to Visual Culture, Lisa Cartwright and Marita Sturken state, "Perspective refers to a set of systems or mechanisms used to produce representations of objects in space as if seen by an observer through a window or frame. Railway tracks appear to meet at a distant point.

Create paintings from photos Did you ever wanted to be a great artist? But unfortunately you are really bad at it? Well that's ok because now with Psykopaint you can be a great artist with no skills. But how does it work? Open a photo you like and paint it using a variety of tools like brush, spraycan, ribbon, knife, Psykopaint will choose the colors automatically for you So you don't need to worry about it and focus on a style you like. What’s the best way to learn new creative skills: online or on courses? The leader of Bucks New University's animation and visual effects course details why the best way to learn is combining both online and face-to-face teaching. “Flipping the classroom” is a concept pioneered by American educator and entrepreneur Salman Khan, founder of the Khan Academy, a free online school that teaches millions of children and adults all around the world. Khan’s big idea is that the traditional classroom model is broken. Why sit through a long classroom lecture and then go home and do the homework?

Abandoned Places: 10 Creepy, Beautiful Modern Ruins Abandoned Places: 10 Creepy, Beautiful Modern Ruins Abandoned Places | We humans are explorers by nature. The quest for discovery, both old and new, is part of what separates us from rest of the animal kingdom. Since the world we live in has been largely mapped and plotted, we urban adventurers turn our sights toward the relics of old and the ruins of the recent past. If you find beauty in urban decay, in the crumbling and abandoned places of yesteryear, you’ll want to read on. 100 Awesome Photoshop Brushes Sets You Should Have The demand for high-quality brushes for Photoshop is growing day by day. Designers need brushes for various web projects and photography post-processing. There are so many Photoshop brushes all over the Internet that it’s extremely difficult to find the one that would completely fit your specialised requirements. That is why I decided to collect 100 fantastic and free Photoshop brush sets!

8 steps to becoming a Concept Artist The first time I ever heard about the profession called concept artist was in September 2010. I had come to Thailand in April the same year to get a master's degree in Buddhist Studies but the university was a disappointment and I quickly felt that I needed to look for other options. I had always loved drawing and painting but never tried doing it digitally (except for some pixel art that I created on my Atari in the 80s). I had been a professional photographer and knew Adobe Photoshop very well, but it had never even hit me that it could be used for serious digital painting. I didn't even know that the brushes could be used that way.

How To Draw The Human Head This is a personal collection of mine collected over the web, unfortunately I don’t know which are the authors of these works, so if somebody knows I’m going to be really happy to give the credits to them. Hope to enjoy it. Never stop practice. Antony Gormley Early life[edit] The youngest of seven children born to a German mother and an Irish father,[1] Gormley grew up in a wealthy Roman Catholic[2] family living in Dewsbury Moor, West Yorkshire.[1] He attended Ampleforth College, a Benedictine boarding school in Yorkshire,[1] before reading archaeology, anthropology and the history of art at Trinity College, Cambridge, from 1968 to 1971.[1] He travelled to India and Sri Lanka to learn more about Buddhism between 1971 and 1974.[1] After attending Saint Martin's School of Art and Goldsmiths in London from 1974, he completed his studies with a postgraduate course in sculpture at the Slade School of Fine Art, University College, London, between 1977 and 1979. Career[edit] Gormley's career began with a solo exhibition at the Whitechapel Art Gallery in 1981. Almost all his work takes the human body as its subject, with his own body used in many works as the basis for metal casts.