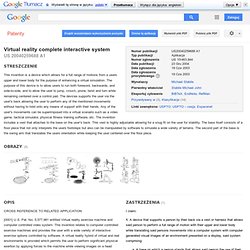 Pat. No. 5,577,981 entitled Virtual reality exercise machine and computer controlled video system: This invention relates to computer controlled exercise machines and provides the user with a wide variety of interactive exercise options controlled by software. A virtual reality hybrid of virtual and real environments is provided which permits the user to perform significant physical exertion by applying forces to the machine while viewing images on a head mounted display. The invention permits the user to view his own hands and body superimposed over a computer generated image of objects that are not actually present while maintaining parts of the exercise machine that the user physically contacts, such as a handle, superimposed over the computer generated image. 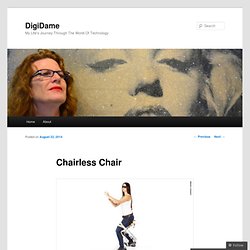 Chairless Chair is the chair that you wear. Noonee's senior partners model the Chairless Chair Image Gallery (3 images) If you work somewhere such as a factory, warehouse, or restaurant kitchen, then you'll know how tiring it can be to stand for several hours at a time. 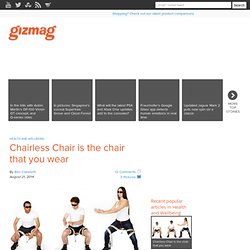 Unfortunately, however, it isn't always practical or safe to carry a stool around with you wherever you go. That's why Swiss start-up noonee has created the Chairless Chair. Worn as an exoskeleton on the back of the legs, it lets you walk or even run as needed, but can be locked into a supporting structure when you go into a sitting position. Company CEO Keith Gunura started developing the Chairless Chair in 2009, when he was a student in the Bioinspired Robotics Lab at the ETH Zurich research institute. Now in prototype form and being actively marketed, the device utilizes a powered variable damper to support the wearer's body weight.

More information is available in the following video. Source: noonee via CNN Share About the Author. Idea for an open source locomotion platform! ("LocoVR") Lowv wrote: Advantages:1) Shifting your balance will fool your vestibular system into thinking that you're actually moving (TRY it!). 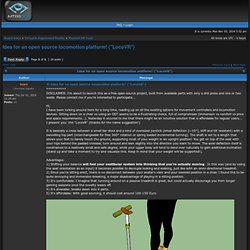 In this way (and by using the seat orientation as an input) it becomes possible to decouple looking and walking, just like with an omni-directional treadmill.2) Since you're standing erect, there is no disconnect between your avatar's view and your lowered position in a chair. I found this to be quite annoying and immersion-breaking, a major disadvantage of playing in a sitting position.3) It's comfortable: I imagine that running around on a passive treadmill is more of a novelty that, once it wears off, will actually discourage you from longer gaming sessions. I think people seriously underestimate this aspect...4) It's stowable: breaks down into 3 parts.5) A commercial product could probably be built for around 100-150 Euro When you consider the safety requirements of a commercial product, these could be large obstacles to overcome. 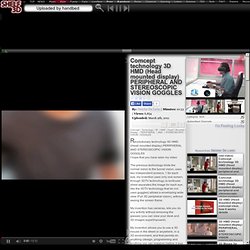 My invention has cameras, lets you do any activity without removing the glasses (you can view your desk and 3D images superimposed). Virtual Reality Technology 3: Delta Six Lifelike Gun Controller. VR2GO. The VR2GO mobile viewer is part of the MxR suite of low-cost immersive viewers, including the Socket HMD and the FOV2GO.

This 3D printed viewer along within the accompanying software package enables the creation of 3-D, immersive virtual and augmented reality experiences using just a smart phone. These low-cost, lightweight systems can be used to create portable virtual reality applications for training, education, health and fitness, entertainment and more. Print one and start building your world today! Hardware Packages File Contents: Object Viewing File, STL File, VR2GO Setup PDF, Licensing Agreement iPhone 4/4s Please Review Our Licensing Agreement Unless required by applicable law or agreed to in writing, software, hardware and materials distributed under this License is distributed on an “AS IS” BASIS, WITHOUT WARRANTIES OR CONDITIONS OF ANY KIND, either express or implied.

DRIVE: Direct Reach Into Virtual Environment. This novel interaction method allows users to reach behind a display and manipulate virtual content (e.g., AR objects) with their bare hands in the volume behind the device. 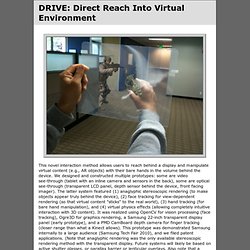 We designed and constructed multiple prototypes: some are video see-through (tablet with an inline camera and sensors in the back), some are optical see-through (transparent LCD panel, depth sensor behind the device, front facing imager). Tracking room using motion tracking markers. Hey! 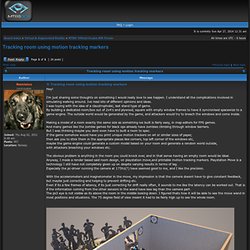 During the weekend I have been going completely crazy with these ideas.