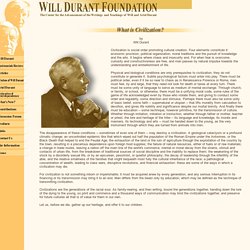 Four elements constitute it: economic provision, political organization, moral traditions and the pursuit of knowledge and the arts. It begins where chaos and insecurity end. For when fear is overcome, curiosity and constructiveness are free, and man passes by natural impulse towards the understanding and embellishment of life. Physical and biological conditions are only prerequisites to civilization; they do not constitute or generate it. Is there something weird about our taste for apocaly... One day in the early 1980s, I was flipping through the TV channels, when I stopped at a news report. 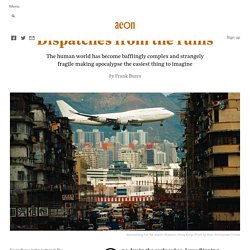 The announcer was grey-haired. His tone was urgent. His pronouncement was dire: between the war in the Middle East, famine in Africa, AIDS in the cities, and communists in Afghanistan, it was clear that the Four Horsemen of the Apocalypse were upon us. The end had come. We were Methodists and I’d never heard this sort of prediction. Life went on, however, and those particular horsemen went out to pasture.

In the years since, I watched this drama play out again and again, both in closed communities such as Waco and Heaven’s Gate, and in the larger world with our panics over SARS, swine flu, and Y2K. But today something is different. Get Aeon straight to your inbox I noticed this change recently when I found myself reading almost nothing but post-apocalyptic fiction, of which there has been an unprecedented outpouring. I read these books like my life depended on it. Social Network Analysis. Brief Description: "Social network analysis is the mapping and measuring of relationships and flows between people, groups, organisations, computers or other information/knowledge processing entities. 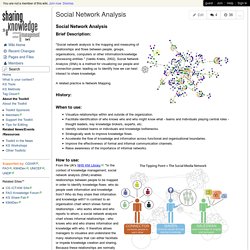 " (Valdis Krebs, 2002). Social Network Analysis (SNA) is a method for visualizing our people and connection power, leading us to identify how we can best interact to share knowledge. A related practice is Network Mapping. History: When to use: How to use: From the UK's NHS KM Library: "In the context of knowledge management, social network analysis (SNA) enables relationships between people to be mapped in order to identify knowledge flows: who do people seek information and knowledge from? Informal Face to Face Network Mapping To highlight the value of our social networks, at a face to face gathering create an informal map using Post-it notes on a large piece of paper.

Tools and Software for SNA Highly recommend. Training on SNA. The Remarkable Properties of Mythological Social Networks. Ten years ago, few people would have heard of a social network. 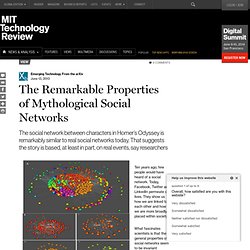 Today, Facebook, Twitter and LinkedIn permeate our lives. They show us how we are linked to each other and how we are more broadly placed within society. What fascinates scientists is that the general properties of social networks seem to be invariant regardless of where they crop up. For example, one of the remarkable properties of social networks is their small world character. This means it is possible to go from one part of a network to any other part in a small number of steps (this is where the phrase “six degrees of separation” comes from). Visualizing Your Facebook Network with Gephi. This is a visualization of my own Facebook network that I made using the (free) software Gephi and the Facebook application netvizz. 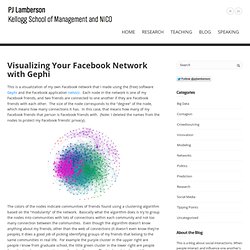 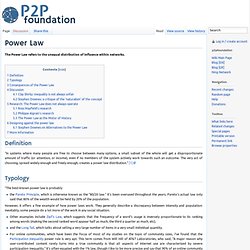 "In systems where many people are free to choose between many options, a small subset of the whole will get a disproportionate amount of traffic (or attention, or income), even if no members of the system actively work towards such an outcome. The very act of choosing, spread widely enough and freely enough, creates a power law distribution. " [1] RSA Animate - The Power of Networks. Complexity and the networked society. Learning + networked society + dossiers + extra home + what's new + index + comments + rss feed With the title "Living and Working in the Information Society", IST98 took place in Vienna from November 30th to December 2nd 1998. 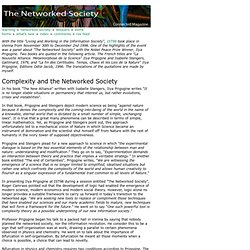 One of the highlights of the event was a panel about "The Networked Society" with the Nobel Peace Prize Winner, Ilya Prigogine. Two books are quoted in the following article. The French titles are "La Nouvelle Alliance. Metamorphose de la Science" Ilya Prigogine and Isabelle Stengers, Gallimard, 1979, and "La fin des Certitudes. Nicholas Christakis: The Sociological Science Behind Social Networks and Social Influence. Social Networks.

The Limits of Social Engineering. In 1969, Playboy published a long, freewheeling interview with Marshall McLuhan in which the media theorist and sixties icon sketched a portrait of the future that was at once seductive and repellent. 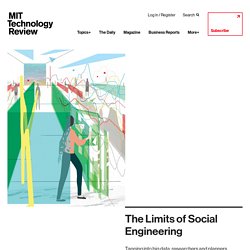 Noting the ability of digital computers to analyze data and communicate messages, he predicted that the machines eventually would be deployed to fine-tune society’s workings. “The computer can be used to direct a network of global thermostats to pattern life in ways that will optimize human awareness,” he said. “Already, it’s technologically feasible to employ the computer to program societies in beneficial ways.”

He acknowledged that such centralized control raised the specter of “brainwashing, or far worse,” but he stressed that “the programming of societies could actually be conducted quite constructively and humanistically.” The interview appeared when computers were used mainly for arcane scientific and industrial number-crunching.