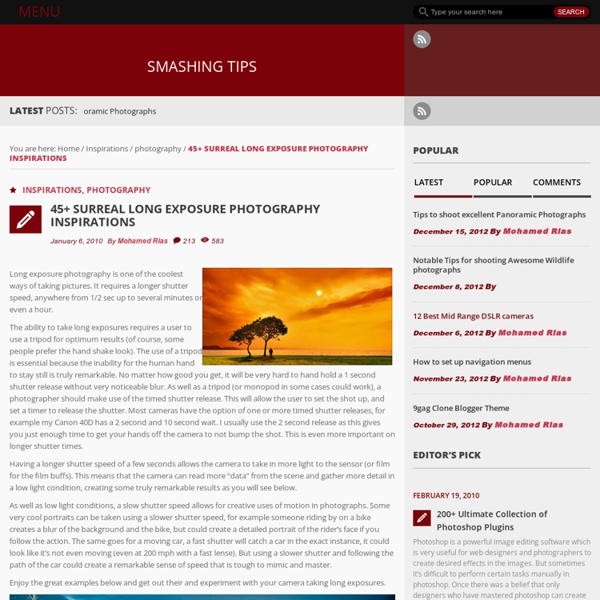 Long exposure photography is one of the coolest ways of taking pictures. It requires a longer shutter speed, anywhere from 1/2 sec up to several minutes or even a hour. The ability to take long exposures requires a user to use a tripod for optimum results (of course, some people prefer the hand shake look). Having a longer shutter speed of a few seconds allows the camera to take in more light to the sensor (or film for the film buffs). As well as low light conditions, a slow shutter speed allows for creative uses of motion in photographs. Enjoy the great examples below and get out their and experiment with your camera taking long exposures. I would like to add some of the best long exposure photographs suggested by my readers here.

65 Gorgeous Panoramic Photographs from Zsolt Zsigmond Zsolt Zsigmond is a 29 year old digital photographer from Hungary, whose use of panoramic techniques in his photographs brings him incredible results. This post features 65 incredible HDR panoramas from Zsolt, from his personal website. Enjoy these beautiful photographs! Don’t forget to subscribe! Scientific Curiosity Captured in Photos Caleb Charland is a Maine-based photographer who combines a love of scientific experiments and photographs into wonderful and amazing photographs. If Isaac Newton or Benjamin Franklin were into photography, their photographs might look something like these: “Wooden Box with Horseshoe Magnet” “Atomic Model” “Demonstration with Hair Dryer and Aluminum Foil” “Candle in a Vortex of Water” “Fifteen Hours” Regarding his work, Charland tells us, Wonder is a state of mind somewhere between knowledge and uncertainty. To check out more of his work, you can visit his website. Image credits: Photographs by Caleb Charland and used with permission.

Light Stalking » 7 Reasons HDR is Here to Stay And Why That’s a Good Thing High Dynamic Range, or HDR, is a term that’s thrown around pretty loosely now through the Internet among photographers, but few actually know what it is. The truth is, there isn’t much knew about the concept, it’s just with digital photography progressing and software engineers developing new tools along with hardware to handle them, the option to create HDR pieces is easier than ever. Photo by Paulo Brandão HDR, in a nutshell, is exposing the same frame at different exposures and then layering them together to take the best parts of all frames and put it into one single image. It allows photographers to show highlights and shadows together in a frame in a way they’ve never before been able to. 1. 2. 3. 4. Photo by AF-Photography 5. Photo by Stuck in Customs 6. 7. If you haven’t tried HDR, we urge you to.

Amazingly Creative Drawing Vs Photography This wonderful work has done by a very talented Belgian painter, illustrator, portraitist, caricaturist and photographer Ben Heine. This creative artist was born in Abidjan, Ivory Coast. He Studied graphic arts and sculpture and I also have a degree in journalism. Captured: Color Photography from Russia in the Early 1900&#039;s | Plog — W... Posted Oct 21, 2009 Share This Gallery inShare58 The photographs of Russian chemist and photographer, Sergei Mikhailovich Prokudin-Gorskii, show Russia on the eve of World War I and the coming of the revolution. From 1909-1912 and again in 1915, Prokudin-Gorskii travelled across the Russian Empire, documenting life, landscapes and the work of Russain people. His images were to be a photographic survey of the time. He travelled in a special train car transformed into a dark room to process his special process of creating color images, a technology that was in its infancy in the early 1900′s. View of the monastery from Svetlitsa Island, Saint Nil Stolbenskii Monastery, Lake Seliger; 1910 Sergei Mikhailovich Prokudin-Gorskii Collection (Library of Congress) Peasant girls, Russian Empire. Trans-Siberian Railway metal truss bridge on stone piers, over the Kama River near Perm, Ural Mountains Region; ca. 1910 Sergei Mikhailovich Prokudin-Gorskii Collection (Library of Congress)

35 Beautiful Examples Of Shadow Photography Advertisement Shadows add facet and significance to an image. They can highlight emotions, create surreal images, and be used in a variety of ways. The difference between the picture and its shadow makes an amazing photograph. Recommended Posts : We have put together 35 Beautiful Examples Of Shadow Photography that make strong use of shadows in a variety of ways. Shadows of summer Shadow games Time Winter light and shadow walking shadow Shadow bike… Shadowed land by John Parminter. Sunset Boulevard Shadow Gallop Through a Shadow shine & shadow Tired shadow Faded Angela Bacon-Kidwell Urban fragments Shadows on Night Snowshadows Moon Shadow Bridge Star Child Shadows’ Meeting Waverider Moth Shadow Self Portrait Tree and shadow Shadows on the wall Dragonfly – shadow Reflections and Shadows

triggerpit.com Go Discovery! It was October 23, 2007 at 11:40am EST when I had my first ride to space on Discovery. She’s beautiful… just sad that this will be her last voyage. On September 22, 2010, with the departure of the Expedition 23 crew, Colonel Douglas H. We thought that we should put some of the space photos together as a tribute to him and the whole ISS crew. The following space photos are all visible on Astro_Wheels’ twitpic account, and we are eternally grateful to him for sharing these space photos with the world. Incredible Photos from Space: ‘Earthshine’… The Space Station basking in blue Earthshine as the rising sun pierces our razor-thin atmosphere to cover the Space Station with blue light. NASA astronaut Douglas H. Incredible Photos from Space: Isle Juan de Nova In the Mozambique Channel between Madagascar and the African mainland. Incredible Photos from Space: Aurora Borealis In the distance on this beautiful night over Europe.

Lorelei Web Design Focus is critical, pixels are cheap If you are shooting wide open, which is at the camera’s largest aperture, your depth of field will be correspondingly shallow. That means your focus is going to be even more critical than otherwise. Pick a point that needs to be sharp and really pay attention to keeping that point sharp. Get $90 off Your Purchase of PowerShot SD980 IS 12.1 Megapixel Digital Camera Shooting for stock, know your equipment, know your agency If you are shooting with a stock agency in mind it is good to know just how high you can push your ISO before you reach the point where the agency is going to reject the image. Exposure and more RAW (the file format native to the camera) has been talked to death, Pages: 1 2