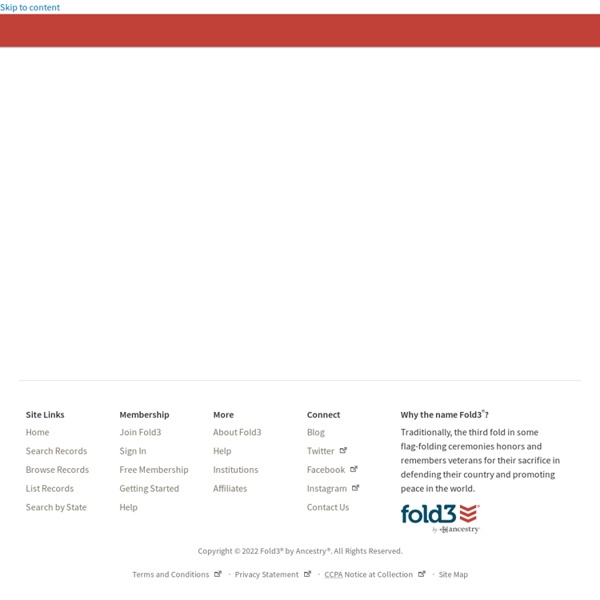 54 Teaching and Lesson Plan Ideas for History Teachers #sschat Since I've recently given a set of my curated plans for math teachers, English teachers and general common core standards (see end of this post), I thought I'd share some lessons for history teachers. If you're a history teacher and not following #sschat on Twitter, you should. This is a set of 12 lessons about what it was like for children to live in the second world war. I love this set of lessons because it builds empathy and helps teach the story of world war 2 from a child's perspective.

Internet Modern History Sourcebooks Internet Modern History Sourcebook Editor: Paul Halsall See Introduction for an explanation of the Sourcebook's goals. Explanation of Sources of Material Here. See the Help! page for all the help on research I can offer. National Jukebox LOC.gov WARNING: Historical recordings may contain offensive language. Read the disclaimer Now Playing... Google Genealogy Style Google is the search engine of choice for most genealogists I know, due to its ability to return relevant search results for genealogy and surname queries and its huge index. Google is much more than just a tool for finding Web sites, however, and most people surfing for information on their ancestors barely scratch the surface of its full potential. If you know what you are doing, you can use Google to search within Web sites, locate photos of your ancestors, bring back dead sites, and track down missing relatives. Learn how to Google as you've never Googled before. Begin with the Basics

Internet Ancient History Sourcebooks Internet Ancient History Sourcebook Editor: Paul Halsall The Internet Ancient History Sourcebook has expanded greatly since its creation, and now contains hundred of local files as well as links to source texts throughout the net. See Introduction for an explanation of the Sourcebook's goals. See the Help! page for all the help on research I can offer. American Slave Narratives From 1936 to 1938, over 2,300 former slaves from across the American South were interviewed by writers and journalists under the aegis of the Works Progress Administration. These former slaves, most born in the last years of the slave regime or during the Civil War, provided first-hand accounts of their experiences on plantations, in cities, and on small farms. Their narratives remain a peerless resource for understanding the lives of America's four million slaves. What makes the WPA narratives so rich is that they capture the very voices of American slavery, revealing the texture of life as it was experienced and remembered. Each narrative taken alone offers a fragmentary, microcosmic representation of slave life. Read together, they offer a sweeping composite view of slavery in North America, allowing us to explore some of the most compelling themes of nineteenth-century slavery, including labor, resistance and flight, family life, relations with masters, and religious belief.

Atlas of Historical County Boundaries Project National Data Click on the national map to see all of the Atlas' content related to the nation at one view. Like the state map above this content includes interactive maps, shapefiles, and metadata. Boundary Animations 42 Interactive History Lessons From Google If you’re looking for a free and useful tool to help bring history to life, Google has you covered. The search giant has been making big strides into education lately and classrooms around the world are benefiting. The Google Cultural Institute is an elegantly designed but elaborate resource that offers a glimpse into key happenings from years past. The website uses a horizontal-scrolling timeline view to help create a sense of time passing.

David Rumsey Historical Map Collection The new MapRank search tool enables geographical searching of the collection by map location and coverage, in a Google Map window. Pan and zoom the Google Map to the area of the world you want maps of, and the results will automatically appear as a scrollable list of maps with thumbnail images in the right side window. The maps in the right side list are ranked by coverage, with the maps that have coverage closest to your search window listed at the top.

African Americans and World War I World War I was a transformative moment in African-American history. What began as a seemingly distant European conflict soon became an event with revolutionary implications for the social, economic, and political future of black people. The war directly impacted all African Americans, male and female, northerner and southerner, soldier and civilian. Migration, military service, racial violence, and political protest combined to make the war years one of the most dynamic periods of the African-American experience. Black people contested the boundaries of American democracy, demanded their rights as American citizens, and asserted their very humanity in ways both subtle and dramatic. Recognizing the significance of World War I is essential to developing a full understanding of modern African-American history and the struggle for black freedom.

1841 - 1911 census records As with any family history records, original census returns are not free from mistakes; you should therefore keep an open mind when using the data and not believe everything you read. Some common errors that can be found in census returns are as follows: Errors in recording census data