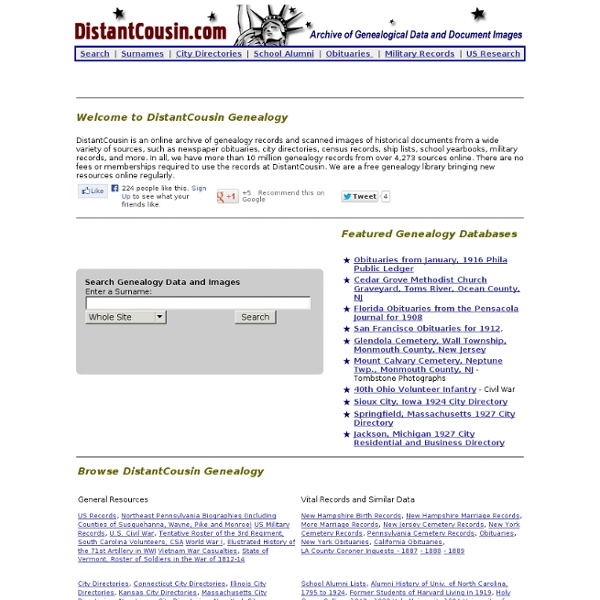 A Genealogist In The Archives This is the first post of “A Genealogist In The Archives” blog. My goal with this blog is to educate genealogists about the importance of archives and all that they have to offer. There are thousands of archives in the United States that are full of documents, photographs, artifacts and other ephemera that is just waiting to be discovered by YOU the genealogy researcher! What Is A Finding Aid? If you have ever been to a local or state archives doing research in a Manuscript Collection you most likely have come across a “Finding Aid” within a specific collection. MSS-2, Marie Stockard Estate Collection, Box #1, located in the Houston County, Tennessee Archives Manuscript Collection A finding aid is a document containing detailed information about a specific collection of papers or records within an archive. The information found in a Finding Aid may be different depending on the type of material it is describing.

Family Genealogy & History Internet Education Directory - Wiki COWDEN RANCH | The Handbook of Texas Online| Texas State Historical Association (TSHA) COWDEN RANCH. The Cowden, or JAL, ranch originated in 1882, when the brothers George, John M., and William Henry Cowden bought 100 cattle and the JAL brand from Alonzo Edwards in Palo Pinto County. The brand's origin remains a mystery; theories claim that it came from the initials of John A. Lynch, James A. During the next two years the Cowdens' JAL cattle reportedly were scattered all the way from Midland to the Carlsbad area of New Mexico and as far south as Horsehead Crossing on the Pecos River. For twenty-five years the Cowden Cattle Company operated the JAL ranch, which at its peak covered one-fourth of Lea County, New Mexico, and portions of adjacent Texas counties. After the turn of the century the influx of homesteaders into Lea County resulted in the rapid reduction of the JAL range. Gus L. The following, adapted from the Chicago Manual of Style, 15th edition, is the preferred citation for this article. H.

Wills of millions of Americans now available online - CenturyLink BOSTON (AP) — Paul Revere left all his household furniture to an unmarried daughter. Harriet Beecher Stowe bequeathed her stock in several railroads and a Florida orange grove to her son. Daniel Webster willed a beloved grandson a gold snuff box with the head of George Washington on it and all his fishing tackle. Eli Whitney left two nephews $1,000 each. Such mundane details that shed insights into the family relationships of some of America's most famous citizens are now just a mouse click away. Most Americans know the grand narrative of the nation's most famous historical figures, but the records contain information not found in most textbooks. It's also a valuable resource for ordinary Americans digging into their roots. "What you find in probate records and wills are the rich stories about what mattered enough to pass down and a wealth of information about family history," said Jennifer Utley, senior manager of research at Ancestry.com's Utah headquarters. Online: www.ancestry.com

Olive Tree Genealogy Blog: Starting a Genealogy and Family Hope Chest Going through my mother's boxes from her apartment, and re-examing Doris' Genealogy Box has made me stop and think. Have I made sure that the genealogy and family treasures in my care are going to be passed on to others for safe-keeping? I am sure that many of us have such treasured items. It should be easy. Will Others Treasure Your Treasures? Another scenario - you have family treasures that you enjoy so you don't want to pass them on to others now, but you want to be sure they go to other family members when you are gone. There are logistics involved in passing on family heirlooms and genealogy papers. What about Great grandma's wedding ring? Your great-uncle's Military Medals and papers - is it really logical to think that a jumbled mass of documents with some tarnished medals is still going to be kept all together by one descendant and its provenance still remembered? Who Wants Your Masses of Genealogy Papers! Who Will Carry the Torch? Develop a Plan Step 1 First, make a list.

A Genealogist In The Archives One of the most exciting aspects of being an archivist is when a person walks in the archives with a box of records they wish to donate. Every archivist will admit that their heart skips a beat when they see someone walk into their archives with records to donate. Houston County, Tennessee Retired Teachers Scrapbooks Donation A lot of archives would not be an archive without donors and the records they bring to us. We depend on people to help us save our history by donating family records that are not wanted, finds at garage sales and purchasing records at estate sales. A lot of small archives like the Houston County, Tennessee Archives does not have the budget to go out and purchase records, photographs and memorabilia at auctions or anywhere else. When someone donates anything to an archive, the archivist should present the donor with a document that is called “A Deed of Gift”. Houston County, Tennessee Lions Club Records and Memorabilia Donation -name of the donor and archive

An Underutilized Treasure! Spread the Word!! | Passage to the Past's Blog A few months ago, my husband accepted a new job and relocated to the Washington, D.C. area, giving me the opportunity to explore the genealogical treasures held at the Library of Congress, DAR Library and the National Archives (NARA). One underutilized “treasure” is the newly opened Innovation Hub at NARA. It is a place where you scan the documents of our ancestors, held at NARA, for FREE! Once scanned, you keep a digital copy for yourself, then the NARA folks put your scans on their website where anyone can access them for FREE! I visited yesterday and the room was empty. It seems the word hasn’t gotten out yet; everyone is still standing in long lines on the public side of the building to see the Declaration of Independence. They accept groups (any 8th grade teachers or genealogical societies planning an outing?). The process is simple. What can you find? Inside a pension file, was a marriage record for Robert Humphreys and Sarah E. So what are you waiting for! Like this: Like Loading...

Handwriting Helps: The Eszett, Windows Character Map, and Legacy's Character Ribbon - Legacy News Can you interpret this name? Neither could I. Until I remembered something that Jim Beidler taught in Wednesday's webinar, German Names and Naming Patterns. And while this was from a Swedish record, the principle of the handwriting applies. In the Question/Answer session (timestamp 1:20:21) a viewer asked Jim to explain the "double-S". He taught that this letter, known as an eszett, is easily confused with a capital B, and is no longer used in modern German handwriting. ß Can you pick out the eszett in the image above? Andersson Any guesses on the given name? Per I never would have figured out the given name if it stood alone like this, but with the surrounding information in the record and what I had already learned about the family, it was easier to decipher that this was indeed Per Andersson, my great-great-great-great-great-great-great-great grandfather, born in 1709 in Sweden. Character Map Click on the letter you want to use, and look for the "Keystroke" in the lower right corner.

Then and now Google Images, writing prompts, HistoryPin, and other cool stuff Several months ago, I was in beautiful Fremont, Washington, a community north of downtown Seattle. My son had just graduated from Seattle Pacific and we had the opportunity to spend a few days exploring the metro area. We had already done all of the typical Seattle touristy things – Pike’s Market, Space Needle, the icky wall of chewing gum. While looking for lesser known attractions, Jake suggested Fremont. While browsing through one particular booth looking for artistic inspiration, my daughter ran across a box full of old photographs. Erin selected a pile of the most interesting images – picking quite a few that seemed to be from the same camera roll and photographer. Okay. It took me a while to figure out the so what. After almost two decades of living in the house of a history nerd, this became a challenge for her that had to be defeated. A flip through some of her art books revealed nothing. Then she remembered some of her Google Image search skills. Try it yourself. Yeah. And yes.

Children of Civil War Veterans Still Walk Among Us, 150 Years After the War How many people alive today can say that their father was a Civil War soldier who shook hands with Abraham Lincoln in the White House? Fred Upham can. Despite sounding like a tall tale and a mathematical impossibility, it's documented truth. Fred's father, William, was a private in the Union Army's Second Wisconsin Volunteer Infantry Regiment. Fred's in exclusive company—the dwindling group of children of soldiers who fought, North against South, 150 years ago. All are very old "children" (Fred, 93, is not the oldest among them), born mostly in the 1910s and 1920s to Civil War veterans and young brides. Fewer than 35 of these remarkable offspring are now on the rolls of heritage groups that keep track of them. "A Treasure" "They're a true link to another part of this country's history," says Gail Lowman Crosby, president of the real daughter club for the United Daughters of the Confederacy (UDC). "Mostly, he told stories on Sundays," she says. Iris's and Fred's fathers were lucky.

Nutfield Genealogy: Flip-Pal Project #1 Post #4Project #1 I packed up my Flip-Pal scanner and hit the road for my mother's house to try my first holiday gift project. I didn't want the scanner to get bumped or scratched, so I put it into the neoprene zipped case I use for my laptop. This was much too big for the little Flip-Pal, so I am seriously considering the case sold on the website at www.flip-pal.com. At Mom's house I got right to work scanning some of her photo albums for some old family pictures. Photopaper for a computer printer scissors compass rubber cement old china saucers and dishes, any size Step 1: Have fun selecting some old dishes from yard sales, consignment shops or the attic. Step 2: Print out the selected digital scans of your favorite photos on photopaper (regular paper doesn't provide nice results). Step 3: Smear rubber cement on the photo and on the plate. Step 4: Ta-Dah! Rating System (out of a possible five stars) ------------------- Copyright 2011, Heather Wilkinson Rojo