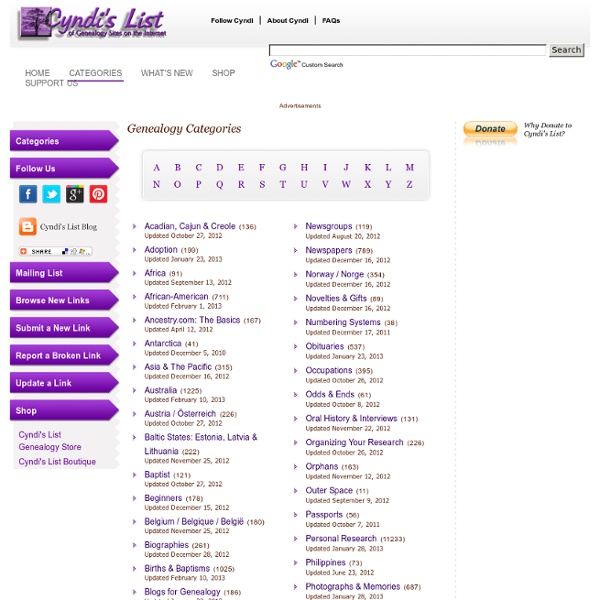 Lists of Bests Fold3 - Historical military records Family Genealogy & History Internet Education Directory - Wiki USGENWEB Project 10 Websites to Watch in 2011 There are more than a trillion URLs in Google's index. Yes, that's a one with twelve zeros after it. And Google crossed that milestone two and a half years ago. With so many sites on the web in 2011, how do you know which to pay attention to? Mashable's editors haven't quite visited a trillion pages, but we've checked out a lot in the past year, and we've compiled a list of 10 websites we think are poised to have big years in 2011. Some of these are relatively new sites we think will catch the mainstream's attention next year and others are older sites that we think will finally hit the big time in 2011. Check out our list below and let us know in the comments which websites you have your eye on for the coming year. 1. Kickstarter, a crowdfunding platform for creative endeavors, was founded in April 2009 and had what many would consider a break-out year in 2010. -Josh Catone, Features Editor 2. -Vadim Lavrusik, Community Manager 3. -Jehangir Irani, Multimedia Producer 4. -Ben Parr, Co-Editor

Finding Funeral Cards Online for your Genealogy Background | Search With a long tradition both in the United States and Europe dating back to the 1800's, funeral cards (also sometimes called mass, mourning or remembrance cards) are an excellent source of information for genealogists. While not a traditional "vital record", they often provide great clues like death and birth dates, name of the cemetery where the deceased was interred, name of the funeral home, and sometimes even a photo of the ancestor. In her article, Funeral Cards, Elizabeth Kelley Kerstens explained that, "funeral cards were to be distributed to family members, friends, and the surrounding community in a timely manner to alert invitees to the date and time of the funeral. Recipients of a funeral card were expected to attend the funeral or risk offending family members. At a recent paper show, we stumbled across a bunch of funeral cards in a box labelled "all items ten cents each." Search the Funeral Cards Online collection Contributing Funeral Cards What is Ephemera?

RootsWeb.com 30+ Mind Mapping Tools We all need to organize our thoughts sometimes, and there seems to be no better way to do it than in a visual fashion. We've got 30+ mind mapping tools to help you do just that. And since we know some of you are on a budget, we've got free and paid suggestions for you. Don’t forget to check out our post where you can suggest future toolbox topics! (This list, for example, came from one of the suggestions.) Free Bubbl.us - A flash based brainstorming tool that you can share with others and also embed in to your site. Cayra.net - A desktop-only app that runs on Windows XP or Vista. CmapTools - Free to universities, students, federal employees, and individuals for personal use. CompendiumInstitute.org - A free mind mapping and brainstorming tool from the Open University. DebateMapper.com - A bit of a different mapper in that it focuses on mapping out debates, whether they be political or business. Gliffy.com - Draw & share all sorts of diagrams and mind maps. MindPlan.com - Free for personal use.