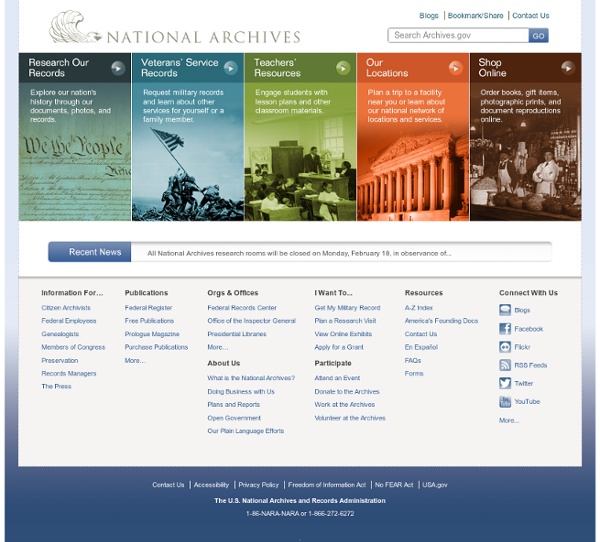 National Art Inventories What are the Inventories? The Inventories of American Painting and Sculpture document more than 400,000 artworks in public and private collections worldwide. The Inventory of American Paintings includes works by artists who were active in America by 1914. The National Security Archive December 9, 2014 Torture Report Finally Released Senate Intelligence Committee Summary of CIA's Detention and Interrogation Program Concludes CIA Misled Itself, Congress, the President about Lack of Effectiveness. September 28, 2014 FBI The FBI’s Reading Room contains many files of public interest and historical value. In compliance with the National Archives and Records Administration (NARA) requirements, some of these records are no longer in the physical possession of the FBI, eliminating the FBI’s capability to re-review and/or re-process this material. Please note, that the information found in these files may no longer reflect the current beliefs, positions, opinions, or policies currently held by the FBI.

Civil War Primary Sources Primary Documents by Topic: Most Popular Official Records Addresses & Speeches Acts, Bills, & Orders Military Correspondence & Documents Personal Correspondence & Narratives Prints & Photos Maps Document Collections Getting Started Primary Documents Official Confederate Correspondence West Point Altas Collection About Our Atlases In 1938 the predecessors of today's Department of History at the United States Military Academy began developing a series of campaign atlases to aid in teaching cadets a course entitled, "History of the Military Art." Since then, the Department has produced over six atlases and more than one thousand maps, encompassing not only America’s wars but global conflicts as well. In keeping abreast with today's technology, the Department of History is providing these maps on the internet as part of the department's outreach program.

The University of Oklahoma College of Law: A Chronology of US Historical Documents Links marked with an asterisk (*) are to other websites and will open in a new window. Pre-Colonial To 1600 The Magna Carta (1215) Letter from Christopher Columbus to the King & Queen of Spain (1490's) The *Iroquois Constitution

American Geographical Society - Mission, Cause and Credo Mission The American Geographical Society (AGS) advances and promotes geography in business, government, science, and education. Our goal is to enhance the nation’s geographic literacy so as to engender sound public policy, national security, and human well-being worldwide. Cause Since 1851, AGS has been a leading advocate for geography in the United States and around the world. We continue unabated in our efforts to advance geographical understanding. Primary Sources: Overview of Collections One of the nation’s top collections of rare law books is housed in the Paskus-Danziger Rare Book Room of the Lillian Goldman Library at the Yale Law School. The collection is particularly strong in Anglo-American common law materials, including case reports, digests, statutes, trials, treatises, and popular works on the law. Other strengths include Roman and canon law, international law (especially the works of Hugo Grotius and Samuel Pufendorf), and early law books from most European countries. Of special interest ... Hours: Monday-Friday, 9 a.m.-4 p.m.Location: Sterling Law Building, 127 Wall St., Level L2, Room 003 Phone: 203 432-4494 Web site: (back to top)

New York Public Library Puts 20,000 Hi-Res Maps Online & Makes Them Free to Download and Use When I was a kid, my father brought home from I know not where an enormous collection of National Geographic magazines spanning the years 1917 to 1985. I found, tucked in almost every issue, one of the magazine’s gorgeous maps—of the Moon, St. Petersburg, the Himalayas, Eastern Europe’s ever-shifting boundaries.