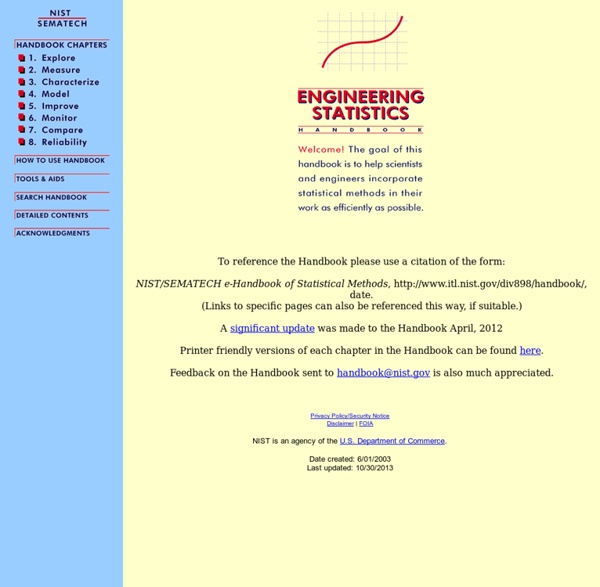 Basic Statistics Descriptive Statistics "True" Mean and Confidence Interval. Probably the most often used descriptive statistic is the mean. Shape of the Distribution, Normality. More precise information can be obtained by performing one of the tests of normality to determine the probability that the sample came from a normally distributed population of observations (e.g., the so-called Kolmogorov-Smirnov test, or the Shapiro-Wilks' W test. The graph allows you to evaluate the normality of the empirical distribution because it also shows the normal curve superimposed over the histogram. Correlations Purpose (What is Correlation?) The most widely-used type of correlation coefficient is Pearson r, also called linear or product- moment correlation. Simple Linear Correlation (Pearson r). This line is called the regression line or least squares line, because it is determined such that the sum of the squared distances of all the data points from the line is the lowest possible. Significance of Correlations.

Minitab Minitab is a statistics package developed at the Pennsylvania State University by researchers Barbara F. Ryan, Thomas A. Ryan, Jr., and Brian L. Joiner in 1972. Minitab began as a light version of OMNITAB, a statistical analysis program by NIST; the documentation for OMNITAB was published 1986, and there has been no significant development since then.[2] Minitab is distributed by Minitab Inc, a privately owned company headquartered in State College, Pennsylvania, with subsidiaries in Coventry, England (Minitab Ltd.), Paris, France (Minitab SARL) and Sydney, Australia (Minitab Pty.). Today, Minitab is often used in conjunction with the implementation of Six sigma, CMMI and other statistics-based process improvement methods. Minitab 17, the latest version of the software, is available in 8 languages: English, French, German, Japanese, Korean, Portuguese, Simplified Chinese, & Spanish. Uses of Minitab[edit] See also[edit] References[edit] "Minitab Statistical Software Features - Minitab."