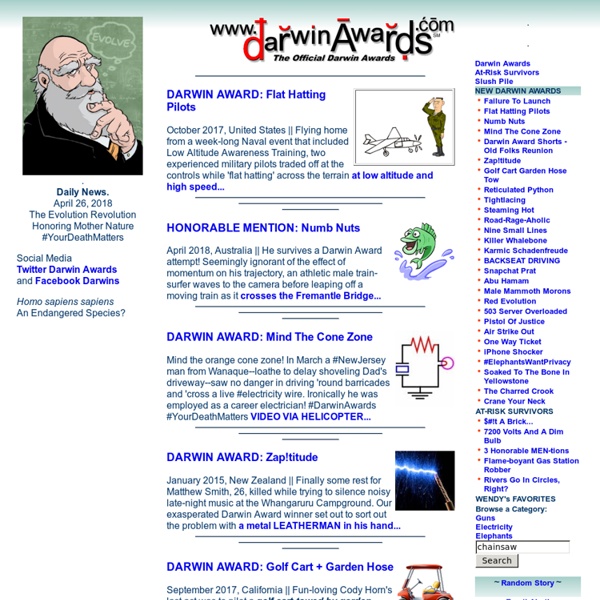 DARWIN AWARD: Newcastle Icicle (31 March 2013, Newcastle, England) Investigative journalism reaches a new "low" when a reporter freezes to death in an effort to get inside the lives of those who sleep rough... DARWIN AWARD: Smokin' Hot Sauce! Thinking he was drinking alcohol, Gary picked up a salsa jar and took a swig of gasoline. After spitting it up onto his clothing, he recovered from the shock by lighting a cigarette... HONORABLE MENTION: Alligator River The East Alligator River in the Northern Territory is crossed at Cahill's Crossing. Recently a Euro tourist drove into the parking lot of the an upstream boat launch area in her hired 4WD vehicle and, seeing a concrete ramp disappearing into the water, assumed that she had reached Cahill's Crossing...

How it's made Have you ever wondered how Pringles get Pringle-shaped? Or how about pretzels? How is any machine able to mass produce the food and products we love so much? These mesmerizing animated gifs show just how it’s done for 22 different everyday items… you won’t be able to look away. funny air traffic controllers quotes and amusing aviation conversations Due to the nature of these stories, flight terminology below may not always be technically correct, and may also be edited or explained in parts for the benefit of non-aviation folk. I am grateful for these ATC and aviation quotes and stories sent to me by various people. Thank you. Please keep them coming. From S Dee (14 Nov 2011):

Explanation - John's Personality Test<sup>α</sup> Personality Types: Explained The brain is in charge of everything from regulating our heartbeat, to remembering what was for dinner yesterday. Many of these functions are unconscious – not a part of our everyday awareness. Murphy's Law Calculator Murphy's Law Calculator From a formula for * Sod's Law provided by British Gas: ((U+C+I) x (10-S))/20 x A x 1/(1-sin(F/10)) "anything that can go wrong, will go wrong!" Find out in advance whether you will be able to successfully repair your VCR, get to a meeting on time, impress your date, or be a success at any activity whatsoever ! Score: 4.355 Risk Factor: 35286.9

Astronomers discover star racing around black hole at Milky Way center UCLA astronomers report the discovery of a remarkable star that orbits the enormous black hole at the center of our Milky Way galaxy in a blistering 11-and-a-half years—the shortest known orbit of any star near this black hole. The star, known as S0-102, may help astronomers discover whether Albert Einstein was right in his fundamental prediction of how black holes warp space and time, said research co-author Andrea Ghez, leader of the discovery team and a UCLA professor of physics and astronomy who holds the Lauren B. Leichtman and Arthur E.

Real Nurses Share True Ghost Stories Here are a few creepy tales from AllNurses.com, a website dedicated to nurses and the medical profession. Pleasant dreams! Don’t Let Them Take Me The best I have heard is from a nurse who said that one night she was floated to oncology at the hospital where she used to work. She was given a patient who was passing away and had been unconscious for several days. At one point during the night the nurse went into the room and the patient was at the top of the bed and looked at her and said, “Don’t let them take me!” The nurse was freaked out and asked the patient who was going to take her and she said that black thing up there and pointed up in the air.