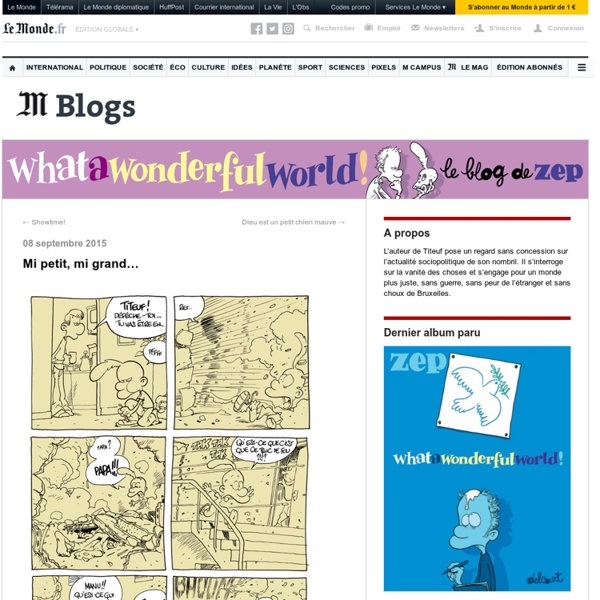 Why Migration Should Be Central to Paris COP21 Climate Talks “We live in constant fear of the adverse impacts of climate change. For a coral atoll nation, sea level rise and more severe weather events loom as a growing threat to our entire population. The threat is real and serious, and is of no difference to a slow and insidious form of terrorism against us.” - Prime Minister of Tuvalu Saufatu Sapo’aga at the United Nations In the aftermath of the Paris attacks, world leaders are closing their borders to refugees and cracking down on civil society participation in the upcoming climate negotiations. Over the past 15 years, the War on Terror has allowed for increased state powers while curbing fundamental rights, especially of racialized bodies marked as threats.

These moving photos of the refugee crisis just won a Pulitzer Prize Warning: Some people may find some of the photos in this article distressing Gripping images of Europe's refugee crisis won the 2016 Pulitzer Prize for breaking news photography on Monday. The judging committee said that the joint first place prize was awarded to Mauricio Lima, Sergey Ponomarev, Tyler Hicks and Daniel Etter's work for The New York Times and the photography staffers of news agency Thomson Reuters for photos that "captured the resolve of refugees, the perils of their journeys and the struggle of host countries to take them in."

World Migration Map - Data Visualization by Metrocosm This map shows the estimated net immigration (inflows minus outflows) by origin and destination country between 2010 and 2015. Blue circles = positive net migration (more inflows). Red circles = negative net migration (more outflows). Each yellow dot represents 1,000 people. "Nobody is ever just a refugee": Nigerian author Chimamanda Ngozi Adichie calls for a new way of seeing the global migrant crisis — Quartz Feyisa Lilesa, the marathon runner who made an anti-government protest gesture during the Olympic Games, has not returned to Ethiopia. Reporters aboard the Ethiopian team’s return flight from Rio yesterday (Aug 24) said Lilesa was not on the plane. Sports officials did not mention the 26-year-old’s name during a welcome ceremony where government officials greeted the team and decorated them with garlands. Ethiopian state media also omitted mention of him in news reports of the athletes’ return. Lilesa’s agent, Federico Rosa, said the athlete had stayed on in Rio but that he does not know Lilesa’s plans.

The ungrateful refugee: ‘We have no debt to repay’ A few weeks ago I dusted off my expired Iranian passport photo, an unsmiling eight-year-old version of me – stunned, angry, wearing tight grey hijab and staring far beyond the camera. It’s not the face of a child on the verge of rescue, though I would soon escape Iran. I have kept that old photograph hidden since the day I threw away my last headscarf, and now it’s the bewildered face and parted lips, not the scarf, that capture my interest. No matter how hard I try, I can’t reconcile this child with the frazzled American writer in my recent pictures. In 1985, when I was six years old, my family left our home in Isfahan for several months to live in London. The move was temporary, a half-hearted stab at emigration; nonetheless, I was enrolled in school.

Trouble #3: Refugees Welcome – sub.Media Refugees Welcome: Creating Solidarity Across Borders In our current age of resurgent nationalism, anti-migrant xenophobia and increasing border militarization, it can be easy to lose track of the central role that migration has played in shaping the spaces we inhabit. The richness and depth of human history comes from the countless individual and collective journeys that we, or our ancestors before us, have taken to get to where we are now — wherever that might be. The so-called “refugee crisis” that has dominated headlines for the past several years is not a new phenomenon, nor is it a passing phase. As our world stands on the precipice of more destabilizing wars waged over declining resources, a deepening of structural economic inequality and the onset of cataclysmic climate change, even more dramatic movements of human populations are inevitable. What is not yet inevitable is how humanity will respond to this crisis.