Inside Don Draper’s Big Sur Nirvana: The Esalen Institute. How fitting that questing Don wound up at Esalen, still a mecca for the human-potential movement, the counterculture, and the intersection of Emersonianism and Eastern thought. 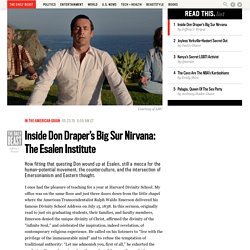 I once had the pleasure of teaching for a year at Harvard Divinity School. My office was on the same floor and just three doors down from the little chapel where the American Transcendentalist Ralph Waldo Emerson delivered his famous Divinity School Address on July 15, 1838. In this sermon, originally read to just six graduating students, their families, and faculty members, Emerson denied the unique divinity of Christ, affirmed the divinity of the "infinite Soul," and celebrated the inspiration, indeed revelation, of contemporary religious experience.

“I am spiritual but not religious.” The phrase has become a well-worn platitude. Esalen’s secular mysticism is distinctly American because it encodes in theological form one of the core principles of the American Constitution—the separation of church and state. Stephen Cave: The 4 stories we tell ourselves about death. 7-science-backed-books-about-spirituality-that-will-change-your-life. These days, it seems like there’s a new spirituality book that comes out almost every other day. 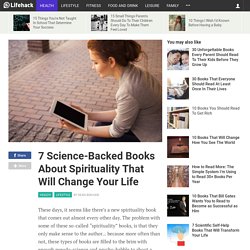 The problem with some of these so-called “spirituality” books, is that they only make sense to the author… because more often than not, these types of books are filled to the brim with enough pseudo-science and psycho-babble to shoot a sci-fi film. And if you’re reading this article, I’d venture to guess that you’re not looking for fictional books about spirituality. That said, today we’ll be outlining a powerful list of 7 science-backed books about spirituality that will (hopefully) help you make some positive strides in the spiritual department. Let’s dive in, shall we? #1. 10% Happier by Dan Harris If you’re a skeptic by nature, then this is the book for you. 10% Happier was written by news anchor, Dan Harris.

. #2. Waking Up is a book that attempts to position itself as the guide to spirituality without religion. . #3. 10 Predictions About the Future Church and Shifting Attendance Patterns. Every generation experiences change. 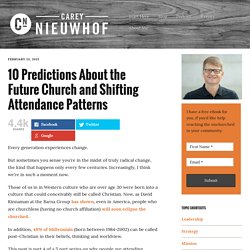 But sometimes you sense you’re in the midst of truly radical change, the kind that happens only every few centuries. Increasingly, I think we’re in such a moment now. Those of us in in Western culture who are over age 30 were born into a culture that could conceivably still be called Christian. Now, as David Kinnaman at the Barna Group has shown, even in America, people who are churchless (having no church affiliation) will soon eclipse the churched. In addition, 48% of Millennials (born between 1984-2002) can be called post-Christian in their beliefs, thinking and worldview. This post is part 4 of a 5 part series on why people are attending church less often. Part 1: 10 Reasons Even Committed Church Attenders Are Attending Less Often Part 2: CNLP Episode 23: Why People Are Attending Church Less Often—An Interview with Will Mancini.

Part 3: 5 Ways to Embrace Infrequent Church Attenders So what will the future church be like? Predictions…Really? On escaping fundamentalism // The Observer. Growing up in a conservative Protestant farm town, you learn from an early age that there is Right and there is Wrong. 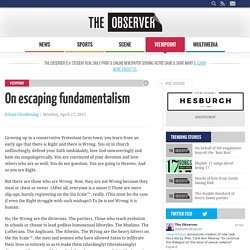 You sit in church unflinchingly, defend your faith unshakably, love God unwaveringly and hate sin unapologetically. You are convinced of your devotion and love others who are as well. You do not question. You are going to Heaven. And so you are Right. But there are those who are Wrong. No, the Wrong are the divorcees. Yet even after growing up inundated by such views, doubt inevitably creeps in. But then mortifying, gut-wrenching guilt razes you. But your inner well of faith you have been filling for years with holiness and Right and steadfast certainty has now begun to leak: slowly, at first, but one day, you wake up and realize there’s no water left.

Of course, at this point, friends and soccer moms and your chill, jeans-clad pastor (Right comes in many shapes and sizes) will begin doing everything in their power to shame you back into submission.