7 Things Healthy People Do Every Morning 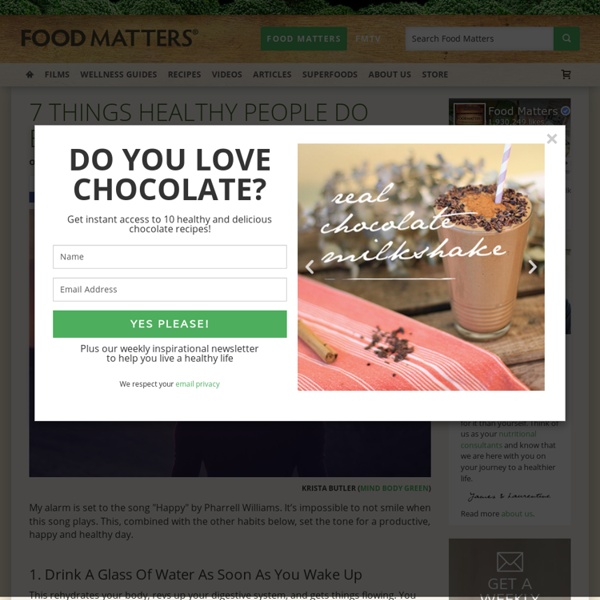 Krista Butler (Mind Body Green) Struggling to get out of bed in the morning with a smile on your face? Every morning we get the chance to be grateful for a new day though sometimes you just aren't 'feeling it'. These 7 things will help you set the tone for a productive, happy and healthy day. My alarm is set to the song "Happy" by Pharrell Williams. 1. This rehydrates your body, revs up your digestive system, and gets things flowing. 2. Do you sleep with your cell phone next to you and grab for it first thing when you wake? 3. This sets the stage for positivity throughout the day. 4. Fill your lungs with fresh air. 5. You don’t necessarily have to do an intense workout before breakfast, but moving your body even a little is a great way to get the blood flowing and shake the body into wake-up mode. 6. Rather than reaching for a box of cereal, focus on getting real foods in your body. 7. Look into the mirror and say something positive to yourself. Related:  improving

11 Morning Rituals That Can Change Your Life Your morning can be that make-or-break time that sets you up for a good day or a bad day. Here are 11 habits you can establish that will put you on the path of stringing together good day after good day. 1. Drink a Glass of Warm Lemon Water Drinking a glass of warm water with lemon first thing in the morning is an excellent way to get your body going. You want the water to be warm so that it’s not a shock to your system first thing in the morning. The Rehydration Process When you wake up in the morning you’ve just gone without water for about 8 hours, so it’s important to turn things around and start up the flow of water again. 2. This is priority one because in order to fit in a fantastic morning you’re going to need some extra time compared to your current routine. The Ideal Time to Wake Up Wake up in conjunction with circadian rhythms if possible. 3. Taking time to scrape your tongue is one morning routine you won’t want to give up once you start it. The Right Scraper 4. 5. 6. 7. 8. 9.

The Right Way to Get Angry Anger is a tool that helps us read and respond to upsetting social situations. But how can you stop it from getting out of hand? Photo: Flickr.com/Pete F. By Todd Kashdan, Robert Biswas-Diener Anger is in itself neither good nor bad—it’s what you do with it that matters. Anger is best viewed as a tool that helps us read and respond to upsetting social situations. When anger arises, we feel called upon to prevent or terminate immediate threats to our welfare, or to the well-being of those we care about. Caution around anger is certainly smart, as is the knowledge that it should not be overused, or used with everyone. How to manage anger When you want to express anger, or any negative emotion, one way to do so is to start with what we call the “discomfort caveat.” The aim of the discomfort caveat is to disarm the person, to keep them from becoming defensive. The obvious difficulty lies in figuring out how to put angry feelings to work, especially in relationships. Think like a chess player.

Creating Healthy Routines Do less think more accomplish big goals Henry Ford once said he didn’t want executives who had to work all the time. He insisted that those who were always in a flurry of activity at their desks were not being the most productive. He wanted people who would clear their desks, prop their feet up and dream some fresh dreams. His philosophy was that only he who has the luxury of time can originate a creative thought. Wow! This week I heard from a gentleman who has spent the last three years hiking and living in an isolated old farm house. The Apostle Paul took long walks between cities, using the time to think and talk. Thomas Edison would go down to the water’s edge each morning, throw out his line – with no bait – and then watch the bobber for an hour until his thinking was ready for the day. If you are feeling stuck, your solution may not be in doing more, but in taking a break from the “busyness” of life.

11 Awesome Hangover Cures | Hang Over Remedies | MANjr Hangovers are the worst. That nasty combo of headache, nausea and gut-pain can cost you precious hours of your life. While there are certainly preventative measures you can take to reduce the likelihood of a hangover (headache medication, food, lots of water before bed, etc.), inevitably you’re going to get stuck with a dirty hangover that you need to crush before it kills your day. Here are 11 awesome hangover cures that you can turn to when you need to ease the pain. 11. Ginger is an all-purpose digestive aid. 10. Honey is a great antioxidant that’s loaded with fructose and glucose. 9. For desert drunks, the prickly pear is a solid morning option that’ll help take the edge off the hurt. 8. Yep, eggs. 7. Oh the sweet, sweet nectar of Coca Cola can do wonders for a messed up belly. 6. Whether you’re pounding pancakes at IHOP, feasting on French toast at Norm’s or plowing through Moons Over My Hammy at Denny’s, greasy-ass diner food will help you booze-coated belly correct itself. 5. 4.

Tailor Your Presentation to Fit the Culture - Erin Meyer Fourteen years ago I moved from Chicago to Paris. The first time I ran a training session in France, I prepared thoroughly, considering how to give the most persuasive presentation possible. I practiced my points, and anticipated questions that might arise. The day of the session, my actions were guided by the lessons I had learned from many successful years of training in the U.S. But the group did not seem to be responding as usual, and soon the first hand came up. The interruptions seemed out of place, even arrogant. The stonewall I had run into was “principles-first reasoning” (sometimes referred to as deductive reasoning), which derives conclusions or facts from general principles or concepts. But as an American, I had been immersed throughout my life in “applications-first reasoning” (sometimes referred to as inductive reasoning), in which general conclusions are reached based on a pattern of factual observations from the real world. When working with applications-first people:

untitled How to Deal with a Mean Colleague - Amy Gallo When a colleague is mean to you, it can be hard to know how to respond. Some people are tempted to let aggressive behavior slide in the hopes that the person will stop. Others find themselves fighting back. When you’re being treated poorly by a coworker how can you change the dynamic? And if the behavior persists or worsens, how do you know when you’re dealing with a true bully? What the Experts Say“When it comes to bad behavior at work, there’s a broad spectrum,” with outright bullies on one end and people who are simply rude on the other, says Michele Woodward, an executive coach and host of HBR’s recent webinar: “Bullies, Jerks, and Other Annoyances: Identify and Defuse the Difficult People at Work.” Understand whyThe first step is to understand what’s causing the behavior. Look at what you’re doingThese situations also require introspection. Stand up for yourselfDon’t be afraid to call out the bad behavior when it happens. Principles to Remember Do: Don’t: